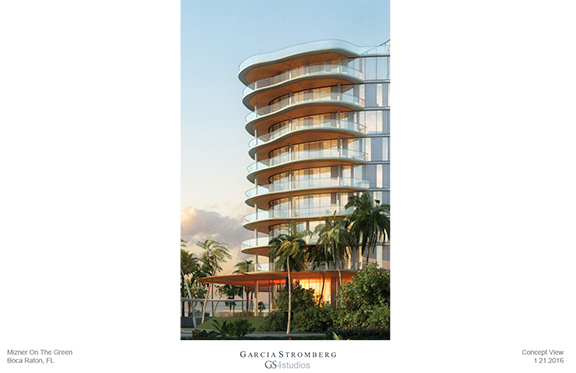 The latest version of plans for Mizner on the Green are for a nine-story, all-residential tower with about 384 luxury condominiums. Rendering courtesy of Garcia Stromberg

Will the third time be the charm for developer Elad National Properties?
The Plantation-based company submitted preliminary plans to the City of Boca Raton on Jan. 5 for yet another vision of what it wants to build on the site of Mizner on the Green on Southeast Mizner Boulevard.
The latest proposal, named Mizner 200, calls for one all-residential building with about 384 luxury condo units on the nearly 9-acre site. In a significant departure from past proposals, this project would be nine stories, or 100 feet tall — exactly in line with the city’s height limits for that part of downtown.
Features along Mizner Boulevard would include covered walkways, trellised sitting zones, park areas and gallery space. The roof would be available for social events. The average condo size is 2,000 square feet.
The project also meets the city’s requirements for open space.
Mizner on the Green’s 18, three-story buildings with 246 rental units would be demolished.
The developer’s representatives met with city planning staff on Jan. 19. The staff has asked for more, largely technical, information, but did not indicate any major objections.
Staff members did advise that Elad should present its plans to nearby residents.
Elad stunned downtown Boca Raton residents in September 2014 when it unveiled plans for 500 luxury condos designed by prominent “starchitect” Daniel Libeskind. The project’s four towers rising as high as 30 stories well exceeded the height limits and drew impassioned objections from downtown activists who don’t want the city to lose its low-rise look.
When that proposal proved to be a nonstarter, Elad returned to the city last May with a completely new condo project called Sol-A-Mar, designed by the West Palm Beach architectural firm Garcia Stromberg. Four of the seven buildings would have 13 stories — once again more than allowed.
Elad asked for “two minor amendments” to downtown development rules that would have allowed the project to proceed, but city officials rebuffed the request.
This time around, Elad is seeking no variances for Mizner 200, also designed by Garcia Stromberg.
Elad will submit final plans to the city this month, chief executive Amnon Safran said in a statement.
“We plan to soon meet with our neighboring residents and businesses so that city staff and officials, residents and businesses and prospective buyers understand all of the benefits to be enjoyed by our pedestrian-friendly residences,” he said.
Andrea O’Rourke, the newly named editor of the watchdog website BocaWatch.org, said it is more likely that the proposed project’s neighbors and other downtown residents will accept Mizner 200.
“I think this is a case where citizens had an impact,” she said. “To come into the community and think you can build 400-foot skyscrapers was completely off the charts.”