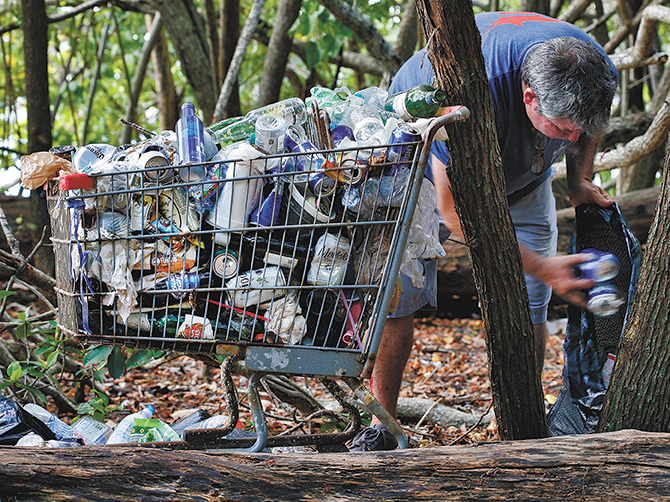 Brent Robinson picks up a can near a shopping cart he found filled with trash at Lake Wyman.

Bruce Hurley discovered something when he organized a cleanup day for the shore along Lake Wyman: Environmental stewardship can be challenging.
“It’s my going-away present to Boca,” Hurley said before the cleanup, held July 16 on the west side of the Intracoastal Waterway, facing Gumbo Limbo nature preserve and backing onto Rutherford Park.
He had long been planning a move to North Carolina with his son, Grayson, and wife, Mary Ellen, on Aug. 8. The cleanup idea stemmed from a wilderness adventure day he went on with Grayson over a month ago. They went deep into a wilderness pocket at Lake Wyman Park that Hurley had explored while he was in high school in Boca Raton.
Today, the park is overgrown and the pathway into it is barely visible. When Hurley, 52, took his son through it, they had to traipse over uprooted trees, avoid natural booby traps and elude the abandoned boardwalk. They also saw a remarkable number of hermit and land crabs, spiders and birds, to the delight of Hurley’s son. But when they reached the shoreline, they were in for a big surprise.
“The only downside of our day was the shameful amount of garbage,” Hurley said. “We even found a shopping cart filled with garbage and junk.” 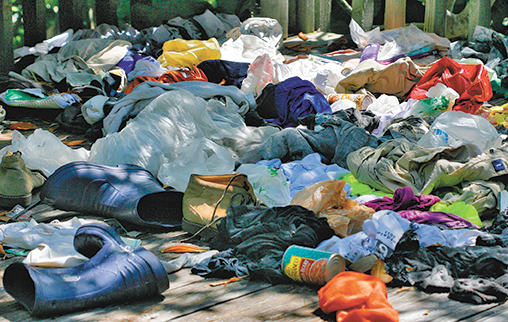 This debris marred the natural beauty of the shoreline, and Hurley was both incensed and inspired.
He immediately decided to organize a Lake Wyman natural area cleanup — as his parting gift to the city and an exercise in environmental activism.
Little did he know how much effort it would take. Just a few people came forward after his call to action — perhaps because the July heat was already in the high 90s in the morning.
One dedicated soul was Brent Robinson, the owner of Robinson’s Nursery and Landscaping, who volunteered to get permits from four agencies so the cleanup could proceed.
Robinson contacted the state Department of Environmental Protection, the Florida Inland Navigation District, the Boca Raton Recreation Services Department and the Gumbo Limbo Nature Center. Gumbo Limbo provided the insurance release forms and cleanup equipment.
“Gumbo Limbo was very supportive,” said Robinson as he unloaded his truck. “They contributed garbage bags, grab-its and gloves. And they will pick up the garbage at the end of the day.” 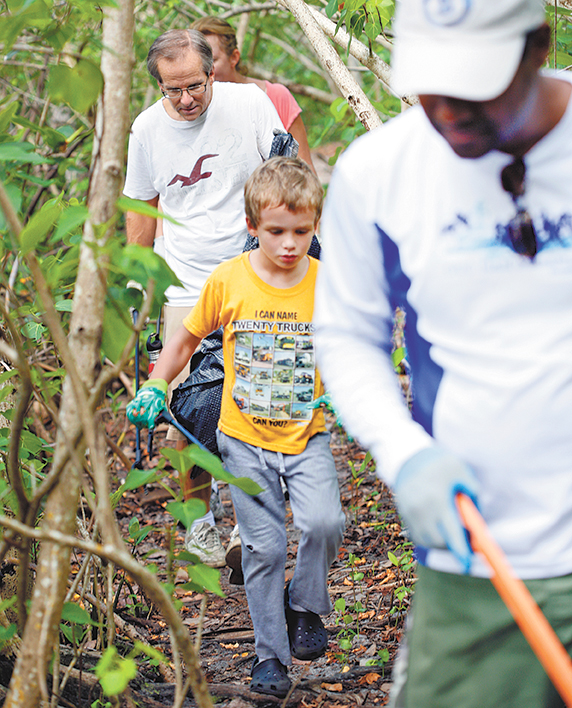 Bruce Hurley (rear) and his son, Grayson, forge into the wooded area at Lake Wyman Park.

Hurley and nursery owner Brent Robinson organized a cleanup to collect trash from the park’s cluttered path and lagoon.

Robinson showed up early for the cleanup, accompanied by his young daughter. He joined Hurley, Grayson and Mary Ellen, plus another volunteer, Mahesh Neelakanta.
Neelakanta had seen Hurley’s “call for action” on a Facebook page. He decided to participate because Lake Wyman Park’s wilderness is a place to go exploring with his young son, Tenzin.
“This is as close as you can come to a wooded area in Boca,” he said. “You have to get that area cleaned up so that parents can take their kids in and go exploring.”
This small but dedicated group set out southward to find the overgrown entrance to the path. They struggled through the brush, finally reaching the shoreline of Lake Wyman, where they started bagging refuse in earnest. They found garbage ranging from bottles and beer cans to plastic bags and Styrofoam pieces. As they picked up more and more debris, the bags kept getting heavier and heavier.
Mary Ellen Hurley and Neelakanta decided to turn around and walk out of the park with three large bags each. The rest of the group walked on. By the time they reached the central part of the shore and spied the end of the Rutherford Park boardwalk, they realized they had had enough.
“We decided to leave some bags behind and come back later. They had just gotten too heavy for us to haul back,” said Bruce Hurley, as he emerged from the shore with his tired companions.
Robinson offered to bring a crew in from his company to haul out the remaining bags in the next day or two into the parking lot.
But Hurley wasn’t satisfied. “There is at least 30 bags’ worth of garbage still there to get, plus two shopping carts to haul out,” he said.
More debris had accumulated than Hurley remembered from a month ago. Some of it, such as the Styrofoam, seemed likely to have floated in from boats on the Intracoastal. But other items looked like they had come from people passing through and just leaving garbage behind.
Not willing to give up, Hurley started calling upon friends and neighbors right away to join him for another possible excursion to finish the cleanup before his August departure. He was also determined to find someone with a boat to help haul away the bags and shopping carts.
“But that won’t be the end of it,” Hurley said. “More garbage is bound to accumulate. The challenge will be to keep the place cleaned up. It’s a great piece of wilderness. I’m hoping people will go and visit it, and then come out carrying garbage bags with any refuse they find.”
Hurley talks about his departure wistfully, even though he’s looking forward to settling in a new region after living in Boca Raton for 50 years. He recently wrote to friends online that, “My home is wherever my family is, but a big part of my heart will always belong to Boca.”