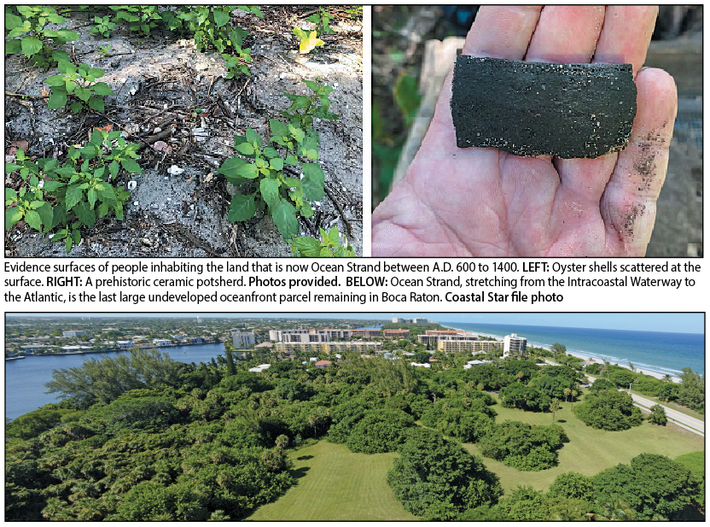 An indigenous tribe that populated what is now Ocean Strand is casting a centuries-old shadow over plans to quickly turn the land into a minimal park.
An archaeology team’s discovery of an ax-like adze, fashioned from a whelk shell, and eight potsherds, or pieces of prehistoric pottery, makes the parcel eligible for the National Register of Historic Places. As a result, removal of the invasive Brazilian pepper trees overtaking the property will be more tedious — and more costly.
“All tree removal must now be done by hand and under the supervision of a representative from the archaeological group who provided the assessment,” Briann Harms, executive director of the Greater Boca Raton Beach and Park District, told district commissioners at their May 17 meeting.
Additionally, the team recommended that vegetation “should not be pulled from the ground, but should be cut above the ground surface.”
Before Harms can price what the changes will cost, she said, she will submit a revised plan to the city, then recalculate square footages for asphalt and mulch path installation, and estimate the number of days needed for archaeological supervision.
“The revised plan allows for the cleanup of the central hammock by hand with archaeological oversight and provides for an ADA-accessible path into the park and to a picnic table near the current asphalt path. Mulch trails will be utilized in other areas of the park,” she said.
Harms also said the district should forgo removing Brazilian pepper on the north and south sides of Ocean Strand and concentrate on the center area where the path will be.
“For a pedestrian park it doesn’t seem the best use of taxpayer dollars,” she said.
Commissioners approved trimming the park’s $600,000 construction budget by almost $279,000 meant to cover machine-clearing of the exotic growth. They originally budgeted $75,000 in March 2020 for the whole project with hopes of opening the park by last September. Decisions to make Ocean Strand, located north of the Gumbo Limbo Nature Center, accessible to people with disabilities and to pay for the city-required archaeology report added to the price.
Robert Carr, executive director of the not-for-profit Archaeological and Historical Conservancy, which conducted the $4,800 study, said Ocean Strand is “likely to provide valuable information about the prehistory of the area.”
“The discovery of the site does not preclude park improvements; however, the improvements should avoid direct impacts to the principal site area,” his group reported.
The principal site is roughly the western half of the parkland west of State Road A1A. Carr’s team did not study the beachfront portion east of the highway. The midden, or waste heap, is “dense with oyster shell, with some faunal bone and ceramics,” the archaeologists said. The sherds date the site to A.D. 600 to 1400.
Commissioner Craig Ehrnst asked whether the district could enlist volunteers to clear exotic vegetation and keep costs down.
“The midden thing looks like an obstacle, but I guess I look at it more as an opportunity,” he said. “It creates another special component of the whole park that will preserve it.”
Further development of the park will require up to $1 million for more archaeological studies and three to five years to complete, Harms said.
In the meantime, she said, a family that did not want to be identified yet wants to make a “significant” donation to the park in exchange for placement of a couple of benches and a plaque to remember a son’s untimely death.
She will ask the commission to approve a document detailing the contribution at a future meeting.