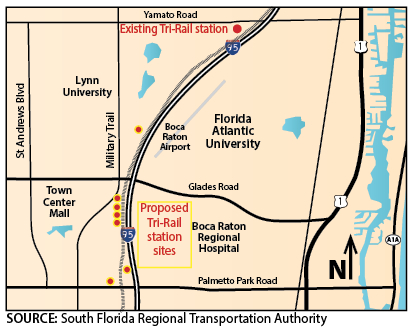 Tri-Rail officials are launching a new study to evaluate a proposed second Tri-Rail station in Boca Raton, a step forward in station planning that started in 2007 when the commuter rail identified a possible location near Glades Road and Military Trail.
The South Florida Regional Transportation Authority, which operates Tri-Rail, held “kickoff” meetings on Aug. 29 and 30 at the Spanish River Library to let the public and elected officials know about the study, possible station locations and a schedule for next steps.
Developer Crocker Partners wants the new station, which would benefit its desire to create a large “live, work, play” development on a large area west of Interstate 95 and east of the Town Center at Boca Raton.
Crocker envisions adding 2,500 residential units in an area where none now exists in a development where new residents would walk or take a shuttle to their jobs at nearby office buildings or retail stores, and head out after work to restaurants and nightlife.
Tri-Rail could transport them around South Florida, while people who live elsewhere could ride the commuter train to the area to work, eat or shop.
At the meetings, SFRTA officials showed seven possible station locations along the CSX railroad tracks from just north of Glades Road to just north of Palmetto Park Road. One parcel is owned by the city, another by the Florida Department of Transportation, and five are privately owned.
Crocker owns four of those parcels, including the site of the former King’s Deli at Northwest 19th Street.
SFRTA’s tentative timetable shows a project development and environment study taking place this year, followed by station design in 2018-19, right of way acquisition in 2018-21 and construction in 2022.
A 2016 study determined that a new “kiss and ride” station with no parking lot is feasible and the approximately 1,000 weekday riders who are projected to use it is a sufficient number to support construction. The number of riders is expected to increase if Crocker builds new residential units.
SFRTA, though, is not yet committed to building it.
County Commissioner Steve Abrams, who chairs SFRTA’s governing board, said before the meetings that the station “probably would not be as high a priority” if Crocker doesn’t get approval to build.
City Council member Andrea O’Rourke outlined a number of concerns at the Aug. 30 meeting.  The biggest, or the “elephant in the room,” she said, was the perception of some residents that SFRTA is considering a station largely because Crocker wants it and new residential units would boost ridership.
“The perception is Midtown depends on the Tri-Rail station being built,” she said after the meeting. “Which came first, the chicken or the egg? That is the question in the community.”
SFRTA officials said that the station was under consideration before Crocker first proposed Midtown about four years ago. Its possible location was first identified in 2007 and included in a long-range plan in 2008, SFRTA deputy executive director C. Mikel Oglesby said after the meeting.
That led to funding by the state DOT and the county’s Metropolitan Planning organization. Those two agencies have made available $18.5 million so far.
That amount wouldn’t cover all the costs of planning and building a station, Oglesby said. SFRTA is updating cost estimates and will have a better idea of how much more it will need next summer.
Crocker Partners has floated the idea of donating land for the station. SFRTA officials confirm they were approached about this, but it was premature at the time to discuss the matter. They said they will do so when they have a firmer idea of where the station should be located.
The busiest Tri-Rail station along its 72-mile line is the existing Boca Raton station at Yamato Road.