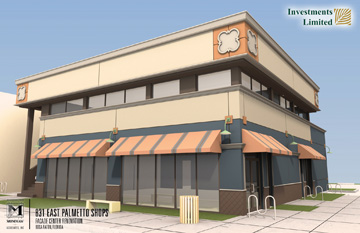 The proposed expansion of  building on East Palmetto Road also calls for a facelift for the building.

A plan to expand and redevelop a building on East Palmetto Park Road narrowly won approval from the Planning and Zoning Board after dozens of merchants and neighbors voiced opposition.

The plan, presented during an Aug. 18 meeting at City Hall, calls for a 777-square-foot addition to the building at 831 E. Palmetto Park Road.

Armen Batmasian of Investments Limited, owner of the property, said the building and the shopping center are outdated, and the company has been struggling to find tenants.

Approval of the plan, the residents said, would bring a 7-Eleven convenience store to the store space, when the shopping area already has two convenience stores and doesn’t want or need a third.

The vote to approve was 4-3, with Grace Johnson, Arnold Sevell and Kenny Koen dissenting.

Board member Steve Utrech said he liked the idea of money being put into redeveloping the area and hated to tell any developer “that we don’t want to move the ball forward.”

But even before the steady stream of residents opposing the site plan could speak, board member Grace Johnson and city planner Daryl Johnson made it clear that the board had no control over the use of the building.

The zoning code determines use, Grace Johnson said. So a 7-Eleven could go in with or without the proposed expansion.

Expansion of the retail area is the first step in a plan to redevelop the entire city block, said Douglas Mummaw, architect for Investments Limited.

“We propose to completely reform this aging asset into something that retail businesses, both local and national businesses, would want to lease and then serve the neighboring community,” Mummaw said.

“The project before you is a very simple request,” Mummaw said. “We’re asking for an increase of less than five and a half percent of the overall density to expand our retail area in this one particular building.”

The plan, which includes a façade remodel, also calls for four handicap-accessible parking spaces where there were none, circulation routes and an articulation of entrance points to Palmetto Park Road, Mummaw said.

It reconfigures the parking lots to provide 74 spaces, where only 67 are required according to shared parking calculations. A new bus stop would also be added.

Five residential units occupy the second floor. A lease has not yet been signed for the first floor of the building, Mummaw said.

But many residents at the meeting weren’t buying that, saying maybe a lease with 7-Eleven hadn’t been signed yet, but surely it would be. 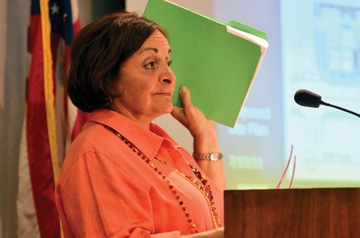 the P&Z board opposing the expansion of the property. Photo by Jerry Lower

Diane Hoffman, owner of the Boca Beach House at 887 E. Palmetto Park Road, delivered a petition signed by more than 200 residents opposed to a 7-Eleven moving in to the shopping area. She said she had spoken to Batmasian and he told her about his desire to lease the building to 7-Eleven.

“We don’t want this for several reasons,” Hoffman, whose home is directly behind the building set for expansion, said.

She said she worries about delivery trucks’ light coming into her home at night, property values dropping, not enough parking and vagrants hanging out around the store.

Hoffman’s husband, Howard Hoffman, asked that the vote be postponed until February.

“No one has been notified and I think this has been done strategically when people aren’t here. I’d like a traffic report done when there is traffic,” he said. (A traffic study was done in late April).

City staff said proper notice had been given with signs posted and newspaper notification. But merchants argued that the signs weren’t up long enough and many hadn’t seen them.

Doris Majhess, a local Realtor, said a 7-Eleven with increased parking demands could hurt real estate values in the area.

“People pay big money to live here and they won’t with a 7-Eleven,” Majhess said.