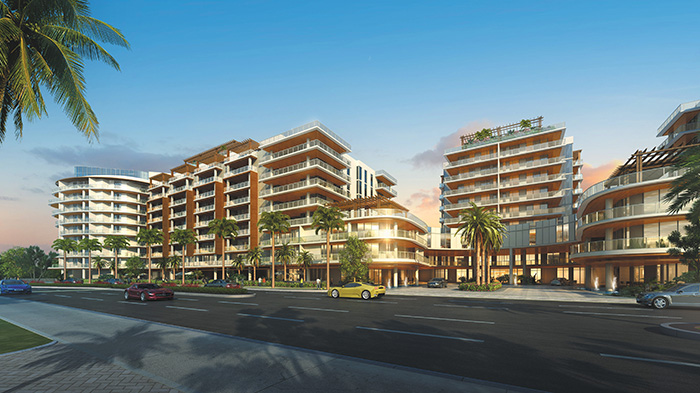 The latest plan for Mizner 200 has buildings connected on only the first two floors.

The developer of Mizner 200 has made substantial changes to its design since initially submitting plans, but the luxury condominium project continues to draw opposition.
Investments Ltd., the largest owner of commercial properties in downtown Boca Raton, is siding with residents who complain the project is too massive and does not comply with a city ordinance governing downtown development.
Investments Ltd., led by James Batmasian, is hardly a neutral observer. It is planning a complete makeover of its Royal Palm Place, a 14-acre shopping and dining destination that also includes luxury rentals and office space. Located between Federal Highway and Southeast Mizner Boulevard south of Palmetto Park Road, it sits just west of the proposed Mizner 200.
The two developments are very different. Mizner 200 would be entirely residential, with between 340 and 384 units. The revamped Royal Palm Place would continue to be mixed use, but its residential component would compete with Mizner 200.
Representatives of Mizner 200 developer Elad National Properties and architect Garcia Stromberg/GS4Studios have met with Royal Palm Place representatives, said Royal Palm Place architect Doug Mummaw.
“We voiced our concerns at that meeting,” he said. “We talked about how to make good connectivity between the two properties. We had a good dialogue but … there is some work to be done.”
Mummaw cited Mizner 200’s length of about 900 feet and contends it does not comply with design elements of the development ordinance. It also will block water views for neighboring property owners, including Royal Palm Place.
“It is a very massive building,” he said.
Investments Ltd. may be ready to submit plans to the city in August for two of the seven project phases it plans for Royal Palm Place, Mummaw said.
Investments Ltd. submitted plans in 2014 but withdrew them in December. The revised proposal will be “really similar” to the earlier plan, with the project components, density and scale largely unchanged, he said.
The seven buildings would vary in height from three to 14 stories, Mummaw said. The project would fall under the city’s interim design guidelines for that part of downtown, which allow buildings to rise to 140 feet, with an additional 20 feet for decorative features.
Elad has radically changed its plans for Mizner 200 since it first proposed four towers that rose as high as 30 stories, greatly exceeding the 100-foot height limit at its location.
Faced with an outcry from downtown residents, Elad reduced the project in January to nine stories — exactly what the city allows.
Three months later, it cut square footage by 10 percent, decreased the average size of units to 2,000 square feet, increased setbacks and added more green space.
It also divided the building, in effect, into three sections connected only on the first and second floors, which softens the building’s appearance and opens sight lines to the east.
Many residents were pleasantly surprised by the redesign, but opposition has not melted. Downtown activists drafted a “white paper” faulting the building’s size and design.
The strongest complaints are coming from residents of Townsend Place condos, including Boca Beautiful President John Gore, who object to the size of the project and say it will block their water views. Their condos are immediately to the south of Mizner 200.
A number of critics attended a June 7 meeting of the city’s Community Appearance Board where architect Peter Stromberg presented the changed design. Because this was a preliminary presentation, board members took no action, but several offered suggestions to improve aesthetics, said Vice Chair Mark Jacobsen, a landscape architect.
“Two or three architects on the board would like the façade to be stepped back from (Mizner Boulevard) a bit,” he said. “For the most part, I think it was relatively well received by the board.”
While Elad has submitted its plans to the city, further changes apparently are still being made.
“They said they were in the design process and continuing to refine things,” Jacobsen said.
Elad did not answer questions from The Coastal Star about any more design changes, except to say, “We are working together with city staff in order to finalize our plans.”