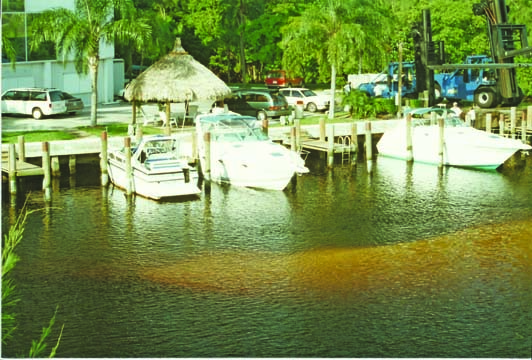 Photo provided by Marina One

Boaters are having a tough time navigating around dangerous silt shoals that have built up in the Hillsboro Canal over the last two years. Seeing no help coming from city governments, a group of local residents took the helm and raised $50,000 to get a dredging project started.

Tom Tyghem, co-owner of Marina One on the canal, gave $15,000 for the project. He and the other donors petitioned Boca Raton and Deerfield Beach, the cities that maintain the canal, to put dredging on the agenda for government funding.

“In the last 24 months it started to silt in, and boats are running aground. At low tide in some areas, the canal is almost impassable. I’ve lost customers over it,” Tyghem said

The busy waterway, which forms the boundary between Palm Beach and Broward counties, is a major connection to the Intracoastal Waterway and ocean. Boca residents have more than 1,400 boats docked on the canal, and many more boaters use the canal boat ramp in Deerfield Beach.

As conditions worsen, more boaters are getting stuck in the silt and more business owners are worrying about their future. Home and condo owners on the canal fear declining property values if they can’t use their boats.

“Boaters can get into trouble real quick,” said Gene Folden, chairman of the Boca Raton Marine Advisory Board. “We’re trying to address the problem before it’s intolerable. There is navigable water, but you have to know where it is. There are not a lot of markers indicating where deep water is.”

The last time the canal was cleared and deepened was 16 years ago. Dredging is long overdue, boaters and officials agree.

Boca Raton, on the north bank of the canal, and Deerfield Beach, on the south bank, have each contributed $25,000 toward the project, said Jennifer Bistyga, engineer with the city of Boca Raton. The total — including the residents’ contribution — of $100,000 will be used for studies and permits, the first step to getting the dredging project approved.

“We applied for a grant (for dredging) from the Florida Inland Navigation District. We filled out a lengthy application and submitted it April 1,” Bistyga said, adding that the city was preparing to make its case for the grant with a five-minute presentation that discusses phase one of the project.

The city will find out if it received the grant, and the amount it could receive, in September.

The two cities and private donors could potentially get 75 percent of their money back from the grant, she said.

There are no projections for the cost of the dredging project. That won’t be known until the bids come in.

“The canal needs to be investigated, and we will need to determine the areas of greatest concern,” she said.

Bistyga is optimistic the cities will get the money to fix the canal. “It depends on where we fall on their (the Florida Inland Navigation District) priority list. I think we have a good chance.”

Boaters who use the canal can thank local residents who put up money for pushing the project forward.

“I think it’s wonderful they were able to come together for this cause,” she said.