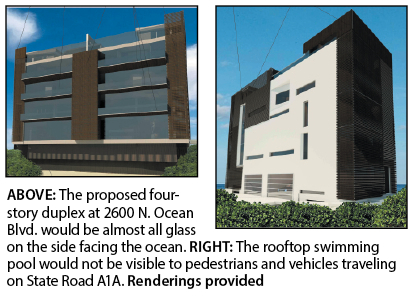 A long-anticipated review of controversial plans to build a four-story duplex on Boca Raton’s beach has been delayed indefinitely.
The city’s Environmental Advisory Board was scheduled to review the proposal for 2600 N. Ocean Blvd. on Oct. 18, but its meeting was canceled Oct. 12.
“The applicant for 2600 submitted last-minute revisions to the plans that required review by staff and the consultant,” city spokeswoman Chrissy Gibson said. “I don’t have an estimate on how long that might take, but the item will be rescheduled for EAB when staff and consultants have had time to review the changes.”
Property owner Grand Bank N.A. proposes building each side of its 14,270-square-foot duplex with four bedrooms, five and one-half baths, a glass elevator and a four-car garage, according to Delray Beach-based Azure Development, which is marketing the site. The duplex would also have a 40-foot boardwalk and a rooftop swimming pool.
The site needs the Boca Raton City Council to grant a variance for building seaward of Florida’s restrictive Coastal Construction Control Line. The City Charter directs the Environmental Advisory Board to advise council members “on the environmental impact of proposed developments which contain environmentally sensitive lands, listed species, or wetlands … and to recommend ways in which adverse environmental impact might be minimized.”
The idea of building on the beach erupted into public view in 2015 when the council approved a variance for the owner of 2500 N. Ocean Blvd. two lots south to build a four-story, 10,432-square-foot “mini-mansion.”
Both lots are east of State Road A1A between Spanish River Park and the undeveloped Ocean Strand parcel.
“2500 is under review and has not been scheduled,” Gibson said.
The council’s newest member, Andy Thomson, reported Oct. 23 that a lawyer for 2600 N. Ocean told him the owner is still willing to sell the lot. The council told city staff to ask if the price has come down.