IBM is often credited with cementing the place on the map for this little city on the south end of Palm Beach County. And the company and an initial group of 12 engineers then went on to change the world.
“We were given the job of coming up with a personal computer,” recalled retired IBM engineer Dave Bradley, 68, one of the “dirty dozen” IBM engineers who in 1980 were given the top-secret job of developing the company’s first personal computer. 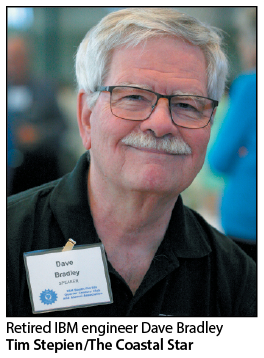 “We were all believers. Many of us were personal computer owners who had built our own or had purchased one. Each of the 12 had a particular expertise,” he said. “Mine was hardware/software interface, the code that makes the hardware work.”
The PC prototype they conceived, designed and shipped in a year’s time revolutionized the world.
Bradley cracked a roguish grin and modestly described his most publicized contribution to the computer world last month during IBM’s 50th-anniversary celebration of moving to town.
“I invented ‘control-alt-delete,’ ” he said, chuckling about the key combination that reboots PCs worldwide.
Speaking against a backdrop of vintage IBM computers, historical photographs and a room filled with former IBM employees, Bradley recalled IBM’s start. It was a time of hush-hush glory days when IBM set up shop in what has since been renamed the Boca Raton Innovation Campus at 5000 T-Rex Ave., where last month’s celebration took place.
The group eventually grew to include 50-60 more engineers, and that was just the beginning.
“As an engineer, it was the dream project,” Bradley said. “When IBM’s PC was announced, [the workforce] went from about 500 people to 10,000. We took over almost all of the office space in Boca.”
Bradley made headlines years ago when he joined Microsoft Chairman Bill Gates and several other pioneers of the PC industry at an event celebrating IBM’s 20th anniversary. Bradley was asked to talk about the control-alt-delete command.
After explaining that he created the shortcut to solve a problem, he quipped as Gates looked on: “I have to share the credit. I may have invented it, but I think Bill made it famous.”
In 2002, Bradley’s “control-alt-delete” appeared on Jeopardy! in the category of “computer history.” The answer was, “IBM engineer Dave Bradley is called the father of this multikey combination.”

IBM led Boca’s growth
The PC put Boca on the map, said Susan Gillis, curator at the Boca Raton Historical Society.
“It brought a lot of employees to town with the families. Because this became the center for PC operations which revolutionized the world, it was very exciting,” Gillis said. “Back in the day, they called this the ‘Silicon Beach.’”
And security at the time was tighter than tight.
“It was like the Pentagon — you couldn’t go in there,” Gillis said of IBM’s old headquarters.
“Everything was so top secret. It’s only in hindsight we get to see how important those baby steps were. The PC and her descendants had their birth in Boca.”
At the time, the engineers who worked on it had no inkling of its future impact.
“It was all even a very top-secret thing in IBM — you couldn’t talk about it. Rumors started,” Bradley recalled. “I hoped it was going to be successful — you always hoped things would be successful. I didn’t think it was going to change the world.”
IBM former senior executive Peter Martinez urged those who attended the anniversary celebration to consider what life without the PC might have been like. “The internet would have never happened,” Martinez said.
What did happen is that the PC became a standard for distribution around the world; it became a multibillion-dollar business and it transformed every other industry related to technology because of the volumes that were generated, Martinez noted.
Retired IBM engineer Fred Goetz, 89, another of the “dirty dozen,” recalled how the 12 engineers got their marching orders. It was a convoluted path.
“I’ll tell you the way it happened, the way it started. We were introducing a dumb terminal that talked to the mainframe. Our chairman of the board said that’s a good machine but it’s not going to stop Apple [computers] from eroding our beaches. He gave us two weeks. The team came back to Boca and we got the best guys for the different aspects of the computer.”
But when they presented their ideas to the board, they got a thumbs down.
“They said the ‘B’ in IBM is for business, not toys, so they voted it down. They didn’t want anything to do with it because they thought it was a toy,” Goetz recalled.
But CEO Frank Cary was intrigued.
“He said, ‘I think there is something to this.’ He said, ‘I have to get out in 11 months because I will be 60 — you have 11 months to do this because my signature is good for millions of dollars,’” Goetz said.
“So, we came back down to Boca to get to work. We did it. And then the illustrious forecasters who were mainly mainframe guys said you guys will only sell 50,000 of those systems over five years,” Goetz recalled laughing. “In three weeks we had 60,000 orders and then all hell broke loose — we had to find vendors, we had to find people.”
The rest is history.
In addition to developing the PC, IBM employees helped build Boca Raton Hospital, founded Temple Beth El and other houses of worship and raised the standard of education throughout the city because they wanted good schools for their own children, Gillis noted.
Although the company had moved its facilities away by the mid-1990s, IBM made an indelible mark on Boca Raton.
“The employees put in many, many volunteer hours all over town,” Gillis said. “They contributed to the quality of life in all aspects.” 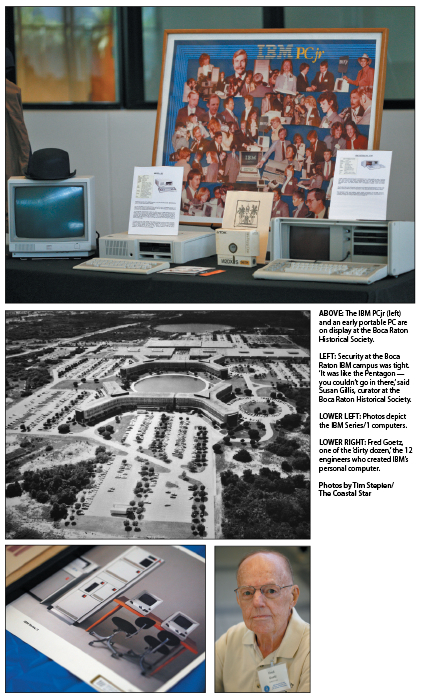