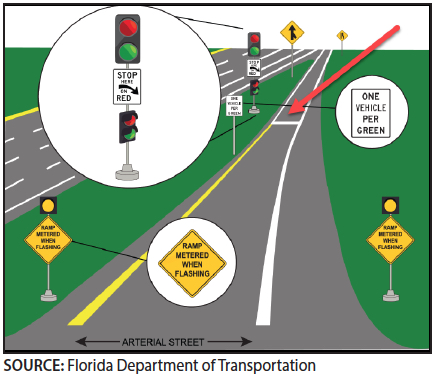 State transportation officials have turned off traffic signals on Interstate 95 entrance ramps at Palmetto Park Road less than a month after activating them.
The signals were turned on at Palmetto Park Road on Jan. 31, making the interchange the first in Palm Beach County to have such devices. Ramp signals were also activated that day at the Atlantic Boulevard interchange in Pompano Beach and the Cypress Creek Road interchange in Fort Lauderdale.
The Palmetto signals were turned off “due to backups onto the arterial streets during the peak periods,” said Guillermo Canedo, spokesman for the local Florida Department of Transportation office.
The department “is exploring a range of improvements to address the queue backup issues before reactivating those ramp signals,” he said. “They will remain off for now.”
Also deactivated were the signals at Atlantic southbound and Cypress northbound. Those at Atlantic northbound and Cypress southbound are still operating.
Despite the setback Canedo said the activation has gone well, “meaning there has been a mid-to-high rate of compliance and a low incidence of crashes, only one at Atlantic on Feb. 14.”
The signals are designed to help control the entry of vehicles onto the interstate and improve traffic flow during rush hour. The FDOT says ramp signal systems have proved successful in managing traffic and reducing congestion in high-volume locations around the country.
Some backups happen when a driver does not pull far enough forward to activate the sensor loops at the ramp signal, Canedo said. Consequently, the ramp signal will not turn green, but will stay on red.
“The ramp signals should cycle every 3-5 seconds. If it doesn’t turn green, the sensors don’t see you,” Canedo said. “Please ask drivers to pull up all the way to the stop bar so the system sensors are activated.”
The stop bar is a white line painted across the road.
Ramps at Glades Road in Boca Raton and Linton Boulevard in Delray Beach will get ramp signals in the future as the Department of Transportation extends express lanes north. Glades Road, with its distinctive “diverging diamond” interchange design, is scheduled to open in late 2023.