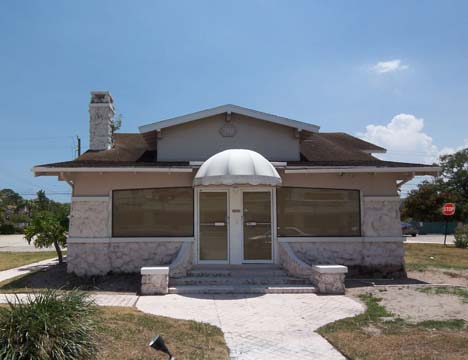 Some want to save The Luff House, one of Boca Raton’s earlier bungalow-style homes.

Talk about the Luff House and the battle to save the old bungalow resurfaced recently.

Boca Raton pioneers Theodore and Harriet Luff had the house — with a coral rock chimney and front porch — built in the 1920s at 390 E. Palmetto Park Road. As the street became more commercial, the bungalow housed several businesses.

For sveral years, the 2,492-square-foot, two-story structure languished vacant while the real estate market was in a recession. A small tree now is sprouting from its chimney.

But now that the market is back, the area is abuzz about a mega-development across the road and its effect on the neighborhood. The Archstone Palmetto Park Place and its 378 apartments are planned for 5.8 acres on East Palmetto Park Road’s north side.

Part of that limelight reflects on the Luff House, which sits on the south side. The structure, though old, was never designated historic.

The problem is money.

“People are interested in seeing it moved, but nothing has been done,” said Mary Csar, executive director of the Historical Society.

Its previous owner, developer Greg Talbott, had offered the home to the Historical Society if it would pay to move it, Csar said. Her organization received a bid in November 2006, showing the moving costs to Silver Palm Park, just three blocks to the east, and foundation work to be $136,850, plus thousands more for the utility connections.

But neither the city nor the Historical Society has that money, Csar said.

The current owner is a limited partnership set up by credit-card processor Applied Card Systems, when it gained title to the property in January 2010. The Glen Mills, Pa.-based company has offices in Boca Raton. The local representative, John MacConnell, declined to discuss his company’s plans for the Luff House.

Boca Raton native Arlene Owens, secretary of the Boca Raton Pioneers group and a member of the Historic Preservation Board, has fond memories of the Luff House.

“I used to visit it as a child,” said Owens, whose parents were friends of the Luffs. “Mr. Luff was eccentric; he was always giving my dad stock tips but we didn’t have any money to invest. They had nude magazines in the bathroom, so all of the kids asked to use their bathroom.”

As a history-keeper, she prefers the bungalow to remain at its current location. The owner was approached by companies wanting to rent it, but each time the owner turned down the would-be tenant, she said.

Meanwhile, the Archstone project hasn’t completed its construction drawings while it presumably waits for a court ruling on how it can proceed. Archstone representatives could not be reached for comment.

In October 2012, a Palm Beach County Circuit judge ruled that voters could have a referendum on the Archstone approval. The city appealed that decision, and all are now waiting for the 4th District Court of Appeal to issue its opinion.

Archstone came back in spring 2013 with a modified plan that won City Council approval. Three residents sued on that decision, too, but dropped the lawsuit after the city pointed out they would be liable for Boca Raton’s attorney fees if they lost the case.

Archstone is part of Equity Residential, a public company based in Chicago. The parent company is focused on acquiring, developing and maintaining upscale apartments in growth areas, such as South Florida, Seattle, New York and Boston, according to its website.