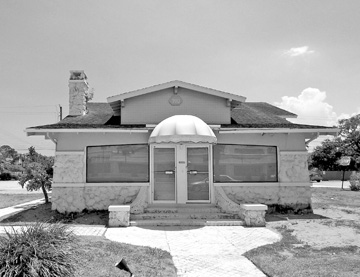 The owner of the historic Luff House wants the building either
moved or demolished. Courtesy of the Boca Raton Historical Society

The search for a new site for the circa-1920s Luff House is growing more desperate.

Mary Csar, executive director of the Boca Raton Historical Society, made a plea to save the home at 390 E. Palmetto Park Road at a special workshop on the Wildflower property just down the street.

The Florida-style bungalow, which the current owner wants moved or demolished, “used to be fairly common in this area. There are none left. I think this is probably the only one,” Csar said.

She hoped the two-story house could be incorporated into whatever development happens at the Wildflower site. The society has spent the past year looking for someone to help in the rescue.

“It’s a sturdy little house,” Csar said. “It could be utilized in a profitable way, and it could also preserve part of Boca’s history.”