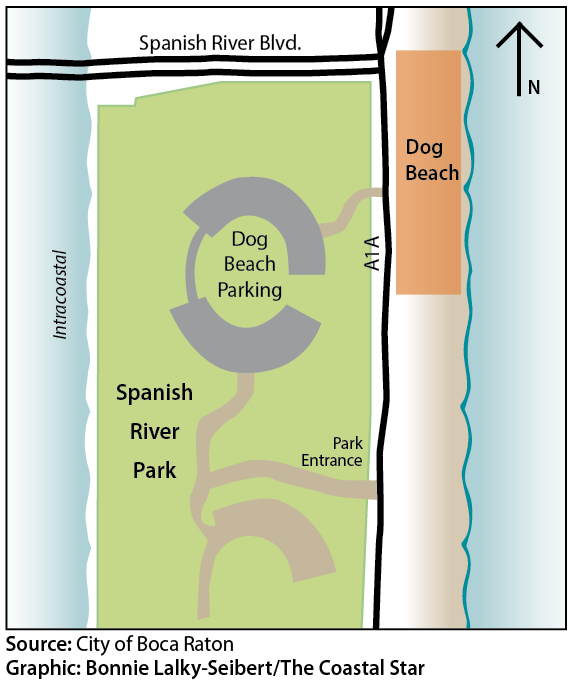 The city’s long-awaited dog beach will open to pets and pet lovers the second weekend of December at the north end of Spanish River Park.

Hours will be 7 to 9 a.m. and 3 p.m. to sunset on Fridays, Saturdays and Sundays. The afternoon period will be 5 p.m. to sunset when daylight saving time resumes.

Dog owners will need an annual permit or weekend pass to use the 300-yard-long dog-friendly area. Permits are $30 for Boca Raton residents and an undetermined amount for nonresidents.

A three-day pass is $10 and can be purchased at the Spanish River Park gatehouse.

“It’s a pilot program. If it doesn’t work out, we can certainly terminate it,” said Deputy Mayor Susan Haynie, who proposed launching the dog beach as a pilot program in September.

South Beach Park is convenient to parking and nearby homes but is also the most visited park of the three, with more than 420,000 beach-goers a year, the team decided. Putting a dog beach there would more likely result in “unwelcome encounters” between dogs and people, Gomez reported.

Red Reef Park has only 200,000 visitors a year but is the narrowest beach in the city and has the heaviest concentration of sea turtle nests, the team said.

Spanish River Park, which draws about 225,000 beach-goers a year, has parking lots as well as metered spaces on nearby Spanish River Boulevard. Gomez said he was trying to find a way to reimburse people who park at the meters out of the $10 weekend pass fee.

Gomez recommended that nonresidents pay $60 for an annual permit, but Boca Raton City Council members feared that would leave the dog beach overrun with out-of-towners.

“Delray’s just turned down their beach doggy park and they’re just waiting for us to open so they can all come down here,” Mayor Susan Whelchel said. “And we’ve just made it real convenient by being on our most northern beach.”

Gomez will recommend a higher fee for nonresidents at the Dec. 10 council meeting.

A park ranger will supervise the dog beach to ensure that patrons follow the rules and have a permit or pass. Three lifeguard stations also will monitor the area, which opens Dec. 13.

Boca Raton modeled its pilot project after Fort Lauderdale’s successful Canine Beach, which is 100 yards wide at State Road A1A and Sunrise Boulevard. Dogs can be taken to the beach for four hours on Friday, Saturday and Sunday evenings. Fort Lauderdale also allows dog owners with a permit to walk their pets on the sidewalk west of A1A in the early mornings.

Gomez said Fort Lauderdale sells 220 permits each year to residents and 30 to nonresidents.

Until now dog owners in Boca Raton had only Mizner Bark, the city’s popular but landlocked park for dogs west of Interstate 95. Mizner Bark is free for residents of the city and the Greater Boca Raton Beach and Park District; nonresidents pay $265 a year for a permit.

• Dogs shall be on a leash prior to entering, and upon departing, the Dog Beach.

• A person with a dog must be in possession of a device to properly dispose of any fecal matter deposited by their dog.

• The permit holder must carry permit on person at all times when bringing a dog to the beach.

• Dogs are only permitted between Towers 18 and 20.

• Dogs shall not dig in the sand.

• Dogs shall not create a nuisance by causing any form of disturbance such as excessive barking and/or similar undesirable conduct.

• Dogs in heat are discouraged from using the Dog Beach.