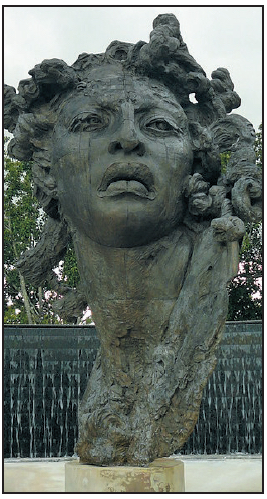 Boca Raton Museum of Art Executive Director Irvin Lippman has offered to lend the city four significant sculptures to adorn the new Wildflower and Silver Palm parks.
The City Council could have graciously accepted the gift and thanked Lippman for his civic spirit.
Instead, council members morphed into art critics, even though several conceded they know little about art.
Critiques of the offered artworks spanned the Oct. 26 and Nov. 10 council meetings. No decision was made on whether to accept the loan offer.
“I am not sure any of us know what we are looking for,” Deputy Mayor Andrea O’Rourke said on Nov. 10.
Mayor Scott Singer said he wants art with a “placemaking sense” that says “you are in Boca Raton.”
Council member Monica Mayotte is hoping for “something Instagramable” with a South Florida look and feel.
The options Lippman presented “don’t really yell out at me South Florida waterfront or park,” said council member Andy Thomson.
In her maiden voyage as a City Council member, newly appointed Yvette Drucker agreed the art should “signify Boca Raton. … I think we could do something a little better to welcome people.”
“We need to think of selfie moments,” O’Rourke said.
Lippman offered to lend four sculptures now at the museum’s art school for three to five years. The time could be extended, or the council could choose new works when the loan term ends.
“The museum is happy to go beyond our walls,” he said.
Installation would cost $10,000 and annual sculpture maintenance would also cost $10,000, city officials said.
Council members were generally OK with three of the sculptures Lippman presented Oct. 26, but did not like a bronze by Javier Marin titled “Hoy es Hoy” that Lippman proposed for the entrance to Silver Palm Park.
“It almost is like the bust of an actual person,” Singer said. “It is striking, but I will be honest, a little more austere. What message does it send?”
Lippman defended it as “dramatic” and a “significant work of art.”
But seeing that council members weren’t exactly thrilled, Lippman said he would offer additional choices Nov. 10.
Council members didn’t greet those with rapture either.
Yet they repeatedly thanked Lippman for his generous offer.
“I couldn’t be more grateful,” O’Rourke said.
Even so, she asked if the city has enough money to buy a sculpture for Silver Palm Park.
Council members quickly agreed with City Manager Leif Ahnell’s suggestion that the city seek options from EDSA, the consultant that has designed the adjoining parks on the Intracoastal Waterway at Palmetto Park Road.
Asked after the meeting what city officials had asked him to do, EDSA principal Kona Gray said he will see if the museum has other sculptures it can donate. He also can identify artists that EDSA or the city could approach for a sculpture.
When art is loaned, it must fit the spirit of the park, Gray said. “It can’t be any piece of art.”