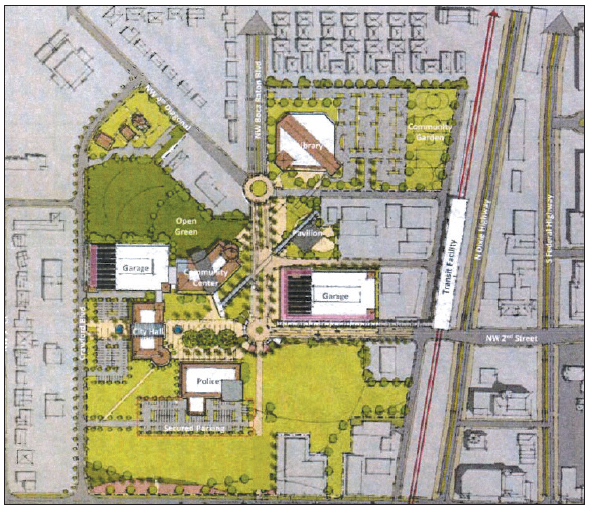 Plans for a new downtown government campus will be scaled back now that City Council members have balked at a consultant’s proposal that would cost at least $200 million.

Song + Associates unveiled two options in December for a new campus that would replace the current city hall, police department and community center. The consultant had not calculated the cost at that time.

Now the number is in, and council members are stunned.

“Our eyes were bigger than our stomachs. … The price tag gave me sticker shock,” council member Andy Thomson said at a May 28 workshop meeting.

“We probably took on more than we can chew…,” said council member Andrea O’Rourke. “$200 million is a very big number.”

“We need to figure how to cut it back to make it more palatable,” said council member Monica Mayotte.

Council members still see a need to replace buildings on the 30-acre, city-owned site that are old, outdated and far too small for the growing city. But they directed the consultant to pull back the reins and divide the project into phases.

Song + Associates has tweaked its proposal since December but not made major changes. Space in the new city hall, police department and community center would be about double what now exists, and two 600-space parking garages and a small retail or multipurpose building would be added to the site.

The Downtown Library and Boca Raton Children’s Museum would remain unchanged at their current locations.

City Hall, located on West Palmetto Park Road, would be moved to the western edge of the site and would face east, fronted by a public plaza. Green space would be preserved, giving the city the ability to expand again in the future.

The consultant’s proposal was based on what residents, who were surveyed in 2017, wanted included and excluded in the campus. For example, a majority wanted existing ballfields and a tennis center moved out of the site.

In all, the consultant’s proposal would cost $196.8 million, not including road changes that could cost another $20 million.

Council members first showed their discomfort in April when City Manager Leif Ahnell told them about the projected cost during their annual two-day retreat to discuss goals for the coming year. They agreed to discuss the matter further at the workshop meeting.

But much remains unresolved, including which buildings would be constructed first. Also undecided is whether two garages are needed, proposed road reconfigurations should be done and ballfields, playground and tennis center added to the campus. Ú