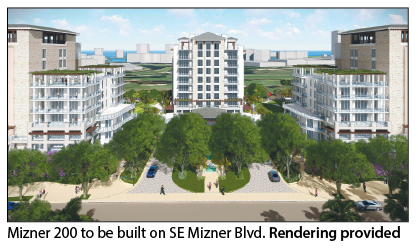 Three days after the Boca Raton City Council pressed both sides to reach a compromise in the contentious battle over the proposed Mizner 200 luxury condo, the combatants met at architect Derek Vander Ploeg’s office in late July to strike a deal.
The deadline was tight.
Developer Elad National Properties wanted the City Council to consider the project again on Aug. 21 and approve it. Elad and project opponents had only a short time to try to find common ground so plans could be revised and submitted to the city.
Residents of Townsend Place condo, the nearest neighbor to Mizner 200, wanted changes that would lessen the project’s impact on their eastward views and property values. Major landowner Investments Limited, which is redeveloping its nearby Royal Palm Place shopping and dining destination, also wanted its views protected and joined in condemnation of the project’s massive size.
But the long acrimony quickly gave way to a meeting of minds. Vander Ploeg, whose role in the talks was to “maintain balance and suggest solutions,” said the outline of a deal was struck in about five hours.
“They came up with what I think is a much better building,” he said.
“We became pretty friendly, actually,” George Garcia, chief executive of the project architectural firm GarciaStromberg/GS4Studios, told City Council members, sitting as Community Redevelopment Agency commissioners, at their Aug. 21 meeting.
But the pace of the work was grueling.
“We have been [working] literally nonstop,” Garcia said.
After three years of passionate argument, controversy, a few conspiracy theories and laments about downtown overdevelopment, Mizner 200 sailed to unanimous City Council approval.
As the audience clapped and cheered, Elad chief executive Amnon Safran fist-bumped each of the five commissioners.
All parties hailed the final product, and ominous drumbeats of potential litigation faded away.
“We re-engaged and we got a great result,” said Elad attorney Bonnie Miskel.
“What you see before you is a greatly improved and enhanced project” that is “beautiful, sensitively designed,” said Doug Mummaw, an architect for Investments Limited.
John Gore, president of BocaBeautiful.org, which has staunchly opposed Mizner 200, praised Elad’s “new cooperative spirit,” on the BocaWatch website before the meeting.
“We can enthusiastically endorse the process that produced this result,” he wrote, adding that it “should be the new paradigm for development in Boca.”
Council members praised Elad, GarciaStromberg and project opponents for collaborating.
“I think the outcome is better for a lot of people and there is reason for celebration,” said council member Scott Singer.
“I think it is a win, win, win for everybody,” said council member Andrea O’Rourke.
In the final push to overcome lingering objections, Elad and its architects agreed to sign off on technical conditions they already had agreed to.
While a city consultant had approved the redesign, it had not been considered by the Community Appearance Board. The board will do so, but it can’t undo the council’s vote.
Elad’s 384-unit Mizner 200 will replace 246 Mizner on the Green townhouses on nearly 9 acres along Southeast Mizner Boulevard.
The developer stunned downtown residents in 2014 when it unveiled plans for 500 luxury condos in four towers rising as high as 30 stories designed by prominent “starchitect” Daniel Libeskind.
The concept was a nonstarter because the towers well exceeded downtown height limits. Since then, the project has been redesigned five times and now meets all the city’s requirements.
Along the way, GarciaStromberg divided Mizner 200 into three sections to allow views eastward to a golf course and the ocean. The buildings were pushed back from Mizner Boulevard to make room for a landscaped pedestrian promenade. Heights of various sections of the building were varied and accommodations made to limit the building’s impact on the Townsend Place condos.
In the most recent redo, the architect increased the distance between the project’s three buildings to make it look less massive, and lowered the height of a portion of the buildings lining the entranceway.
The height of a section of the south end of the project was lowered so Townsend Place views are less obstructed. The setback from Townsend Place was increased and the land between the two projects was landscaped more lushly.
The entranceway was redesigned to include a public plaza and more water features, and the pedestrian promenade was widened and has lusher landscaping and oak trees to provide shade.
“Please give the approval today,” Safran implored council members. After a brief recess and last-minute dealmaking, he got his wish.