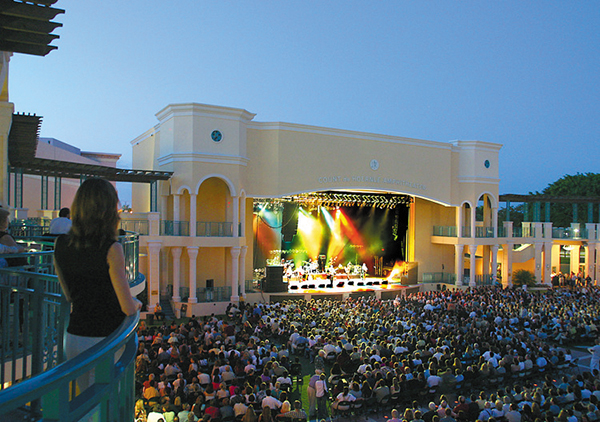 The Related Group would demolish Mizner Park Amphitheater and replace it with 400 residential units. Photo provided

A major developer has approached city officials about creating a public/private partnership to develop city-owned land just as they are in the early stages of deciding how to build a new municipal campus downtown.
The Related Group, South Florida’s largest luxury condo developer also known for its large mixed-use projects, contacted the city about a year ago, but no formal talks took place. Now Related is back, proposing in a July 11 letter a swap agreement.
Related is offering to build a 1,500-seat indoor performing arts center and adjacent parking garage within the nearly 30 city-owned acres around City Hall. In return, the city would give Related about 3.6 city-owned acres in the northeast section of Mizner Park, where the developer would tear down the aging outdoor amphitheater and build as many as 400 residential units, retail space and a parking garage the public also could use.
“Overall, this would be a huge benefit for the city in many respects,” said Glenn Gromann, who recently did not seek reappointment to the city’s Planning and Zoning Board. He said he made that decision to avoid conflicts of interest when he became an independent consultant with Related.
The proposal would solve several of the city’s problems, he said.
It would give the city a performing arts center it has long wanted. With Related managing the construction, it would be built more quickly and at less cost, he said.
The plan would eliminate the outdoor amphitheater Gromann described as old, uncomfortable and open to the elements and mosquitoes.
It also would give the city badly needed downtown public parking spaces, he said. A consultant recently outlined the need for 108 more public parking spaces now and more in the future, and city officials have been wrestling with where to build a downtown parking garage and how to pay for it.
Gromann said the city could feel certain that Related would build first-class residential units. The company is headed by Jorge Perez, who launched the Perez Art Museum Miami, and “only builds the highest quality projects,” Gromann said.
A spokesman for Related said the company had no comment on its offer.
The Boca Raton City Council on July 25 gave staff permission to speak with Related.
“Please do so,” said council member Scott Singer.
“Go for it,” said council member Robert Weinroth.
After the meeting, Mayor Susan Haynie said it is too early to reach any agreement with Related.
“Until we get further along in the municipal campus planning process, it is premature to think we are going to move the amphitheater or get rid of the amphitheater in Mizner Park,” she said.
Related representatives since met with city officials. It was decided that any discussion should wait until after consultant Song & Associates presents to the City Council its findings on what residents want included in the downtown campus, said a city spokeswoman. That was scheduled to take place on Aug. 21, but was delayed.
The consultant held a meeting on June 21 to get the public’s input.
Of the 74 city residents who attended, 65 percent wanted a performing arts center in the campus, and 53 percent said the Mizner Park amphitheater should be replaced by an amphitheater in the campus, according to the consultant’s report.
Ninety-three percent said they would like a parking garage in the campus, while 96 percent said they want a park-and-ride service from the campus to downtown and the beach.
A large outdoor gathering space and a new community center drew majority support, but most wanted existing baseball fields and a tennis center moved out of the area. A strong majority also wants City Hall and police headquarters to remain part of the downtown campus.
Perhaps surprisingly, Al Zucaro, the publisher of BocaWatch, supports the idea of the city’s talking with Related. BocaWatch has campaigned aggressively against overdevelopment in the downtown, while Related is proposing more development.
Zucaro, who said he has no direct relationship with Related, sees no contradiction.
“My advocacy for at least entertaining the conversation is to find out what they are willing to do and what they are asking for in terms of doing it,” he said. He has not prejudged what the outcome of those talks should be, Zucaro said.
Zucaro said his knowledge of Related dates to when he served on the West Palm Beach City Commission at the time it was analyzing proposals for what became CityPlace, whose developers include New York-based Related Cos. and Miami-based The Related Group.
“I have a high degree of respect for Related and Jorge Perez from my experience in West Palm Beach,” he said. “They are a very reputable company with the capacity to do whatever they say they will do. I see no utility in not engaging in that discussion.”
The Related officials sending the letter included Senior Vice President William Shewalter. Before joining Related, Shewalter was senior executive officer with Elad National Properties, which proposed the Mizner 200 luxury condo project on Southeast Mizner Boulevard that won city approval in August for construction.
Related’s most recent proposal is more limited than its previous offer to create a master plan for the downtown campus. But Gromann said Related is open to a larger role if city officials want that.

Currently, workers erect a temporary tent at Mizner Park amphitheater to protect the crowd from the elements during most performances. Photo provided