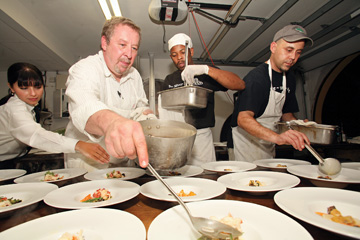 Chef Robbin Haas spoons lobster into bowls. His assistants, Michael Boothe and Alexandre Camilus from Silver Sac Catering of Boca Raton, follow along with sauce and vegetables in assembly-line fashion. They work in a 3-bay garage at the Boca Raton home of Robert Campbell.

After the guests leave their cars with the parking valets, they meander past the blue Bentley, silver Rolls-Royce and shiny red MG parked in the driveway of Robert Campbell’s home in Boca Raton.

Campbell is hosting one of six Vintner Dinners at his palatial residence in the Sun & Surf community. The dinner is part of the annual Boca Bacchanal weekend (this year it ran from March 18 to 20) for the benefit of the Historic Preservation and Heritage Education programs of the Boca Raton Historical Society.

Campbell is the only person to have sponsored a dinner for each of the event’s nine years. 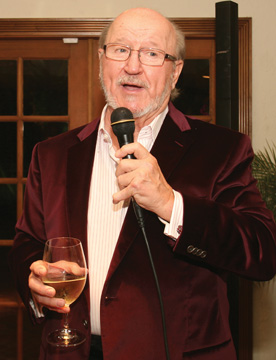 Many attendees return to Campbell’s home year after year because, “They know they’ll get an unusual dinner and be nicely entertained,” says Campbell, who is chairman and founder of BBC International that designs and sources children’s and athletic shoes.

Although the Bacchanal weekend also features guest chefs preparing Saturday dinner at the Boca Raton Resort and Club and a tasting of local restaurants at Mizner Park on Sunday, it is these Friday Vintner Dinners that have become the hot ticket.

For each of the six dinners hosted in a private home, a celebrity chef is paired with a winemaker. The chef creates a six-course menu to complement the wines. The evening of the event, the chefs finish and present their unforgettable fare to a small group of people at each host’s home. Attendees pay $300 each to take part.

Tonight the team at the Campbell home includes chef Robbin Haas and Blair Fox of Fess Parker Vineyards in Santa Barbara, Calif. This year’s Bacchanal features members of the Mango Gang, the group of young chefs including Haas, who put South Florida on the culinary map in the 1980s.

For the chefs involved in the Vintner Dinners, the work begins when they team up with the wineries. Haas asked for copious tasting notes from Fox so that he could plan his menu. By studying the wines, he knew to make his entrée — seared, dry-aged sirloin steak with truffled sunchoke gratin and glazed mushrooms — pair nicely with the Rodney’s Vineyard Syrah 2007.

“The dishes have to match the wines. This isn’t the time for me to show how creative I can be,” Haas says.

More planning follows as the participating chefs create their shopping lists. Ten days before the event, these are sent to the chefs at the Boca Raton Resort and Club. The club’s chefs do the ordering so the food is in-house when needed.

Getting exactly what the chefs order isn’t always easy for the resort’s executive sous chef Donald Young. For example, Mark Militello, a consulting chef from Pompano Beach and a founding member of the Mango Gang, wanted Laughing Bird shrimp. It’s farm-raised in Belize without chemicals so it’s very sweet. But the fish farm was closed for the season. Others had to be substituted.

By Wednesday, Campbell is having the pool and ping pong tables removed from his game room and put in storage. He needs to make room for the seven large round dining tables that will fill the area.

He also has arranged for a caterer to help serve the meal, flowers, a singer and a rental company to provide tableware and cooking equipment. Because the host of each of the Vintner Dinners sponsors the party at his or her home, all proceeds go to charity. And, of course, the chefs donate their time and skills.

The work really begins around 5 p.m. on Friday when Haas, wearing his signature red Crocs, arrives at the Campbell home. The caterers are already here setting the tables with two layers of cloths, arranging silverware and polishing Riedel glassware for all the fine wines to be poured this night.

Setting up the kitchen

Now Haas sees his “kitchen” for the first time. It will be his home for the next seven hours.

Three bays of the five-car garage have been turned into a catering area. There’s a six-burner propane stove, convection oven and five 8-foot work tables brought in by Atlas Party and Event Rental of Boca Raton. The garage doors are open to provide air and light.

There is chef Justin Butera who he’s been working with him over the past two days at the Boca Raton Resort and Club where they did the brunt of the cooking and food preparation. Michael Boothe and Alexandre Camilus from Silver Sac Catering of Boca Raton are here helping out.

Haas walks his staff through each course explaining what plate to use — square, rectangular or dimple — how food will be set on the white plate and what garnishes to add.

The chef is careful to let everyone sample any unfamiliar ingredients such as the rare white honey he has brought from Guatemala; the dulce buttons, tiny white flowers that taste 500 times sweeter than sugar; yuzu juice from a South Asian citrus fruit; and Beemster, a crumbly yellow cheese that’s aged 26 months and tastes like caramelized milk with a tang.

Then the chefs take inventory to see what is ready and what needs to be chopped, minced, grated or mixed. Their work develops a rhythm and soon it is time to start assembling the hors d’oeuvres for the catering staff to pass around to guests.

Haas picks some palm fronds and purple bougainvillea from the garden to decorate the wooden serving plates.

Meanwhile, the catering staff that has finished transforming the game room into a dining room changes into stiff white shirts, black pants, butcher aprons and ties.

Before they begin service, Haas offers a short pep talk. “Keep the service expedited. I want us out of here early,” he says. There’s appreciative laughter.

The wait staff picks up the hors d’oeuvres platters and the party begins.

The kitchen staff immediately sets to work browning $700 worth of scallops, slicing them and fanning them onto 60 square plates. Working like an assembly line, they add a bit of apple and Asian pear slaw flavored with yuzu vinaigrette.

Then Karin Larson, owner of Silver Sac Caterers, steps up to wipe the rim of each plate before her wait staff whisks them to the now seated guests.

The waiters work in teams of four, each carrying two plates, so that when they arrived at the table, everyone around it is served at the same time. They work with military precision.

A little wave of tension runs through the “kitchen” when a waiter returns with the news that three diners are vegetarians and two are allergic to shellfish. The chefs have to improvise a new dish.

At a restaurant, this would not be a problem. But here, they don’t have many ingredients or much equipment available to create something on the spot.

Haas saves the day with a potato salad made from garnishes and ingredients he brought to use on other dishes.

The staff works through the evening with each course taking shape on the plates and then being offered to the guests. The only signal that the party is going well is that plates return to the kitchen empty.

By about 11 p.m., the cheese/dessert course is on its way and the staff can take a much deserved break. Haas steps outside under a full moon to enjoy a Marlboro and a glass of vodka on ice. The wait staff is treated to a taste of the wines poured throughout the evening.

Haas joins them to offer an impromptu wine tasting lesson showing them how the Rodney’s Vineyard Syrah 2007 leaves legs in the glass.

As the guests say goodnight to their host and retrieve their cars from the valets, the catering staff finishes packing up and then takes time to have Haas autograph copies of
the evening’s menu.              Ú