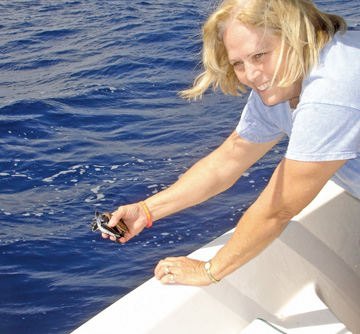 Sea turtle hatchlings displaced by Hurricane Irene in late August were transported out to sea by volunteers and staff of Gumbo Limbo Nature Center in Boca Raton on Oct. 20. Gumbo Limbo Volunteer Coordinator Debbie Wilson (above) says goodbye to the baby turtles as she gently drops them into the water. The green sea turtle and loggerhead sea turtle hatchlings were transferred to a cooler (below) for the boat ride, then deposited into patches of sargassum—floating seaweed ‘salad bars’ — about three miles offshore. In the days after Hurricane Irene, coastal residents rescued more than 300 disoriented and exhausted sea turtle hatchlings and took them to Gumbo Limbo. Despite the storm’s effects, an estimated record-high of 20,000 sea turtle nests were counted on Palm Beach County’s coastline during the 2011 nesting season, which ended Oct. 31.  Photos by Paula Detwiller