Dr. Maria Chadam checks the eyes of one of the 12 Kemp’s ridley turtles that were flown from Cape Cod for treatment at Gumbo Limbo. Andrea Jelaska, a sea turtle rehab technician, holds the turtle.

Dr. Maria Chadam peered into the eyes of a struggling Kemp’s ridley turtle, checking with her penlight to see how much damage the little reptile had suffered in its struggle to come ashore.
An assistant held the young turtle with both hands, like a sandwich, so the veterinarian could check for ulcerated sores, breaks in its carapace, and signs of dehydration.
The exam was one of the last and most crucial steps in an extraordinary turtle rescue effort that began on the beaches of Cape Cod, Massachusetts, and ended — at least for now — at the Gumbo Limbo Nature Center in Boca Raton.
The rescue took place on a Sunday night just before Christmas. Twelve young Kemp’s ridleys, the world’s smallest, rarest and most endangered sea turtles, were flown by private plane from the New England Aquarium to Pompano Beach Airpark.
The flight was arranged by Turtles Fly Too, a volunteer organization of more than 450 pilots who donate their time and aircraft to rescue missions around the world, said founder Leslie Weinstein.
Members of the rescue team from Gumbo Limbo then transported the turtles by van to the nature center, carrying them inside the facility in cardboard banana boxes supplied by the aquarium.
“Most of them have pneumonia and are very sick,” Chadam said. “We might lose a few of them.”
The Kemp’s ridleys — named for Richard M. Kemp, a fisherman and naturalist from Key West — were among more than 500 turtles stranded in Cape Cod Bay in November, said Sarah Perez, a senior biologist with the New England Aquarium.
The turtles, which are born in and around the Gulf of Mexico, migrate north as they follow the Gulf Stream, Perez said. They like to forage for food in the warm, summertime waters of Cape Cod Bay.
But as winter sets in and water temperatures quickly drop below 60 degrees, the turtles try to swim south but are unable to navigate around a hooked land mass barrier known as the “arm” of Cape Cod.
They become “cold stunned” and unable to swim, Perez said. By the time they wash up on the beaches they are often ill and very weak. In that state they are often hit by boats or attacked by predators.
The stunned turtles are collected from the beaches by volunteers from Massachusetts Audubon’s Wellfleet Bay Wildlife Sanctuary. Many of the animals are transported to the New England Aquarium in Quincy, Massachusetts, where they are cataloged, warmed and, often, treated for pneumonia.
“We transport many of them to secondary facilities because we just can’t take care of them all,” Perez said. “We tend to send them to the same facilities every year.”
Gumbo Limbo, with its survival rate of 80%, is one of those trusted facilities.
Although she could not say definitively that climate change is responsible for the increasing number of stranded turtles, Perez did say that Cape Cod Bay and the Gulf of Maine are among the fastest-warming bodies of water in the world. They attract turtles that have trouble adapting when the water turns cold.
“This year we had 509 [cold] turtles. It was the third-largest intake we’ve ever had,” Perez said.
At Gumbo Limbo on the night of the rescue, the turtles were measured and weighed, given intravenous fluids and antibiotics, X-rayed and treated for wounds.
Over the next few months the turtles will be given more antibiotics, fluids and vitamins and rehabilitated in tanks with water temperatures at about 73-75 degrees.
They probably would not eat for several days or even weeks, Chadam said. “Their systems have completely shut down from the cold.”
At the end of the long intake process — facilitated by Gumbo Limbo’s specially trained rescue crew — the turtles seemed to spring back to life when placed in the water.
Chadam warned, however, that although they were swimming energetically by the end of the evening, not all would survive.
“Sometimes we lose the liveliest ones. When we do necropsies we find their lungs are just black,” she said.
By New Year’s Eve, three of the 12 rescued turtles had died from injuries, illnesses and exhaustion from their long journey. The other nine, however, were swimming in their tanks and were eating well, according to Shelby Hoover, a member of the Gumbo Limbo rescue team who was monitoring the young turtles over the holidays.
Hoover said the turtles have had hundreds of visitors since their arrival just before Christmas. Among the visitors were Jim Rose — the Turtles Fly Too pilot who volunteered to fly the turtles South in his Piper aircraft ­ — and his family.
The turtles will continue to receive antibiotics for pneumonia and other diseases, intramuschular injections of fluids, and small, gourmet meals of shrimp, squid and fish.
During the coldest days of Christmas week, the turtle tanks were draped in tarps and some of the reptiles were brought inside, Hoover said.
Whitney Crowder, the nature center’s sea turtle rehabilitation coordinator, said once the turtles are nursed back to health at Gumbo Limbo, they will be released in waters near Volusia County. 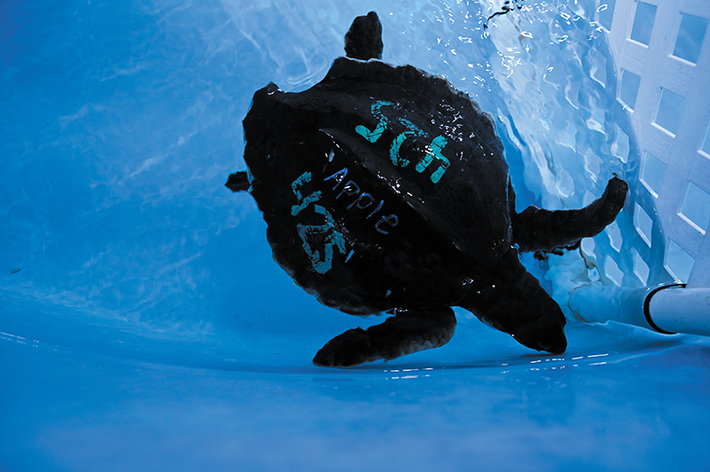 The turtles were given ID numbers and names; Apple Strudel had part of its shell bitten off by a fish but was doing well at year’s end.
Photos by Jerry Lower/The Coastal Star

A history of care
Gumbo Limbo’s turtle conservation efforts began in the 1970s when Gordon Gilbert, the nature center’s founder, conducted nighttime turtle walks to teach local students the importance of preserving marine life, Crowder said.
“Even back then, the city of Boca Raton understood the importance of sea turtle conservation, and a plan was formed to try to preserve Boca’s 5 miles of beach and 20 acres of Intracoastal hammock,” Crowder said. “Through the ’70s, ’80s and ’90s, the sea turtle program at Gumbo Limbo would slowly continue to grow and improve.”
In 2010 the turtle rehabilitation facility was opened and shortly thereafter a cold snap hit Florida, which stranded nearly 5,000 endangered sea turtles. More than 175 were treated and released by Gumbo Limbo.
“Our facility was originally constructed to admit roughly 30 sea turtle patients annually with seven treatment tanks,” Crowder said. “Currently, we have 12 rehabilitation tanks and we treat over 100 juvenile-to-adult sea turtles and 100 to 1,000 or more hatchlings and post-hatchlings annually.”
Many of them are Kemp’s ridley turtles, which have a parrot-like beak, grow to be about 100 pounds and live 30 years or more. They reach maturity at about 13 years, Crowder said, adding that the latest rescues are only a few years old.
They are members of the genus Lepidochelys, which also includes the olive ridley sea turtle.
The rescued Kemp’s ridleys can be seen each day at Gumbo Limbo from 9 a.m. to 4 p.m. except Mondays, when the center opens at noon.