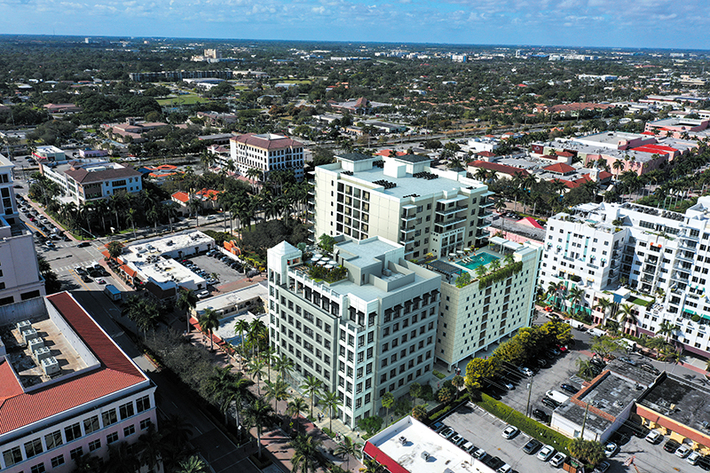 The trio of buildings would be located at 121 E. Palmetto Park Road, a block east of Federal Highway. Rendering provided

Compson Associates is planning a large residential, office and retail project in downtown Boca Raton that is already sparking strong objections even though it is in the early stages of the city’s review process.
The proposed Aletto Square would include three buildings on 1.3 acres at 121 E. Palmetto Park Road, northeast of the Hyatt Place hotel and southeast of Sanborn Square.
A 93-unit luxury apartment tower would rise to 12 stories, the maximum allowed in the downtown. A seven-story office and retail building would feature a restaurant with rooftop dining. An eight-story fully automated parking garage, the first of its kind downtown, would provide 360 parking spaces and a rooftop pool.
A courtyard would be located between the office and apartment buildings, and two smaller courtyards would flank the east and west sides of the office building.
Boca Raton-based Compson also developed the 12-story Tower 155 luxury condominium at 155 E. Boca Raton Road that the City Council approved in 2016.
Project architect Derek Vander Ploeg, who also designed Tower 155, said plans for Aletto Square were informed by what he learned during planning for the condo.
“There is a need for larger luxury (units) rather than average rental units in the area,” he said. That was also true for the condo. To accommodate people wanting more living space, he reduced the number of Tower 155 units from 170 to 128.
Class A office space is also needed, he said, since no new Class A buildings have been constructed in about two decades.
City Council members said in November that they want more Class A space to help lure blue-ribbon companies to Boca Raton. They plan to solicit ideas on how best to accomplish this.
Aletto Square would be the first large-scale downtown project proposed since Camino Square — with two apartment buildings, two parking garages and two retail buildings at 171 W. Camino Real — was approved by the City Council in 2019.
Large projects have stirred residents’ passions for more than a decade as they transformed the downtown, prompting cries of overdevelopment that was ruining the city’s character.
Camino Square, Tower 155 and Alina Residences, which opened in 2021 on Southeast Mizner Boulevard, were criticized as too large and certain to worsen traffic conditions.
So it is hardly surprising that residents are gathering signatures on a petition imploring the City Council to deny approval for Aletto Square. As of Dec. 15, 284 people had signed.
The petition says that small shops would give way to the project, stripping the area of its welcoming feel.
It says the first sight for visitors would be “just another series of tall concrete buildings.”
“Combined with Tower 155, another large building on a very small footprint just down the road, Aletto Square would make a concrete jungle out of an idyllic touch of urban living.”
The petition also laments the negative impact on “peaceful and bucolic” Sanborn Square, saying its atmosphere would be harmed by a “concrete-heavy environment.”
Vander Ploeg dismissed the complaints, saying they have “no substance.”
The project is not yet scheduled for review by the Planning & Zoning Board, but the Community Appearance Board gave it a preliminary review Nov. 16.
The CAB’s purview is limited; it assesses the aesthetics of a project. Board members liked the appearance of the buildings and central courtyard.
Two suggested improvements to the landscaping, with one member saying it was “a little underwhelming” and another saying he would like the addition of more shade trees.