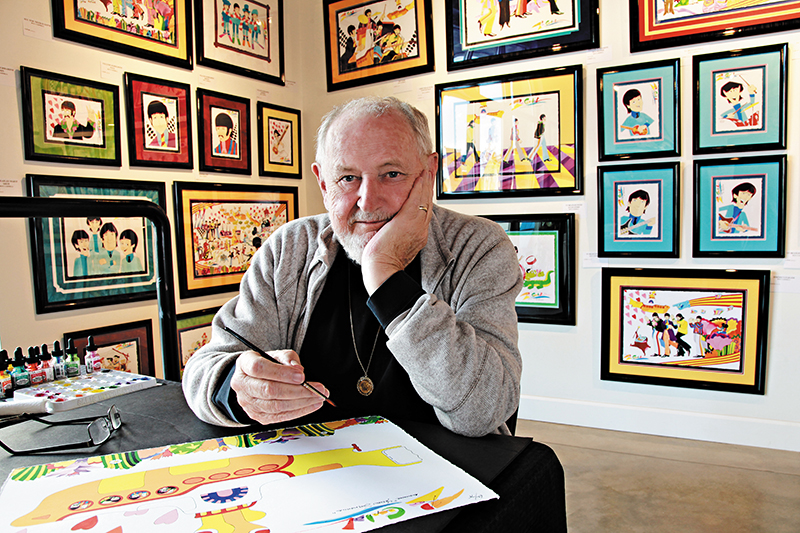 Ron Campbell painted the yellow submarine for the Beatles’ animated film of the same name. He contributed about 12 minutes of the finished product. Photo provided

When the second annual International Beatles on the Beach Festival hits Delray Beach on March 26-29, you’ll hear from more than a dozen Beatle imitators — and one Beatles illustrator.

You’ll hear The Bertils from Sweden, The NoWhere Boys from Colombia, Beat and Shout from Brazil and Estefy Lennon, a female John Lennon tribute band from Argentina.

You’ll hear “McCartney Mania,” with a full orchestra, and even a performance by Micky Dolenz, former drummer for those “prefab four,” The Monkees.

Also promised is a display of artwork by the some of the Beatles at the Cornell Art Museum in Old School Square, where you'll have a chance to meet and hear Ron Campbell, but he won't be singing Yellow Submarine.

He helped draw it.

Campbell was 28 and already a veteran cartoonist when he drew sketches used to animate many scenes in the beloved feature cartoon, Yellow Submarine.

It was Campbell who helped bring the Sea of Time sequence to the screen, the Chief Blue Meanie and his sidekick Max, and of course, “Jeremy Hillary Boob Ph.D.,” the Nowhere Man.

Before that, he’d animated the hit Beatles TV cartoons back home in his native Australia, and afterward he’d go on to work on Scooby-Doo and The Smurfs, the Flintstones, Jetsons and Rugrats.

Beloved characters all, but when Campbell appears at cartoon festivals, sharing his memories and selling his artwork, the cartoon characters who draw the biggest crowds are the ones based on four real human beings.

“I’d say it’s 50% Beatles,” Campbell says. “With the Beatles, you not only get the attraction of cartoons, you also have the love of the music.”

A graduate of the Swinburne Art Institute in Melbourne, Campbell was already established, animating Beetle Bailey and Krazy Kat cartoons when his director, Al Brodax, called in the middle of the night. He’d just sold a new show. Would Ron like to direct it?

“What show?”
“The Beatles.”
“Al,” Campbell told him, “insects make terrible characters for a children’s show.”

“I was a serious young man listening to classical music,” Campbell says, speaking from his home in Arizona. “This was hundreds of little girls drowning out the music, so I hadn’t taken a second’s notice of it. But I quickly learned.”

The Beatles cartoon TV series ran for four years at the height of Beatlemania, and in 1967 Brodax called again, asking Campbell to contribute to the upcoming feature film.

By then, he’d moved to California, worked for Hanna-Barbera’s Smurfs series and opened his own company, Ron Campbell Films.
He helped complete about 12 minutes of the finished Yellow Submarine film, work that took about eight months.

“I didn’t even mention it when I was giving my bios and stuff,” he says.

But the rock band he hadn’t paid attention to in 1964 didn’t go away, and the psychedelic cartoon he’d help draw still draws praise and fans.

“That’s because their rock ’n’ roll music is good,” he says. “It’s varied, it’s rich, it’s not monotonous, and every song is different, with magical phrasing in it.”

Campbell turned 80 in December. He’s retired now, traveling to Beatles shows about once a month. But while the Beatles and Yellow Submarine have endured, the art of hand-drawn animation that he mastered has faded as Pixar and Disney’s computer-generated imagery has taken its place.

“CGI belongs to the young people,” Campbell says, without bitterness. “It’s got nothing to do with me. CGI is cold, but with great story lines and beautiful design and very expressive production. Computers can do things no human being can hope to do. But hand-drawn work has a softness and pleasantness that computers can’t capture.”

By now, you’re no doubt asking what all who come to his exhibits ask. Ron Campbell drew John, Paul, George and Ringo, but no, he never met them. “I’m sorry,” he tells the fans, “but you can’t shake the hand that shook the hand.”

And surely his favorite Beatles song must be Yellow Submarine?

“Here Comes the Sun,” he says. “And I like Hey Jude. It reminds me of Ravel’s Bolero. But a favorite? That’s impossible.”

If You Go
What: Beatles on the Beach
When: March 26-29, with music events March 27-28
Where: Old School Square and Cornell Art Museum, Delray Beach, and other venues around town
Admission: $29.50 a day for general admission, $89.50 for concert VIP or $152.50 for weekend VIP. VIP tickets cover entry to all events.
Info: www.beatlesonthebeach.com
Meet Ron Campbell: The artist will paint, talk to visitors and show his work at the Cornell Museum from 10 a.m. to 5 p.m. March 26-28 and 1 p.m. to 5 p.m. March 29. Admission is free.