Libraries aren’t just for books. They are wonderful showcases for contemporary art.
Highland Beach, Boca Raton, Delray Beach, Boynton Beach and Manalapan libraries all host art exhibits from local artists.
By opening their doors and bringing in art, these libraries get a creative draw to bring in new visitors.
“The very basic, basic purpose is to bring visitors to the library,” says Debby Coles-Dobay, public arts manager for the city of Boynton Beach. “We have a lot of visitors who come for our exhibits all the way from Jupiter and down to Miami.”
Underwater and other types of photography, fiber art, mixed media, collages, oils, acrylics, watercolors, pastel, pencil, charcoal, historical images and 3-D wall art have all been showcased at the Boynton Beach City Library.
To participate in the city’s Art in Public Places program, begun in 2009, artists must present their proposals for an exhibit and be approved by the Boynton Beach Arts Commission board.
Once approved, exhibitions are held on the second floor of the facility at 208 S. Seacrest Blvd.
“Every exhibit has a reception at the exhibit space,” says Coles-Dobay. “We have had [artist] presentations, demonstrations, interaction — some on a formal basis and others informal — where the visiting public can interact with the artists to learn more about their artwork.”
The library’s current exhibition (through Jan. 4) is Destinations in Art, featuring the artwork of the Delray Art League. The exhibition was judged by artist and teacher Jim Rigg, and his commentary was put on video and posted on Boynton Beach Art in Public Places social media.
During the artists reception, Deborah LaFogg Docherty created a pastel painting now on auction at the library.

“I want to deliver exciting exhibitions,” Coles-Dobay says.
***
In Delray Beach, library art exhibits and receptions are linked with the “First Friday” art walks downtown. Artist receptions are 3 to 4:30 p.m. at the library, 100 W. Atlantic Ave., on the First Friday whenever a new exhibition is on display.
As with the Boynton Beach City Library, the Delray Beach Public Library is showcasing the work of artists in the Delray Art League in Artful Expressions, which runs through Dec. 15.
The next exhibit is Provence and Beyond by retired U.S. Army Col. Al Biegel, a painter. A reception to meet Biegel, who spends several weeks painting in Europe each spring, is Jan. 5.
Art exhibits at the Delray Beach library run for two months, and Lee Simon, volunteer art coordinator since 2009, says exhibits are booked through 2018.
“Obviously, it built a reputation,” Simon says. “I don’t go looking for people; they come looking for me.”          For some artists, the Delray Beach Public Library is their very first public show.
“Sometimes, I’ll group new artists,” Simon says. “It’s a tremendous exposure. Because libraries get a lot of traffic. People love just walking in and looking at the various exhibits.”         Exhibitions are held on the library’s second floor.
“I have a lot of wall space, and I utilize the wall space to the fullest. I can hold 30 to 35 large pieces and [with] smaller pieces I can hold up to 60 pieces,” Simon says. “I do six shows and six meet-and-greets a year.”
***
A committee selects the art on display at the downtown Boca Raton Library, 400 NW Second Ave., and artists are chosen on artistic merit.
The library hosts a display of photography by Boca Raton high school students each May.
“The quality is always really great, and it’s by local high school students and I think it’s amazing,” says Oyuki Poletz, program services librarian at the Boca Raton Library.
The library has been hosting art exhibits since the building opened four years ago.     “It’s been a really good experience,” Poletz says. “It’s nice to see different artists.”
Artist exhibits are held in the lobby. “As a space, it is really nice and we get a lot of natural light coming in,” Poletz says.
A recent exhibition featured the art of collage artist Nicole Washburn.
*** 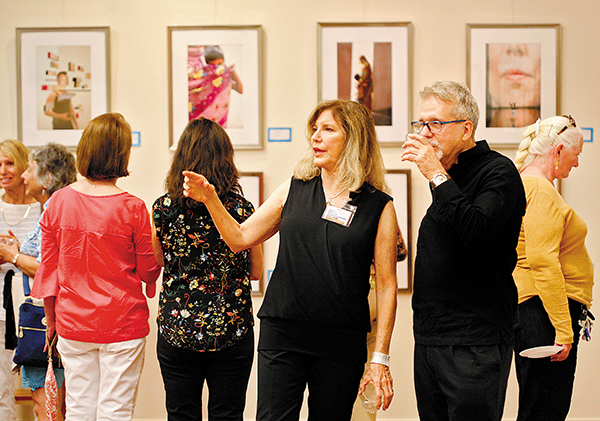 Photographer Diane Klein speaks with cousin Michael Behrman during a reception for a show of her work at the Highland Beach Library. Photos by Tim Stepien/The Coastal Star

The Highland Beach Library, at 3618 S. Ocean Blvd., has been hosting art exhibitions since the building opened in 2006.
“The director at that time made sure the community room could also function as an art gallery. Typically, we have two artists at a time for two months at a time,” says event coordinator Suzi Hayes.  “In addition, during the school winter break, we have a student art show for anyone up to grade 12. This year will be our fifth annual for that event, and we have had eight to 15 participants.”
The student art show is slated for Dec. 26 through Jan. 5.

“We want them to continue with the art,” Hayes says of the student artists. “So we give them a little reception around the holidays so they can bring parents and grandparents.”
The library’s current exhibition of paintings by Kathy Linden and photographs by Diane Klein runs through Dec. 15.
Klein says the Oct. 12 reception was a positive experience. “When you’re a photographer or painter, it’s very nice to have a venue like the library to show your work.”    She attends music concerts at the library as well. “It’s a cultural place, an oasis I would say,” she says.
***
The Manalapan library, at 1330 Lands End Road, features a year-round nature photography exhibit from residents Michael and Kelly Gottlieb.
A copy of a Winston Churchill painting, of a pool house located behind the library, also hangs year-round, says library director Lisa Petersen.
Cocoanut Dreams, an exhibit of 30 black-and-white, sepia and hand-tinted photos from 1912 through 1925, will be on display from January through mid-February.  The photographs by A. Romyn Pierson capture the lush tropical wilderness and romantic coconut groves of Ocean Ridge, Manalapan and Hypoluxo Island.
Cocoanut Dreams also was displayed at the Boynton Beach City Library this summer.