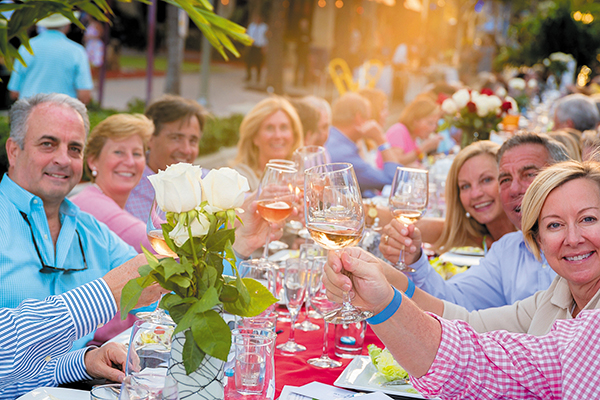 A table of diners toasts to a beautiful evening along Atlantic Avenue in Delray Beach during last year's Savor the Avenue. The event is March 26 this year. Photo provided

The biggest food and wine event for Boca Raton is gearing up for its 16th year.

Boca Bacchanal, a favorite of oenophiles for the celeb-chef vintner dinners, and with partiers for the Bacchanalia under-the-tent event, planned to kick off with the Bacchus Beckons launch party Feb. 27 at Saks Fifth Avenue. The “reveal” of matchups for chefs and hosts are announced at this party, and the ticket reservations begin in earnest.

The hot, or haute, tickets are for the vintner dinners April 6, $325 each for a five-course meal prepared by a celebrity chef, paired to a winery’s best offerings and set in a fabulous host home.

The dinners offer the chance to meet the chefs and vintners and get to chat one-on-one about the foods and wines. Saks will donate a silent auction item to each dinner.

A Southern accent is predominant among the guest chefs, with big personality chef Philippe Haddad from Atlanta’s Cape Dutch; Jimmy Bannos of Heaven on Seven in Chicago, who focuses on Cajun cooking; Regina Charboneau, a Mississippi chef whose impressive résumé includes stints in Alaska’s bush, Paris and San Francisco and several cookbooks; and Josh Harmon of Junction Craft Kitchen in Dallas.

Joining them are Italian chefs Vincenzo Betulia of Tulia Osteria in Naples, Fla., and Tony Mantuano of Chicago’s Spiaggia. He’s a Top Chef master and James Beard Award winner. Rounding out the field is chef Aaron Meneghelli of Carneros Resort and Spa in the Napa Valley.

Bubbles & Brunch, a Champagne light brunch tied to the Bacchanal, is March 18 at the new Robb & Stuckey showroom. The $30 ticket gets you a Champagne cocktail and some light bites while you browse the showroom.

The finale of the event is April 7 at the Mizner Park Amphitheater, moved to evening hours, 7 to 11. With more than 30 restaurants and wineries showcasing foods and wines in a huge dine-around event, with live music and a high-tech auction, it’s a favorite among foodies and social types. Tickets are $100 and go quickly; buy at www.bocabacchanal.com. The Boca Raton Historical Society & Museum is the beneficiary of the events.

Already tickets have sold out for most of the 15 restaurants participating in the 10th annual Savor the Avenue street-long dinner party in Delray Beach.

Held each spring, this year on March 26, the event draws more than 1,000 diners who sit at tables set in the middle of Atlantic Avenue downtown, stretching for blocks.

Chefs from area restaurants prepare a fixed five-course menu, and diners reserve seats with the restaurants. A contest for best table décor and foods is part of the affair as chefs and decorators go all out.

It will be bittersweet for 32 East, a downtown Delray restaurant that changed the face of dining when it opened 32 years ago. This is its last year for Savor the Avenue; it will close in May.

The event is sponsored by Delray and Boca magazines, and the Delray DDA. A charity is chosen each year as the beneficiary; this year’s is the Not One Homeless Hungry Student Delray Beach initiative.

For tickets to remaining seats, or to be put on a wait list, call 243-1077 or go to www.downtowndelraybeach.com/savortheavenue.

Big art and small sharing plates (crab cakes, mussels in vodka sauce, hanger steak and the like) are the theme at Avant, downtown Delray’s newest addition to the dining and art scene. Local artists have modern works on display in the moody Soho-like indoor-out restaurant that took over SoLita’s space on Second Avenue. It's part craft cocktail bar, part gallery and part grill; find it easily by the giant Lego-like critter that stands sentinel in the courtyard.

For a few moments in the Olympic 500-meter speed skating event, FAU ’10 grad Brittany Bowe seemed close to a gold medal. She was on top by nine thousandths of a second with a 37.53 time in a race the TV announcers called flawless.

But she was soon knocked off the lead and the podium. Nao Kodaira of Japan won in an Olympic-record time of 36.94 seconds. Bowe wound up fifth.

Regaining confidence after a concussion in 2016, Bowe told a Team USA reporter she was just happy to get to the games; placing near the top was icing on the cake after she did not finish close to the medals at the 2014 Sochi Games.

But a happy ending: Bowe finally medaled in South Korea, winning a bronze in the team pursuit with U.S. teammates Heather Bergsma and Mia Manganello — edging Canada by .45 seconds.

It was the first U.S. women's Olympic medal in long track speed skating since 2002.

Japan defeated the Netherlands for the gold medal.

“There were times less than a year ago I didn’t even think I’d be able to lace the skates back up, so to be top five in the world in everything I’ve skated is a blessing,” Bowe said.

She is committed to skating in the 2022 Beijing Olympics. “I definitely plan on going another four years,” she said.

Now get set for the local 2018 Senior Games.

There’s no skiing, and definitely no luge.

But over-50 competitors can try for gold, silver and bronze in a dozen events ranging from powerlifting to archery and pickleball, golf, swimming, track and billiards at the 29th annual games set up by the Delray Beach Parks and Recreation Department.

The games run March 2-9 from 8 a.m. to 6 p.m. daily at parks and YMCA gyms in Delray Beach, Boynton Beach and Boca Raton.

Age divisions begin at 50 and go up in five-year increments till 90. Then it’s just a 90-plus age category — and glory to you.     The games are open to anyone, though Delray Beach residents pay lower entry fees. Pros need not apply — until 20 years after they last competed in their given sport. No ringers allowed, unless it’s a golf pro who doesn’t earn much except from teaching.

Lest you dismiss these golden years athletes, consider that at last year’s games, Yilmaz Eryasa, 89, won gold in the 50-meter dash with a respectable time of 8.97 seconds. That was faster than Tom Johnson, who in the 65-69 group won gold in 9.68 seconds. Eryasa won gold in long jump at 6 feet, 7.25 inches.

Gold medalists can progress to the Florida International Senior Games and State Championships in Clearwater in December.

To check out schedules or to enter, contact Parks and Recreation at 243-7000, ext. 5101, or visit www.mydelraybeach.com/departments/parks_and_recreation/delray_beach_senior_games.php

Parks and Rec staff in Delray Beach have a busy month, with the games first, then the giant Easter Egg Hunt in Robert P. Miller Park on March 31.

There will be 10,000 plastic eggs stashed around the park. Some will have candy; others will have small prizes.

However, those don’t compare to the hunt at the Four Seasons Palm Beach, where the traditional egg hunt has yielded a much more lucrative prize.

In past years, it has included Fabergé eggs. As we write, it’s in the planning stages this year, and no telling what the great egg prize will be.

Beverly Hills “real housewife” Lisa Vanderpump was at Total Wine & More in Boca Center with hubby Ken Todd in February. They were sampling out their wine, Vanderpump Rose, for guests in a grip-and-grin event.