Boca entertainment has never been like this. Bob James and Fourplay one week, followed by Molly Ringwald, then Larry Carlton, with James returning with David Sanborn on June 20 and Steely Dan at the Mizner Park Amphitheater on Sept. 12. Just what the doctor ordered. 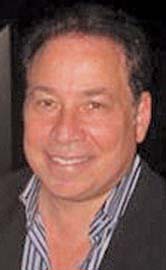 Of course, Michael Fagien isn’t your typical doctor. He spends the day looking at PETs (Positron Emission Tomography images) on his home computer and telling other doctors what’s wrong with their patients. The rest of his time is spent with his other “pet” — Jazziz, a two-headed musical monster. One head is the magazine, Jazziz, which claims after 30 years to be “the undisputed authority on jazz and style.” The other is Jazziz, the restaurant, a complete reworking of the old Zed 451 at the south end of Mizner Park.
“It’s not a jazz club,” Fagien insists as he sneaks a french fry from his son’s plate. “It’s a restaurant. The food is great. It’s fresh, local. We have a great chef (Justin Flit) and a see-through kitchen. We have a cigar lounge, a caviar bar, champagne room, private dining room, outdoor bar. We could be like a Wine Spectator or Cigar Aficionado.”
But with the promise of live entertainment seven nights a week, he concedes he’s “creating a culture of jazz.”
Actually, it could be called Jazziz Redux. In 2004, Fagien opened the prototype next to Hard Rock Hotel in Hollywood. Two years later, he closed it — wrong clientele. He regrouped, found new backers, and looked toward home.
“This is what people in Boca have been waiting for,” he said. “They’re more attuned to an upscale concept here.”
Fagien seldom slows down, except perhaps to marvel at the keyboard artistry of James, who gave us the theme to Taxi, or listen to Ringwald, who went from child singer to teen film star to mother of two to grownup torcher. But he isn’t playing solo. Twin Steven, a plastic surgeon, also has a stake in Jazziz, and wife Zakiya, an obstetrician/gynecologist, is the magazine’s publisher.
Other artists appearing this month are singers Bobby Caldwell (June 5-6) and Jon Secada (June 12-13), and guitarist and former Tonight Show bandleader Kevin Eubanks (June 26-27).
Jazziz Nightlife is at 201 Plaza Real in Mizner Park. Tickets range from $35 to $95; visit www.jazziznightlife.com, or call 300-0732.
***
Here they come, just down the street … at Mizner Park Amphitheater July 27, hey, hey, it’s the Monkees, extending their reunion tour with the no longer reclusive Michael Nesmith and paying tribute to Davy Jones, the band’s local member (Indiantown) who died last year. 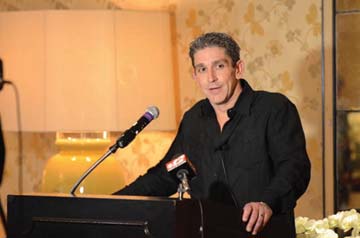 Poet Richard Blanco, who read his poem One Today at the second inauguration of President Obama, gave a reading and talk May 1 at the Ritz-Carlton Palm Beach in Manalapan for the Plum Blush of Dusk Soirée, which benefited the Palm Beach County Human Rights Council. Blanco said he did not know how he was chosen to read at the inauguration. After the event he met with the president, who hinted that the poet’s work had been recommended to him. Mary Kate Leming/The Coastal Star 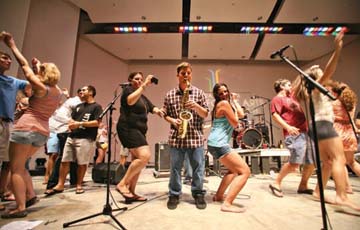 Fans swarm The People Upstairs, a South Florida reggae band, during the end of the 2013 Old School BeerFest at Delray Beach Center for the Arts at Old School Square in Delray Beach.  It had begun to rain. Tim Stepien/The Coastal Star

***
Harvey Oyer III was thrilled to accept his Distinguished Author award May 15 at Florida House in Washington, D.C., but he was more pumped at being upstaged … by Francesca Alfano, his 12-year-old stepdaughter. At the award luncheon, she sang the national anthem and, as Oyer noted, “crushed it. She was the star.”
That night at a dinner at the Smithsonian, she gave another boffo performance that  led to an impromptu tour. A Smithsonian administrator led the family to a room where he invited her to play a piano — George Gershwin’s piano.
“Are we allowed to do this?” Oyer asked.
“We’re doing it!” the official replied, and explained that Francesca was the first to play it since Paul McCartney. Stevie Wonder and Paul Simon had preceded the Beatle.
“She doesn’t really appreciate who Gershwin is,” said Oyer, a fifth-generation Floridian and great grandnephew of the legendary Barefoot Mailman. “But someday she’ll have a great story for her grandchildren.”
A Boynton Beach native and land-use lawyer, Oyer was cited for his children’s books, The American Jungle, The Last Egret and The Last Calusa, which schools throughout the state use to give students a vivid picture of “old Florida.”
Florida House was established by Sen. Lawton Chiles and his wife, Rhea, in 1973 as an “embassy” to showcase Florida’s culture and diversity. Funded solely by contributions from Florida residents, its programs include annual trustees awards to an author and an artist. Marine artist Guy Harvey will be honored this fall.
***
Mr. Rapoport goes to Washington. Fortunately for Burt Rapoport, it involved votes but not politics. The South Florida restaurateur made the trip to accept the Community Excellence Award for his Rapoport Restaurant Group at the Small Business Summit of the U.S. Chamber of Commerce. In February the Chamber included the Rapoport Group among its 100 Blue Ribbon Small Business Award winners, and then it was up to each winner to drum up votes. Rapoport asked the charities his restaurants have supported to return the favor. They did by a 1,200-vote margin.
***
The County Commission wants to build a hotel at the Morikami. The one-story ryokan, initially proposed more than three decades ago, would feature traditional Japanese architecture and be built with private funds. As for possible names, how about Hotel Amanohashidate. That’s “Bridge to Heaven” in English. The bridge, one of Japan’s three most scenic wonders, is near Miyazu, George Morikami’s hometown and Delray’s sister city.