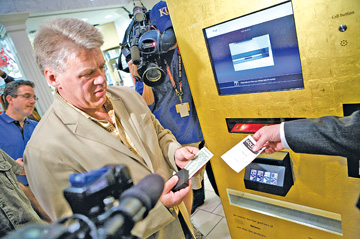 Like bees to honey, shoppers are converging on a new hive at Boca’s Town Center. This honey is golden, all right, but you’re not likely to stir it into your tea or drizzle it onto your corn flakes. But what a breakfast!
In the middle of the main hallway near the mall’s food court, a new vending machine will take your money in exchange for … yes, gold.
The brainchild of Germany-based Ex Oriente Lux AG, Gold-to-Go dispenses 24-karat gold in chips, bars and coins. The cost is pegged to the current global price, updated every 10 minutes, plus a markup of 5 to 15 percent.
At pre-Christmas rates, a one-gram chip of gold ran near $110, while the most expensive item in the box, an American Eagle coin, was claiming about $1,400.
In use in Europe and Abu Dhabi since 2009, what better place to debut in the States than Bunco, er Boca, Raton.
“I’m calling myself Goldfinger,” joked Glen Calder of TransMedia Group, the Boca-based PR firm handling the local intro for U.S. affiliate, PMX Gold, which is HQed in Boca.
On the Saturday before Christmas, the on-site attendant reported 30 to 40 sales over a five-hour span. PMX hopes to bring in about a quarter million a month with gold-savvy Las Vegas next in line. If the local test pans out, additional machines could pop up at other Simon malls around the country.
The machines hold 320 items, but larcenous customers are advised that the Town Center is regularly patrolled by Boca Raton police and by security guards on Segways. Plus, as Calder pointed out, “They are bolted down.”

Why should men have all the fun? The fifth annual Allianz Championship, set for Feb. 7-13 at Broken Sound Club, will give women a chance to show off their golf skills. It should be fun … and colorful, since the new “event within the event” will feature a women’s pro-am sponsored by Lilly Pulitzer. The package includes a clinic by one of the playing pros, lunch, golf with a tour golfer, tournament VIP tickets and a Lilly gift package. Cost is $750 (proceeds to Boca Raton Regional Hospital).
Other new events include a 5-kilometer run/walk on the Broken Sound course and “Birdies for Charity” which allows area nonprofits to raise funds based on the number of birdies scored during the tournament. The more birds, the more bucks.

Chairman Charlie Siemon tags Boca’s fifth Festival of the Arts March 4-12 as the “most diverse and engaging yet.” The lineup includes the Canadian Brass; Flamenco guitarist Milos Karadaglic; pre-teen singing whiz Jackie Evancho from America’s Got Talent; Young Stars of the Metropolitan Opera; Piano Latino with Eddie Palmieri, Michel Camilo and Alfredo Rodriguez; Ballet Hispanico; a screening of The Wizard of Oz with the score performed live by the Boca Raton Symphonia; the festival’s Distinguished Writer in Residence Doris Kearns Goodwin and Emmy-winning writer of The Daily Show with Jon Stewart Kevin Bleyer.
All events at the de Hoernle Amphitheatre at Mizner Park.  Tickets: wwww.festivaloftheartsboca.org or call 866-571-ARTS.
The festival will receive a Palm Beach County Cultural Council Award for Outstanding Festival during a dinner Feb. 10 at the Kravis Center in West Palm Beach. Tickets are $250. Call 471-2901, Ext. 310.

How sweeeeeeet it is. The 10th Annual Chocolate Decadence: The Sweetest Party in Town returns to Boca Center Feb. 3. Chocolate delights from more than 30 restaurants, silent auction, raffles, dancing. Sponsored by the Junior League of Boca. General admission, $30; VIP, $75. To buy tickets, log on to www.bocachocolate.com.

The Piñon Grill, a stylish restaurant and bar featuring a casual-upscale menu, is the latest American eatery to open in Boca — it’s near Bloomingdale’s at Town Center mall. A chic bar, featuring a wine wall and beer-chilling station, with lounge area and tables, makes up a quarter of the restaurant. The brown and gray interior is reminiscent of a Native American museum with custom-designed piñon tree sculptures and textiles on the earthy walls. Banquettes and tables are scattered around the room, open to the kitchen for watching the chefs turn out fish, meats, and seasonal vegetable dishes from the grill. Lunch, dinner and Sunday brunch are served.

Worth Avenue looked busy…
Ferragamo was packed with a special party aimed at shoe-buyers.
Another private party filled Tiffany.
Graf Jewelers, too!
Valets in black caps and red jackets steered the invited social elite from their luxvees — including a very un-Ferrari-like silver and blue Ferrari — into Cartier, which for the umpteenth year teamed with a charity for a Christmas party. This season’s beneficiary: Caron Renaissance Treatment Center: a Delray Beach-based substance-abuse treatment center.
Waiters circulated with Champagne, caviar crisps and stone crab salad on silver spoons. Cartier Director Clemens Ritter von Wagner and Caron’s 2011 Renaissance Gala Chairman Petra Levin made sure that everyone felt comfortable, since for five days, 10 percent of Cartier’s sales went to Caron.
But even in Palm Beach, life is not what it seems. The Grinch may not have stolen Christmas, but he’d furloughed some long-timers.
“Where’s Santa?” asked Arlette Gordon, a Cartier party regular, lamenting the absence for the first time in many years of “Santa to the Stars” Brady White. “It’s just not the same without him.”
Still, a good time was had by all, as a photographer caught the women trying on Cartier’s newest designs … easy hints for husbands and boyfriends.
Across the street, Ta-boó was busy, for which owner Franklyn DeMarco was grateful.
“Everyone’s in town now,” he said. “But what about after the holidays. … And in the summer. The days of being open just in the season are long gone. We need people year round. The street (Worth Avenue) is beautiful now. But I hope the $16 million does some long-term good.”

Mario Batali had logged a busy day, giving a cooking demonstration for Publix Apron’s Cooking School at The Morikami. The Food Network favorite was hungry, and he wanted someone else to do the cooking. He also wanted a place where he could relax with an old school friend who now lives in Boca.
They motored to Delray’s 32 East, where a friend runs the kitchen. One problem: Nick Morfogen was away visiting his kids.
“We still had a good time,” 32 East owner Butch Johnson said of the Dec. 13 encounter. “Mario got there late and we had closed down, but he ate and we did the bulk of our partying with no one around. He stayed late; we enjoyed some grappa and told some stories.”
Batali hightailed back to New York for an appearance on Jimmy Fallon’s show.
The Apron’s Cooking School continues Jan. 10 with the Food Network’s newest Iron Chef, Jose Garces, followed on Feb. 5 by actress and The Crabby Cook author Jessica Harper, and Feb. 20 by chef, author and Tuscan travel expert Gina Stipo. (www.publix.com/aprons).

Atlantic Avenue may be one of the hottest streets on the planet, but life isn’t all peaches and crème fraiche. Location does not guarantee success … nor does celebrity.
Within a year, two founders of “Floribbean” cuisine have now come and gone. Mark Militello’s engagement at The Office began in late ’09 and ended barely three months later when owner David Manero pink-slipped him via text message.
The Office remains busy, with new menu items, new Monday-Friday happy hour, cigar menu and, for the first time, reservations.
A block north in Pineapple Grove, Taste Gastropub is history.  Rumors have owner Robert Workens reopening with a different concept.