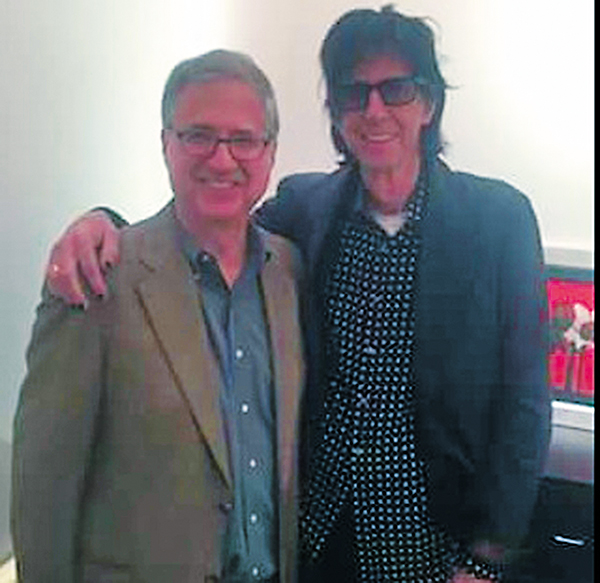 Back in 1976, The Cars was an obscure club band playing around Boston, the group’s career no doubt helped along by such gigs as the Harvard freshman class mixer. Palm Beach County Commissioner Steven Abrams missed that show, as he was a lowly freshman at the University of Pennsylvania and wouldn’t transfer to Harvard until the following autumn. By then, the music from the band’s debut album, vocals by Ric Ocasek, was echoing through the dorms along the Charles River.

Both have since enjoyed considerable success. On April 14 in Cleveland — the band’s spawning ground — The Cars will be inducted into the Rock and Roll Hall of Fame. After graduating from Harvard, Abrams earned a law degree at George Washington University and clerked in the Reagan White House before settling down in Boca Raton. After three terms as Boca’s mayor, he now sits on the County Commission and had the honor of serving as the county’s first mayor when the office was created.

But it wasn’t until St. Patrick’s Day that the politician and his rock hero met. Also an accomplished visual artist, Ocasek was showing his work at Wentworth Gallery at Boca’s Town Center. Abrams’ wife, Debbie, who says her husband has been a huge fan of Ocasek’s for years, wrangled an invite to the opening.

“He fondly recalled his Cambridge, Mass., years,” Abrams said, but confided he didn’t buy a painting. “I wish I could afford one … because unlike some musicians who paint, he is a very good artist.”

Joining The Cars at the Hall of Fame induction will be Bon Jovi, whose leader Jon Bon Jovi is a new Palm Beacher. He laid out a cool $10 million for a 6,803-square-foot home on Ocean Boulevard just a few blocks north of The Breakers. Built in 1985, it was most recently appraised for taxable purposes at $6.5 million, but when your personal fortune is estimated at $410 million, what’s a few bucks here or there?

Of course, Bon Jovi is not the first from his band to call the Palm Beaches home. Drummer Tico Torres, also an artist of some renown, called Admirals Cove home for two decades before recently moving to Miami.

The suicide last winter of another Palm Beacher, Allman Brothers drummer Butch Trucks, stunned a legion of fans both international and local. As talented a character as he was a drummer, Trucks could be a curmudgeon with his rants on politics and mistreatment of people, but mostly, he got in his licks with a twinkle in his eye.

With that in mind, professional photographer, collaborator and friend Michael Price decided it was time for a salute, one that Trucks would have relished. He summoned diehard local friends and fans to a back-room gathering at Pizza al Fresco in Palm Beach.

With general manager Jose- Luis Duran handling the pizza delivery and the libations, the dozen or so who could make it shared Trucks and Allman stories late into the evening. They were bolstered by inside observations from Allman’s bassist, Oteil Burbridge, who just finished a tour on bass with Dead & Company, the latest assemblage of The Grateful Dead.

Burbridge, who recently moved to Boca Raton, and Allman percussionist Marc Quinones, now a resident of Lake Worth, are expected to be jamming at the Wanee Festival in Live Oak on April 20 with Les Brers, an Allman spinoff formed by Trucks.

A week before Wanee, the “Greatest Art Show Under the Sun” sets up April 13-15 in Delray Beach. The 56th Delray Affair will cram more than 500 artists, crafters and food vendors into 12 blocks along Atlantic Avenue from the tennis center to the Intracoastal Waterway. The beer and wine garden and the Delray Honda Entertainment Zone return to Old School Square, and local restaurants will again offer regular and happy hour menu specials plus the return of Delray Affair After Dark. (www.delrayaffair.com)

Elsewhere on the music scene, on April 16 at Lynn University, Atlanta-based pianist and vocalist Nancy Elton will perform a mini-recital at 2 p.m., then teach a master class — free and open to the public. That night at 7, flute legend Nestor Torres will lead a master class — also free to the public — and will return April 21 and 22 to perform in concert with the Lynn Philharmonia.  (Ticket info at www.events.lynn.edu.)

Big happenings at Florida Atlantic University, too. John Kelly and wife, Carolyn, host the President’s Gala on April 7 in the FAU Stadium’s Greenberg Foundation Tower with student entertainment and art, fireworks and a live auction (tickets $300).

The gala will be the first opportunity for many FAU supporters to meet the school’s new athletic director, Brian White. He replaced Pat Chun, who left in January for the same job at Washington State University.

White, the school’s sixth athletic director, also will wear a vice president’s mantel. A graduate of Notre Dame, with an MBA from Ohio U., he claims strong credentials in a family with strong credentials. From 2007 to 2012 he was an account executive with IMG College, a major sports marketing operation on the college scene. He then served on the athletic staffs at Louisiana Tech, the University of Tulsa and West Point before heading to the University of Missouri, where as deputy athletic director he oversaw football and men’s basketball, broadcasting and fundraising. In one year Missouri doubled athletics fundraising to more than $50 million.

The new AD didn’t have to go far to make his first hire. After his fourth losing season, Michael Curry, a former NBA player, was fired March 16 as basketball coach. All White had to do was pick up the phone and call brother Mike in Gainesville. Voila! Dusty May, White’s assistant coach from 2011 to 2015 at Louisiana Tech and since 2015 at Florida, now has his first head coaching job.

Though never a college player, May has some interesting credentials. As an undergraduate, he served four years as team manager for the Indiana Hoosiers, then was on the video staffs at Southern Cal and Indiana before moving to assistant coach positions at Eastern Michigan, Murray State, Alabama-Birmingham and Louisiana Tech.

May, White said, was his “No. 1 choice … The future of the FAU men’s basketball program is bright.”

The family that plays together …

After revelations last year of multimillion-dollar payouts to women who made claims of various sexual improprieties, Fox News dumped Bill O’Reilly, who was cable news’ top-rated personality for 16 years. Since he’s no longer tied to a desk in New York, he can podcast The Spin Room from just about anywhere. Surprise, surprise, he found his way to the Palm Beaches, where he took in some fresh air and solid food at the Dune Deck at Lantana Beach.

Always on the move. … After graduating from high school in Pennsylvania, then-18-year-old Larry Rosensweig spent a year in

Japan living with three families. He returned to the States to study East Asian language and culture at Michigan State and Harvard. Then he headed to Palm Beach County, where at age 25 he became the first director at the Morikami Museum. He held that position for 28 years, then spent five years as director of advancement at the Norton Museum.

More recently he has served as a consultant for arts-related organizations, raising money for the international American Committee for the Weizmann Institute of Science and the homegrown Spady Cultural Heritage Museum in Delray Beach.

Rosensweig’s efforts have not gone unnoticed. The Florida Association of Museums recently honored the four-decade Delray Beach resident with a lifetime achievement award for his profound impact on museums and the lives of Florida citizens. Well done.