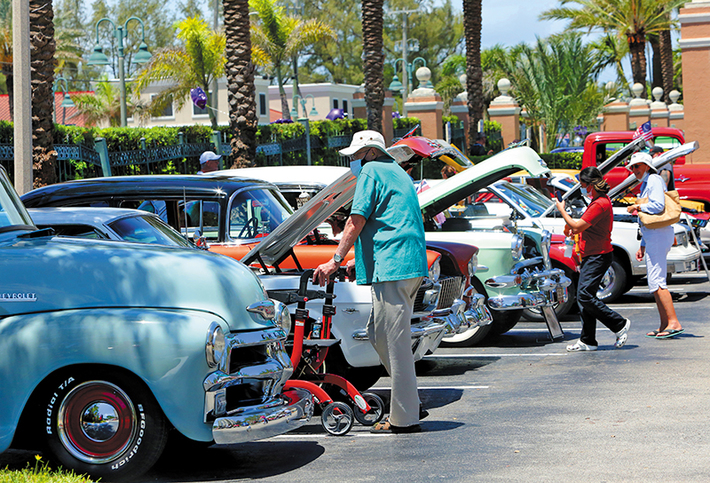 Residents of the Carlisle Palm Beach and other car enthusiasts look at vehicles brought to the inaugural Carlisle Classic Auto Show. Proceeds will go toward the Alzheimer’s Association’s ‘Longest Day’ fundraiser on June 21. Photos by Tim Stepien/The Coastal Star

It’s not every day that you discover a 1936 Auburn Boattail Speedster parked in front of a South Florida senior living community.

On May 15, however, there one sat — a rare collector’s dream car on display at the Carlisle Palm Beach in Lantana. It was part of a fundraiser to support the Alzheimer’s Association’s “Longest Day” event.

Owned by Hypoluxo Island’s Joshua Kobrin and his father, David, the Auburn Speedster — sometimes referred to by onlookers as the “Cruella de Vil car” — was one of the stars of the Carlisle Classic Auto Show.

Not far away sat a 1965 Rolls Royce Silver Cloud III that owner Mel Kantor of Boynton Beach says draws a lot of attention when he takes it for a spin on weekends. “It’s a real head turner,” he said.

What makes the car special?

“It’s the end of an era,” Kantor said, explaining that after 11 years the Silver Cloud was replaced by the Silver Shadow. “I love the styling.”

Also nearby was a 1957 Ford Thunderbird — one of the first generation of T-Birds — owned and displayed by Kobrin’s father.

“My dad always had a classic car in the garage and I guess I followed in his footsteps — or his gas pedal foot,” Joshua Kobrin said.

In all, about 40 classic cars were on display in the Carlisle’s front parking lot during the fundraiser, ranging from a Model A Ford and 1955 MG to a 1963 Buick Riviera and even a new Tesla. 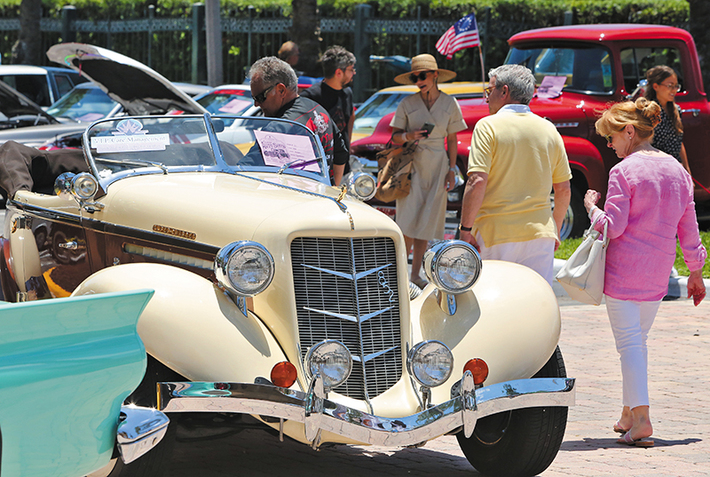 Cars at the show included a 1936 Auburn Boattail Speedster owned by Joshua Kobrin and his father, David.

Adding to the special atmosphere — attended by many of the Carlisle’s 240 residents — was entertainment provided by an Elvis impersonator. Also available were food, vendors providing health services, and even ice cream from an old-style Good Humor Ice Cream truck.

Organized by Steve Saffer of Cruise Boca, the show drew a group of classic car owners who not only enjoy getting together to display their classics but are happy to be part of an event that benefits a charity.

Money raised from the event will be donated to the Alzheimer’s Association “Longest Day” event. The fundraiser is held every June 21 with participants from across the world holding events and activities that raise awareness and support the fight against Alzheimer’s.

The car show was a first for the Carlisle, according to Executive Director Richard Tournesy, who said past fundraisers for Alzheimer’s included an art auction and raffles with residents.

Supporting the fight against Alzheimer’s, Tournesy said, is a good match for the Carlisle, which has a 67-bed memory care unit.

“We know what families go through,” he said. “We see it every day and we want to make sure we contribute.”

The show turned out to be an ideal way to do just that, with residents and family members taking part and members of the Carlisle staff going to work to help stage the event.

Tournesy said he is looking forward to hosting a car show again next year.

“It is well supported by our community,” he said.