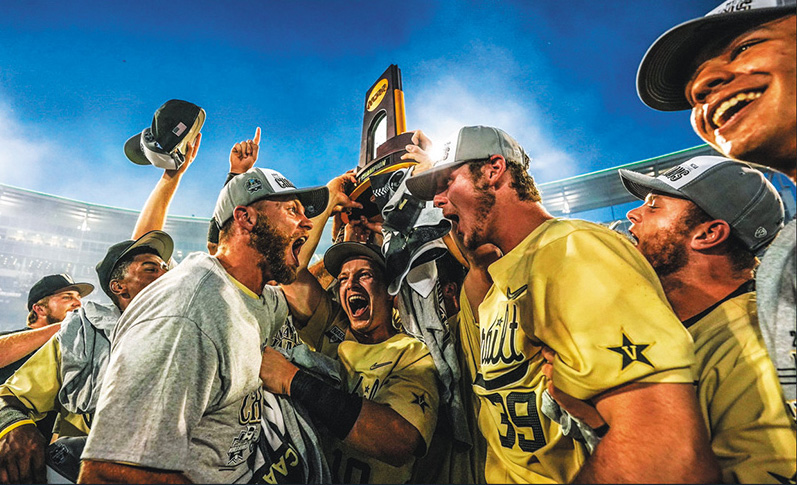 Jake Eder (No. 39, right) and his teammates at Vanderbilt University celebrate their NCAA championship. Photo provided

‘It was unbelievable’: Ocean Ridge pitcher closes out NCAA title

There is no greater feat for a college athlete than to win an NCAA championship.

Ocean Ridge resident Jake Eder reached that pinnacle in late June and did it in style, pitching three innings to close out Vanderbilt’s 8-2 victory over Michigan. That gave the Commodores the College World Series title in Omaha, Neb.

“When it was all said and done, it was unbelievable,” said Eder, a 6-foot-4, 210-pound sophomore left-hander who turns 21 this month.

“I pretty much knew I wanted to go there as soon as my visit ended,” Eder said.

Used as a starter in nine of his 11 appearances as a freshman, Eder struggled, compiling a 1-4 record and 5.45 earned-run average.

“I kind of went through some stuff,” Eder said. “The first year in the SEC is kind of a learning curve.”

Coach Tim Corbin moved him to the bullpen to start this past season, first as a closer, then a middle reliever and finally what he termed “kind of an end-of-the-game type pitcher.”

“He really grew over the course of the season,” said Corbin, who was named National Coach of the Year after the season. “This is a kid who really, really loves pitching. It’s all he thinks about, it’s all he does. He’s got a bright future just because of his passion for what he does, and how he goes about it.”

Eder’s numbers improved dramatically across the board, notably in ERA, where he improved to 2.97, and in strikeouts-to-walks ratio, which improved from 37-22 to 35-15.

“We had a closer per se, but he was kind of that next guy,” Corbin said. “One of (our) top guys out of the bullpen. He really grew into that, and just developed more consistency the last third of the season.” 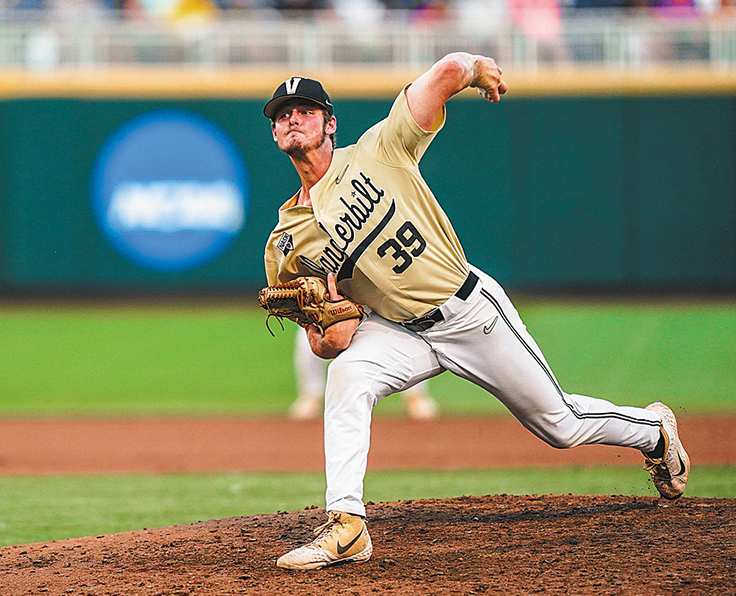 Corbin trusted Eder enough to use him twice as the Commodores, who finished 59-12, won the Southeastern Conference tournament. He pitched two shutout innings in an 11-1 win over Auburn, then allowed one unearned run over 32/3 innings in an 11-10 victory over Mississippi in the final game. His lone appearance in the NCAA Regional featured a perfect ninth inning in an 8-5 victory over Indiana State after the Sycamores had scored four runs in the inning.

After the Commodores took care of Duke in the Super Regional, Eder got the College World Series victory that propelled them into the best-of-three championship against Michigan. Working the seventh and eighth innings against Louisville, he gave up two runs (one earned), but benefited from a two-run rally in the ninth that secured a 3-2 victory.

Michigan won the first game 7-4, Vandy the second 4-1, setting up a winner-take-all finale. Eder told Brown, his pitching coach, how it would unfold: “We knew Mason Hickman was starting, so I told Scott it would be Mason to me, and that’s what we were going to go with.”

Hickman did his job, limiting the Wolverines to one run on four hits as Vandy opened up a 6-1 lead by the time Eder took over in the seventh. He allowed two hits and one run to wrap up the historic win.

“The last two innings the energy was flowing,” Eder said. “I was trying to juice it up a little bit, (so) I had to take a breath and finish it off.”

Leadoff hitter Ako Thomas was the last batter he faced with two outs in the ninth.

“I got two strikes on the guy and when I saw him pop it up,” to centerfielder Pat DeMarco, “I knew. I just kind of turned around and waited for him to catch it and everyone celebrated.”

Rushed by catcher Philip Clarke and the rest of his teammates, Eder quickly found himself at the bottom of the celebratory pile.

“It’s definitely something everyone on that team will remember forever,” he said. “That was a really special team. It was great to be a part of it.”

After a few days back home with his parents, Jeffrey, an orthodontist in Boynton Beach, and Amanda, Eder was off to New

England to pitch for the Orleans Firebirds in the highly competitive Cape Cod League.

“That should be good for him,” Corbin said. “The more touches he gets, the more confidence he’s going to get.”

Asked what Eder needs to work on, Corbin replied, “His command more than anything. He’s got a very strong arm, a consistent breaking ball, and now it’s just a matter of harnessing his pitches. The more he gets on the mound you’re going to see a more refined product.”

Said Eder, “The biggest thing is just knowing what kind of pitcher I am. I’m a ‘stuff’ guy over a command guy, so I have to have enough command not to walk guys. Let my stuff play in the zone rather than pinpoint pitches.” 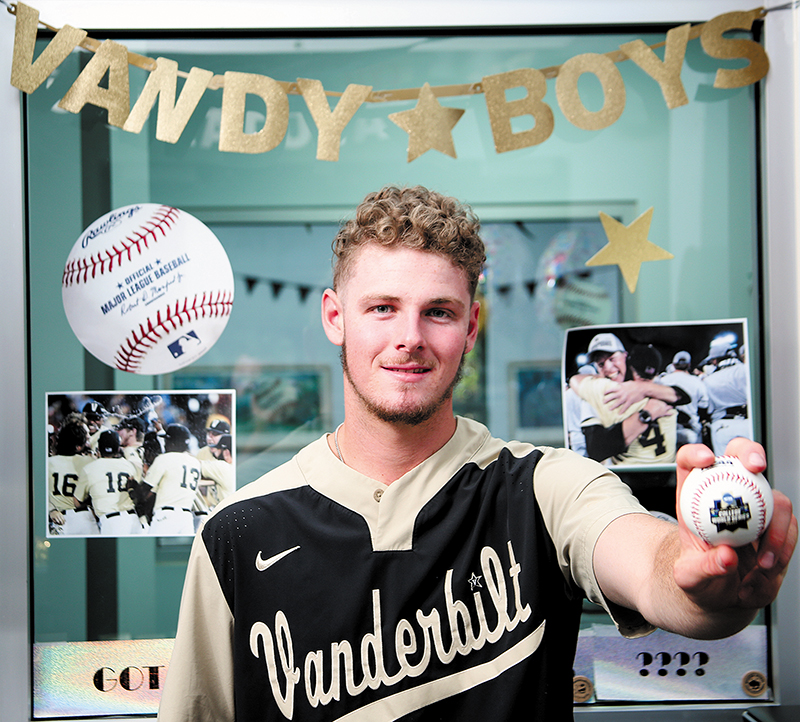 Eder planned to make a handful of starts in the Cape Cod League before that ends in early August, then head back to Vanderbilt, where he hopes to be a starter next season.

Eder has learned in his first two years that keeping up academically at the SEC’s top academic institution makes for a tough balancing act with his dedication to baseball.

“It’s a tough school,” he said. “It’s a tough schedule, especially in the fall. We’re training every day, working out every day. You’re learning how to balance it, manage your time. It’s definitely a full load.”

Drafted in the 34th round out of high school by the New York Mets two years ago, Eder will become draft-eligible again after next year. Major League Baseball is a “realistic” goal, he admitted, but one that can wait.

“For me the goal is to come back and try to win another national championship,” he said. “The draft will take care of itself.”