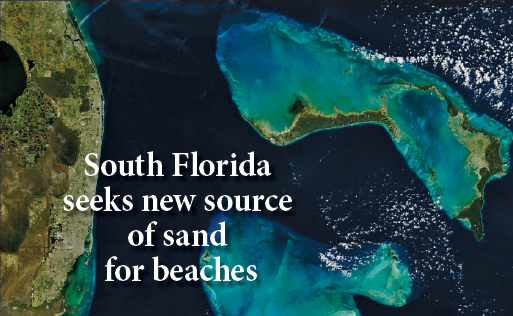 Florida (left) may import sand from the Bahamas for use in beach renourishment. The light blue areas of this satellite image show the shallow bottom around the Bahamas. Photo by NASA

Beach sand is constantly on the move, generally north to south, and is as fluid as the ocean that pounds it. Most Floridians had never really considered this geological phenomenon, but they have learned the hard way that barrier islands are constantly reshaped by winds, water currents and development.
In recent decades, coastal residents noticed that sand was leaving the shore and not coming back. Waves, particularly those powered by tropical storms and hurricanes, carved out cliffs in formerly flat shores and washed sand out from underneath high-rise condos and beachside houses.
When faced with thinning beaches and encroaching ocean water, resourceful beach towns simply dug up offshore sand and pumped it onto the beaches, grumbling about costs as the big dredges did their work, but doing whatever it took to keep the beaches nice and wide for tourists.
Then, the unthinkable happened: The offshore sand ran out.
No longer were they looking at expensive dredging for sand, they were looking at no sand.
Miami-Dade and Broward counties have depleted their offshore sand, and the end is in sight for Palm Beach County.
South Palm Beach has no sand it can dredge and shoot onto the narrow strip of shore that’s mostly walkable only at low tide. Boca Raton may have only 20 years’ worth of sand left barring more frequent tropical storms and hurricanes.
It turns out that sand is not infinite. The sand that can be dredged offshore is from a slender ribbon of sandy floor between the shore and reefs. Just beyond the reefs is a steep drop-off that’s too deep for even the largest dredges.
Coastal residents face new hard truths — sand is more than a place to stick an umbrella on a sunny day. It is the only barrier between a relentless and unforgiving ocean and seaside towns, beachfront mansions, high-rise condos and roads.
Broward County already has started raising State Road A1A two feet when sections of the road are rebuilt because of coastal flooding.
During storms and high tides, ocean water has rushed underneath buildings, exposing foundations and supports and flooding streets.
Wildlife, too, is suffering from eroding sand. Beaches are a nesting ground for endangered sea turtles and crucial feeding areas for sea birds.

Eyes across the sea for sand
Sea oats and dunes placed to keep the ocean at bay are no longer up to the job. Seaside towns are looking at options and they aren’t good. Inland sand is expensive to mine and transport. Man-made remedies for capturing sand, such as groins, cause myriad problems.
The last resort is buying foreign sand, and South Florida is looking 60 miles east to the glorious white-sand banks of the Bahamas. The latest idea from elected officials and perhaps the only option left is buying sand from the Bahamas and transporting it by barge across the Gulf Stream to South Florida.
But buying foreign sand is illegal. Two bills in the U.S. Congress hope to change that. The Sand Acquisition, Nourishment and Development Act, introduced by Rep. Lois Frankel, D-West Palm Beach with fellow members of the Florida congressional delegation, and a companion bill in the Senate introduced by Florida Republican Sen. Marco Rubio would repeal a law that does not allow communities to buy sand from the Bahamas and other foreign countries to replenish shorelines.
Bahamian sand could alleviate the high price of trucking in sand for counties like Miami-Dade and Broward that have depleted their usable sand offshore, Frankel said, and would mitigate potential legal battles over domestic sand sources between northern counties, which have relatively more offshore sand, and southern Florida counties.
Most South Florida coastal towns have endorsed the bills.
The stakes are high. “Replenishing our shorelines protects our jobs, our environment and our property,” said Frankel.
“It’s time to lift the antiquated federal prohibition on replenishing Florida beaches with foreign sand,” said Rep. Debbie Wasserman Schultz, D-Weston. “The current law hurts Florida taxpayers through all the existing long-distance hauling costs involved. Our beaches are not only vital civic treasures for our residents, they’re also a pillar of Florida’s tourism economy. We need to give our local communities more tools to keep our beaches healthy and attractive. The SAND Act will do that.”

Options are waning
Coastal towns also are looking at ways to hold on to any sand that comes their way. Of the few possibilities, groins are getting the most attention. Groins are installed to trap sand closer to shore, but they also can starve towns to the south of sand that would have flowed in their direction.
Hillsboro Beach in Broward County has sued seeking damages and legal fees from Deerfield Beach over Deerfield’s groins. Hillsboro claims the groins have caused millions of dollars’ worth of erosion of Hillsboro’s beaches.
Manalapan Mayor Keith Waters says his town is ready to do “whatever it takes” to stop South Palm Beach from installing groins.
And even with the installation of groins, towns will still have to pay for more sand as they put in the groins. It will take roughly 80,000 cubic yards of sand to cover the seven groins once the South Palm Beach shoreline stabilization plan is completed, according to project engineers. That is enough to fill more than 5,000 standard commercial dump trucks.
Engineers say the project has a life span of 50 years and the town will have to set aside $200,000 a year to cover the cost of replenishing sand that washes way. That price is sure to go up as sand becomes scarcer.
Where South Palm Beach will find the sand it will need for the next half-century and how much it will cost decades from now are questions no one can answer.
“There is going to be a sand shortage, that’s for sure,” said South Palm Beach Mayor Bonnie Fischer. “It’s good to look to the future and look for other sand sources.”
Fischer supports the efforts in Congress to allow the importation of foreign sand but worries about cost.
“Sand from the Bahamas is expensive, basically because of the expense of transporting it here,” she said.
Sand mined from Central Florida, called “upland sand,” is also expensive even though it is generally superior in quality to offshore sand, she said.
“The granules of upland sand are a better match for turtles and more like what’s here. Dredged sand often has too much clay in it,” Fischer said.
Jennifer Bistyga, coastal program manager for the city of Boca Raton, says the city has depleted the offshore “borrow areas” that have been dredged in the past.
“We are now doing a geotechnical search looking for more offshore sand, and we  have identified new sources,” Bistyga said. “We hope to have sand for 20 years.”
The lack of offshore sand in the future, she said, is a “definite concern.”

Competition for sand
Meanwhile, sand worldwide is becoming scarce. Used in concrete, glass, computer microchips and roads, sand is our most essential natural resource after air and water, and we’re running out, mostly because of exploding development. We’re using sand faster than it is produced — the erosion that makes sand takes thousands of years.
Desert sand is not conducive to making building materials such as concrete and glass and blows away on beaches, so the world relies on sand and gravel, called aggregates, from seashores and river beds.
A case in point is the city of Dubai in the desert country of United Arab Emirates, which ran out of marine sand and has to import sand from Australia for its mammoth developments, according to the United Nations Environment Programme.
“A conservative estimate for the world consumption of aggregates exceeds 40 billion tons a year. This is twice the yearly amount of sediment carried by all the rivers of the world,” according to United Nations research.
Buying sand may be only buying time, some city officials say. Bahamian sand is a stopgap measure. But it’s the only game in town at present.
“There’s a diminishing return when it comes to bringing in sand — there’s only so much of it out there. Who knows what it’s going to cost 10 or 20 years from now?” asked Fischer, the South Palm Beach mayor.
But since the dawn of tourism in the Sunshine State, South Florida has been known for its golden sand beaches, enriched with every turquoise Atlantic Ocean wave that tumbled on it bringing sand from somewhere else. And towns will hang onto it as long as they can.
— Dan Moffett contributed to this story