How red, or blue, are the towns and neighborhoods that make up The Coastal Star’s distribution area?
Red enough that Donald Trump won South Palm Beach, Manalapan, Ocean Ridge, Briny Breezes, Gulf Stream, most of Highland Beach and coastal Boca Raton, and parts of coastal Lantana, Boynton Beach and Delray Beach.
Blue, here and there, to the extent that Joe Biden won most of coastal Delray Beach, a sliver of Highland Beach, a part of coastal Boca Raton, and the County Pocket between Gulf Stream and Briny Breezes.
That’s 15 of the distribution area’s 20 precincts that went for Trump, and five for Biden. Or 53.9% of the area’s overall vote that went for Trump, compared to 45.4% for Biden, according to a Coastal Star analysis of data from the Palm Beach County supervisor of elections website.
Not too surprising in an area where Democratic voters are outnumbered both by Republican voters and those registered with other parties or no party. Of the distribution area’s 27,624 voters registered in time for the Nov. 3 election, 11,258 or 40.8% were Republicans, 8,154 or 29.5% were Democrats and 8,212 or 29.7% were other or no party.
What is surprising, perhaps, is that Biden picked up more non-Democratic votes than Trump did non-Republican ones in 18 of the 20 precincts, for an area total of at least 1,856 such crossover votes compared with at least 620 for Trump.
Those pickups helped Biden win five precincts even though Democratic voters outnumbered Republicans in only three of them. And they contributed to Biden’s winning Palm Beach County, 56% to 43.2%, just as Trump’s area numbers contributed to his taking Florida with 51.2% of the statewide vote to Biden’s 47.9%.
And, of course, it is the state total that delivered Florida’s 29 electoral votes to Trump. But Biden scored a 306-232 triumph nationwide and became the 46th president of the United States.
So what does all that tell us about the coastal area’s voters?
That they, like voters throughout the nation, are primarily divided into two types — one that makes decisions based on policy, and the other on personality. So say a couple of Delray Beach pros who know Palm Beach County politics about as well as anyone.
Andre Fladell has been consulting for campaigns, mostly Democratic but not always, for more than 40 years. Mary McCarty served as a Delray Beach city commissioner, Palm Beach County commissioner and the county’s Republican Party chair for 22 years before she left politics in 2009 after pleading guilty to a federal charge of honest services fraud and serving 21 months of a 3½-year prison sentence.
In national and statewide races, the policy voters typically are the extremes of both sides, the hard left and hard right who vote the party line. Fladell also calls them the “message voters.”
Personality voters, or what Fladell calls “messenger voters” tend to be the soft Republicans and soft Democrats, and they often meet in the middle.
“The middle tries to navigate between message and messenger, and for soft Republicans, the messenger became the overriding factor,” he said. Biden “peeled off the soft Republicans.”
The crossover votes for Biden weren’t voting against Trump’s immigration or tax policies, Fladell said. They were fighting a guy who kept attacking Rosie O’Donnell and claiming he was the greatest ever.
“Humility gets the middle,” he said. “Trump had policies the Republicans liked and the narcissism they didn’t. ... Biden became more warm and fuzzy on a number of levels, but it didn’t matter who ran for the Democrats. It was a referendum on Trump.”
Similarly, McCarty said the ability of the coastal area’s Republican plurality to give Trump a majority of the area’s vote “speaks to people looking at policy over personality, and supporting those policies of President Trump compared to Joe Biden’s policies.”
So what about McCarty’s east Delray neighborhood, precinct 4102, where Republicans outnumbered Democrats 569 to 469 but Biden won 594 votes to Trump’s 553?
“In my precinct, more people were voting personality than policy,” McCarty said. “They were just tired of the tumult that we’ve had the past four years.”
But here McCarty diverged from Fladell, as she described the tumult not as of Trump’s making but as “the pushback” Trump had received from Democrats since his inauguration. “A lot of people were just exhausted,” she said.
In the count for McCarty’s precinct, Biden picked up 125 more votes than there were Democrats in the precinct while Trump won 16 fewer votes than there were Republicans.
That means Biden had to have won at least 125 votes from either Republicans or the precinct’s 468 other- and no-party voters.
Six people voted for other candidates, while 353 sat out the election. With that many people sitting out, the precinct had a voter turnout of 76.6%, very close to the county’s average turnout of 76.3%.
Of the neighborhood’s swing to Biden, McCarty said, “I’m a policy voter. But I know Republicans, friends of mine, who can’t get past the personality issue, so it doesn’t surprise me.”
Another resident of the neighborhood, a Democrat who voted for Biden, also wasn’t surprised. Coldwell Banker real estate agent Terry Roy said there were no Trump yard signs in the neighborhood whereas there were Biden/Harris signs, including one in her yard that vandals stole or knocked down several times and even once replaced with a Trump sign. A stalwart, Roy reposted her Biden sign each time, always a little more securely than before.
She said she doesn’t talk to neighbors about the election — “It’s not the type of thing you talk about in polite company” — but added, “Republicans that I know who voted for Trump again don’t advertise it.” 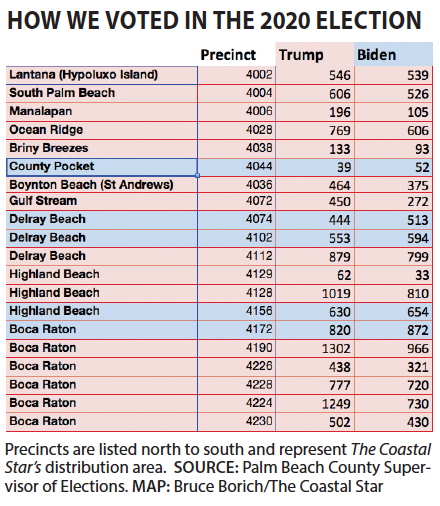 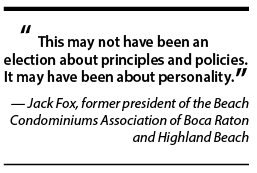 Jack Fox, who lives at the Yacht and Racquet Club in Boca Raton’s precinct 4172 and is a former president of the Beach Condominiums Association of Boca Raton and Highland Beach, said he was not surprised that Biden won the precincts in Boca Raton and Highland Beach.
Like Fladell and McCarty, he said, “This may not have been an election about principles and policies. It may have been about personality.
“I know a lot of Republicans who voted against Trump clearly because of his behavior. They didn’t like Trump’s personal traits. His total unpresidential behavior lost Republicans the election.”
Fox also noted that some women in his precinct “were just incensed by President Trump’s behavior.”
“Trump lost the support of suburban women,” he said, “and many women in Palm Beach County were suburban women when they lived up North.”
County Democratic Party Chair Terrie Rizzo agreed that woman voters and many other people just tired of Trump may have contributed to Biden’s pickup of crossover votes in the coastal area but she said it also had a lot to do with her party’s get-out-the-vote and vote-by-mail efforts.
“We did better than would have been anticipated based on straight registration, so that’s very good and shows that the hard work of our precinct people is very good. ...
“We have some very hardworking precinct people in this area. I would attribute the turnout to that.”
Biden’s other two wins came in Democratic-leaning precincts that Clinton also won: 4044, the County Pocket, and 4074, another Delray precinct just north of the one where McCarty and Roy live. It includes a slice of the barrier island and many homes west of the Intracoastal.
But Biden lost in the coastal area’s third Democratic-leaning precinct, a precinct that Clinton won four years earlier.
Precinct 4002, in east Lantana and including Hypoluxo Island, was one of two precincts where Trump got more non-Republican votes than Biden got non-Democratic ones.
The precinct has 543 Democrats, 506 Republicans and 445 other voters but Trump won 546-539, meaning Trump picked up at least 40 non-Republican votes while Biden didn’t win as many votes as there were Democrats in the precinct.
“That is interesting,” Lantana Councilman Malcolm Balfour said when told of the results.
“In this neighborhood, there are many wealthy people,” Balfour surmised in trying to explain the vote. He also said that he lives in the precinct but isn’t among the wealthy. “And many prefer Trump’s economic policies to Biden’s.”
The other precinct where Trump picked up more crossover votes was 4004, the sole precinct for South Palm Beach. Its voter registration was 532 Republicans, 462 Democrats and 422 other-party voters, and Trump won 606-526, meaning he picked up at least 74 non-Republican votes to Biden’s minimum of 64 non-Democrats.
Noting that Trump won South Palm Beach in 2016 as well, Mayor Bonnie Fischer said that based on her conversations with council members preceding her, “I had been assumptive there was more of a Democratic slant to our town and I was very surprised in 2016 when people supported Trump. ... Now I guess it’s happened twice. The population of our town seems to be changing.”
The other 13 precincts Trump won in The Coastal Star distribution area also were all Republican-leaning and consist of five in Boca Raton, two in Highland Beach, and one in each of Delray Beach, Gulf Stream, Boynton Beach, Briny Breezes, Ocean Ridge and Manalapan.

Biden outpaced Clinton
Overall, Biden did only slightly better than Clinton in the area’s 20 precincts. He won five precincts to her three. His margin of loss to Trump was 8.5 percentage points, whereas Clinton’s margin of loss was 9.6 percentage points.
And Biden received 10,010 votes to Clinton’s 8,190, an improvement of 22.2%, slightly better than Trump’s improved vote total of 19.1%. The increase for both Biden and Trump reflects the 18.3% increase in ballots cast in 2020 over 2016 as well as the fact that far fewer votes, less than half, went to third-party candidates in 2020 than did in 2016.
But Trump’s improvement was more significant than Biden’s in the countywide vote. Trump received 28.7% more votes in Palm Beach County than he did in 2016, whereas Biden’s county performance was just 15.7% better than Clinton’s.
A few political observers, Fox of Boca Raton and Balfour of Lantana, noted the vote preceded the Jan. 6 assault on the U.S. Capitol, implying that people might vote differently if the election were held today.
“I myself am an independent voter who has voted for Democrats and Republicans,” Fox said. Regarding Trump, he said, “I voted for him, but I really didn’t vote for him. I voted for the policies of the Republican Party. ... But I was not terribly disappointed with the results of the election.”
Asked whom she voted for, McCarty said, “I voted for Donald Trump. I’m not for open borders.”
On Dec. 23, in between the election and the events of Jan. 6, McCarty was one of 26 people who received full pardons from Trump for their convictions. Asked if she had experienced any second thoughts about her vote for Trump in light of recent events, she said, “Why would I? I’m a policy voter.”