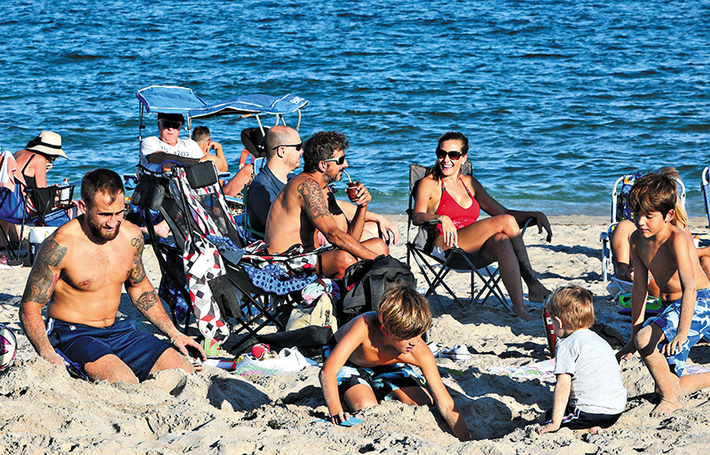 International tourism took off in November after the U.S. reopened borders to fully vaccinated travelers. Leonardo Sanchez sips a mate tea on Delray Beach’s municipal beach while soaking up the sun among a group of family and friends from Argentina. One of them, Alberto Palmetta (left), is a professional boxer. Photos by Tim Stepien/The Coastal Star

They’re back — the flocks of tourists that give the state its reputation as a winter habitat for snowbirds.
But this year, they might be known as the early migrators. They showed up at least six months ahead of the traditional schedule.
“We had the strongest summer on record since recorded time,” said Troy McLellan, president and CEO of the Boca Raton Chamber of Commerce.
He was near giddy about the positive numbers coming from all the agencies and industry watchers who count occupied beds, restaurant reservations and train riders. Tickets to events and venues also figure in.
Those numbers translate into much-needed tourism dollars — a large part of the county economy, with more than $7 billion in play annually from visitors in pre-pandemic years, according to the county’s Tourist Development Council.
“Commerce continues to happen. The GM of Town Center mall reports stores are bustling. Restaurants are on waits [for seating]. But the flip side is having workers,” McLellan said. The challenge remains finding the labor to service the tourists, he said.
The problem started early in the pandemic, he said, as hospitality industry workers and hourly laborers started assessing their careers after their bosses closed the doors to the public. Many who were let go decided to go back to school or to switch careers for less demanding hours and the uncertain pay of tip-based earnings.
Cooks, servers and hotel housekeepers are still in big demand. Restaurants have adjusted with shorter hours or fewer tables seated. Pay scales have increased for retail and hotel workers, and often companies have thrown in hiring bonuses.
But, McLellan said, “The business of hotel, restaurants and retail is doing well.”
After shutting down completely in March 2020, Florida became one of the first states to reopen its hotels, restaurants and transportation. Once airlines got back up to speed, and later cruises began sailing, South Florida became the “at last we can travel” resort destination.
“We had the highest bed tax collections in August on record,” McLellan said. “It means people are traveling again.”
Discover The Palm Beaches, the marketing agency that collects data on visitors to the county, provided statistics showing spring and summer had record numbers of leisure travelers in April, May, June and July — surpassing 2019’s boom year.
In November, after a year and a half of restrictions, the U.S. opened its borders again, allowing in international tourists who showed proof of vaccination.
Europeans came back, sometimes to reunite with families; Canadian tourists and snowbirds arrived, and some from South America came north for their annual holiday shopping, with favorable exchange rates in place.
The year ended with the county hosting about 7.8 million visitors, just shy of the pre-pandemic record-breaking 2019 year, according to Discover The Palm Beaches.
Eau Palm Beach Resort & Spa, the beachfront resort in Manalapan, is experiencing a strong demand for bookings, both suite and premium rooms, according to Michelle Phillips, marketing director.
“Indicators suggest that we could return to pre-pandemic levels sometime in late 2022 once the corporate group and social/wedding business bounces back entirely,” she said.
Group functions, including large conventions and big weddings, were canceled because of the pandemic. Smaller gatherings, most outdoors, have taken their place.
Phillips noted that Florida’s open spaces and warm weather conducive to outdoor events are drawing customers. 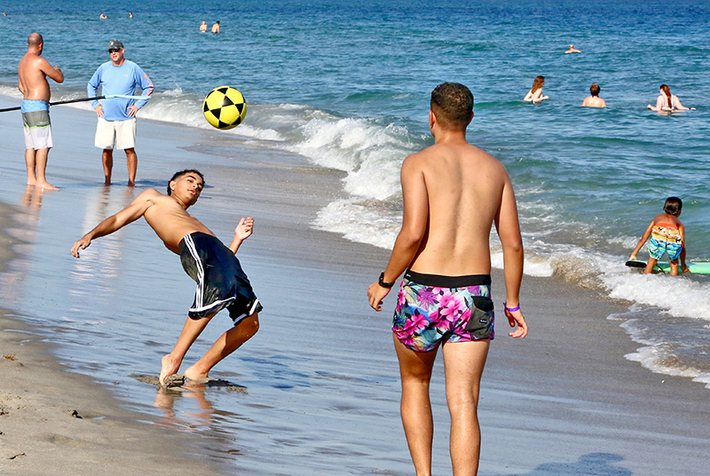 Season started early
The county’s marketing program, touting 39 unique cities and towns plus 47 miles of “unspoiled beachfront,” reaches the Northeast U.S. and spreads throughout eastern Canada. Now that borders have reopened, Canadians are coming down by car and in motor homes, or renting favorite efficiency hotels for lengthy stays.
At the Del-Raton RV Park in Delray Beach, owner Art Parsons says his spots have been booked out for months. “We’re very busy. We have our seasonal regulars, but a lot of newcomers. There are a lot of RVs on the road.”
He’s owned the park for 48 years, and many people who rent space for months at a time reserve the same spot each year. His visitors include those from Ohio, Pennsylvania and Georgia, but none in 2021 from Canada. “Canadians got a late start,” he said. “We were all booked up by the time they hit the road. A lot of them are going to Pompano and Hollywood.”
At Benny’s on the Beach on the Lake Worth pier, the Canadians are back full force, according to chef/partner Jeremy Hanlon. “Oh yeah, as of mid-December, it’s like a ship pulled up to Palm Beach County. All the Quebec tags. We have several regulars and they were really pumped to be back. They’re so happy to be able to travel.”
A lot of new residents are filling seats too, he said. “It’s the mainstay of conversation: ‘I just moved down and I’ve never been here before.’”
But finding help to run the dining room is a challenge, Hanlon said. “We get people who are looking for a job, but who don’t want to work. We’ll interview and welcome them, then they don’t show up. That’s when management steps up” to do extra work.
John Calormis of the Dune Deck Cafe in Lantana says his seasonal Canadian regulars as well as newcomers have been coming in for “a while.”
Diners still appear to prefer outdoor seating as safer, so the Dune Deck, which is entirely al fresco, has a built-in edge on restaurants that don’t have as much outdoors.
The business is a godsend after the beach was closed and the restaurant completely out of service for months in 2020. “It was tough,” Calormis said.
The increased number of visitors so early has been obvious to people trying to get into restaurants and finding out they have to wait.
Jeremy Bearman, chef/owner of Oceano Kitchen on Ocean Avenue in Lantana, says he’s seeing really big numbers. “Season doesn’t usually start for us till January. This year, it began in September and hasn’t stopped.”
Several factors contributed, he said, with “Florida being open” the main one. “Obviously, you see it on the roads. Traffic has never been worse.”
He’s also seeing a lot of new residents — ones who came to visit and decided to stay. “We hear it every day in the restaurant: ‘Yeah, I just bought a house down here.’ I don’t know if it’s their primary residence or a second home. But a lot of people are talking about moving here.”
His small casual eatery is doing so much business, he said, he’s working on expanding to accommodate more diners. “We really need a bar, and more seating. In season, we’re on a 11/2- to 2-hour wait. Our regulars who support us year-round can’t get in. It’s frustrating.”
He is trying to work things out with his landlord and the town, which he said “has been very supportive and helpful.”
“We want to stay on the Avenue.”
Overall, he said, “We’re very thankful to have all good opportunities. Being a small restaurant, we were able to pivot and stay open and do well.”
Many restaurants changed because of COVID, especially adding outdoor seating to assuage diners who did not want to be in confined spaces with strangers. Dozens added patios, and cities loosened restrictions on sidewalk seating and allowed canopies. The Kapow Noodle Bar in Mizner Park was among restaurants that took advantage of this and moved more outdoors.

Transit bouncing back
Another indicator of the comeback is public transportation. Steven Abrams, executive director of the South Florida Regional Transportation Authority, which operates Tri-Rail, said ridership on the commuter railway is booming.
“We are second in the nation behind Denver for commuter rails coming back to ridership,” he said. “We’re at approximately 70% of pre-COVID figures.” The rail is transporting about 15,000 riders a day, he said.
In contrast, he said, ridership on commuter trains in New York and New Jersey is at just 20% of pre-COVID numbers.
Tri-Rail connects to all three airports in South Florida, giving tourists inexpensive rides to and from their destinations. Connecting rides via free coaches in Fort Lauderdale and city buses in Miami and West Palm Beach, as well as cars for hire, make it easier to get around the area without a car.
“West Palm is now the highest ridership station in the county,” Abrams said. Boca Raton used to be, but that was when offices there were full of on-site staffers who now work remotely.
Visitors also take Tri-Rail to visit attractions and shop in other cities; with its proximity to the Kravis Center in West Palm Beach and the downtown area, tourists who want to see a performance can take the train back and forth.
Sports venues in Miami are accessible via rail, eliminating long car trips and parking costs, Abrams said.
Tourists and residents alike are finding plenty of attractions open as well, and the Boca Museum of Art has record-breaking figures in the books for November, according to Jim May, deputy director of communications.
He points to the international premiere of the exhibit Machu Picchu and the Golden Empires of Peru as one of the biggest draws for the museum. It opened in October and runs through early March.
“A year ago, there were 750 visitors for the month of November. We had 10,000 this year. The year before COVID, we did 2,600 in November,” May said.
The county’s Tourist Development Council is a sponsor of the exhibit, which has drawn visitors from other parts of Florida, particularly Miami-Dade and Broward counties. It was planned to open after hurricane season and on the cusp of the traditional tourist season opening; it exceeded expectations.
“Our membership is breaking records, and while most of that is local, we’re getting a lot of new people from all over. Sales in the museum shop are up significantly as well,” May said.
While there are no guarantees with the coronavirus surging again and the especially contagious omicron variant taking hold, Discover The Palm Beaches is bullish on 2022.
Figures on bookings for the new year have the experts predicting record-breaking numbers in high season — January through March — and overall to be 10% to 11% higher than 2021. That translates to 8.5 million tourists visiting Palm Beach County.