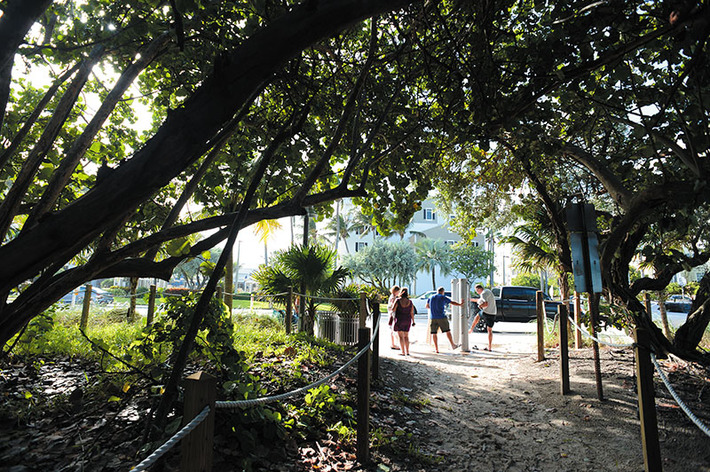 Beachgoers rinse their feet near the sea grapes that form a canopy along the shore in Delray Beach. Jerry Lower/The Coastal Star

Consensus emerges that
trims are better for dunes

When it comes to managing sea grapes at the beach, what’s an environmentalist to do?
Should the growing trees and shrubs be left alone to provide a friendly habitat for birds and small animals and shield the beach from man-made light that can disorient sea turtle hatchlings?
Or should the sea grapes be trimmed to stop them from crowding out other plants and allow for a far more diverse beach ecosystem?
In September, Delray Beach commissioners voted 3-2 to cut away, approving a plan to slash some remaining untouched sea grapes — five arbors up to 20 feet tall — to a height of 4 feet. These sea grapes were spared this summer during an extensive trimming at the beach, where they form canopies that create green tunnel pathways for beachgoers.
Nearby residents, whose views of the ocean have been blocked by the tall sea grapes, complained the tunnels are dangerous, house homeless people and should be cut back.
Others see the beach’s sea grape archways as iconic, creating a more natural look that should be preserved.
Leaving the conflicting aesthetics debate aside, many coastal experts say the city is moving in the right direction from an environmental viewpoint. 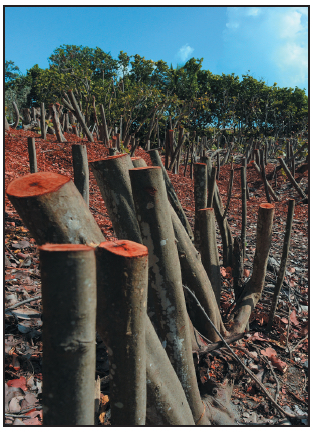 Some residents were upset in May when sea grapes were trimmed from tree height to waist high. They have since resprouted leaves.

Explosive growth
“You have this one species that is exploding, and it outcompetes and kills everything underneath it,” said George Gann, the chief conservation strategist for the Institute for Regional Conservation based in Delray Beach. “The sea grapes have not only grown up, they’ve also grown out. They’re overwhelming so much of the biodiversity on the dune.”
Gann compliments past dune restoration work at the city’s public beach, saying it is “one of the most biodiverse and successful beaches in Southeast Florida.” But, he cautions, “the sea grapes threaten the good work that has come before.”
In addition, Gann and coastal management consultant Rob Barron said the sea grapes have brittle wood and shallow root systems, increasing the chances they could blow over or become projectiles in a major hurricane. They’re also not great at capturing sand or providing erosion resistance, Gann and Barron said.
At the Florida Department of Environmental Protection, Dave Kieckbusch says you can trim or not trim in environmentally friendly ways depending on your preference. But the sea grapes are invasive, he said. Even though they are native, they can grow prolifically and potentially harmfully.
“You plant the sea grapes, they’re very nice looking, but they’re very fast-growing and they can shade out the [other] native plants,” said Kieckbusch, an environmental specialist who serves as the department’s field inspector for Southeast Florida.

Clusters of sea grapes dwarf all other vegetation in some areas, creating a monoculture.

Sea turtle concerns
One of the main environmental arguments against trimming is that the taller sea grapes shield the beach from artificial light emanating from buildings along State Road A1A, light that could disorient sea turtle hatchlings and discourage female sea turtles from nesting. Kieckbusch said trimming permits require lighting surveys before and after the work is done to assure light along A1A won’t get to the beach during nesting season.
Even a February consulting report prepared for the city — one that recommended leaving the remaining tall sea grapes untrimmed — said “the ultimate solution is for upland homes and buildings to comply with the city’s lighting ordinance and install turtle-friendly lighting.”
It took until 2017 for the significant light issues immediately north and south of Atlantic Avenue to be resolved to protect sea turtles and hatchlings, making it possible to do the remaining trimming that has now been approved, Barron said. He has been involved with the city’s beach management for decades and was a leading proponent of the trimming.
For Kieckbusch, a big environmental problem along the coast is private property owners who trim illegally and expose the beach to artificial light sources.
“This is starting with the snowbirds coming down. This is our busy time of the year” for permitting and enforcement, Kieckbusch said.

Shadows on the beach
From a sea turtle’s perspective at the municipal beach, Barron said the taller sea grapes don’t make a difference. Delray Beach’s sandy dunes themselves block out lighting that’s lower than the tops of telephone poles, he said.
But David Anderson, the sea turtle conservation coordinator at the Gumbo Limbo Nature Center in Boca Raton, doesn’t dismiss the benefits of taller sea grapes — even if direct light sources aren’t an issue.
Tall sea grapes not only shield the beach from light along A1A, but also can help block out the ambient glow created by light from cities to the west, Anderson said. To the extent sea grapes cast a shadow on the beach from the ambient light in the night sky, they provide darker spots that will attract nesting sea turtles, he said.
“Those turtles are just offshore, sticking their head out of the water, looking for a dark beach,” he said.
The narrower strip of beach next to Red Reef Park in Boca Raton, for example, next to high dunes and with shading from tall sea grapes, has made nesting density greater there, Anderson said. In the same way, tall beachfront condos with turtle-friendly lighting actually have a beneficial effect, attracting nesting sea turtles by casting shadows that block the ambient light, he said. 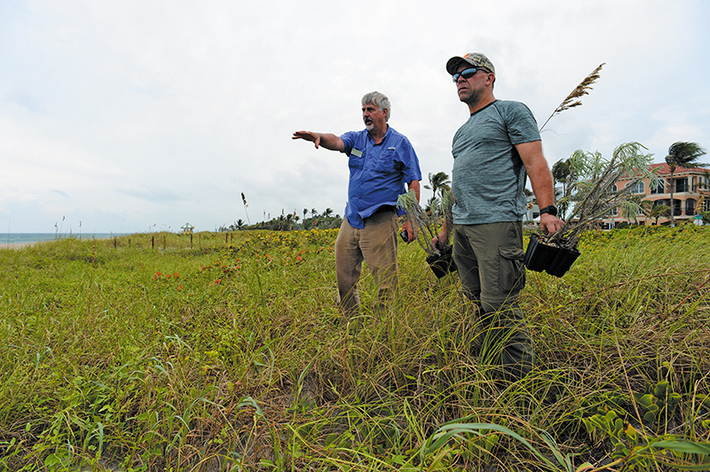 George Gann of the Institute for Regional Conservation works with Keith Buttry of Neglected Plants LLC to plant sea lavender in a more diverse stretch of the Delray Beach dune. Photos by Jerry Lower/The Coastal Star

Delray’s sea grape history
Sea grape plants are native to Florida, but historically hadn’t been a significant part of the region’s beach dune system, which was full of grasses and saw palmettos, Barron said.
In the early 1970s, beach erosion had ocean water lapping near the edge of A1A, prompting the city to do a beach-widening project, Barron said. When blowing sand from the new beach caused problems of its own, the city initially rejected a proposal to plant sea oats — an idea derided at the time as “hayfields on the beach,” he said.
Sea oats, which conservationists say are one of the most effective beach plants at trapping sand and building up dunes, were eventually planted in the mid-1980s and are now a significant part of the beach’s foredune.
The sea grapes west of the oats, between the foredune and the sidewalk, were planted earlier in the 1980s and started thriving after the sea oats were introduced, Barron said. They doubled their footprint about every nine years and quickly overtook the community of plants in the coastal strand portion of the city’s beach ecosystem, he said.
Gann wants to see numerous plant species returned to the beach’s coastal strand once the sea grapes are trimmed and the exotic vegetation removed. That will create a habitat for dozens of species of butterflies and birds and rejuvenate the natural ecosystem, he said.
At the end of October, the city began adding new native vegetation following the trimming and the removal of exotics done during the summer. The plantings include bay cedar, golden beach creeper, Walter’s ground cherry and sea lavender.
Some argue the sea grape trees near A1A provide a fertile habitat for small mammals and migratory birds, but Gann said there’s not much place for the mammals to hide and the sea grape fruit is attractive only to larger birds, such as blue jays. Trees are typically part of a maritime hammock to the west of the coastal strand. But that type of hammock, which is in place at the city’s Atlantic Dunes Park, is not present at the municipal beach.
Gann compared the sea grapes at the beach to cattails in the Everglades.
Just as the cattail population explodes as a result of nutrient-rich agricultural runoff flowing into the Everglades, the sea grapes take advantage of excess nutrients near the beach to proliferate out of control, he said.
“In hindsight, it would have been a lot better to plant other things,” he said.