Winds from the east this summer have pushed a nearly constant supply of sargassum onto the beach, challenging beachgoers like Debby Belmonte of Ocean Ridge. Jerry Lower/The Coastal Star

Rotting seaweed piles along South Florida’s coast can ruin a perfectly good day at the beach and foul the breeze reaching nearby homes and condos. At night, large sargassum wracks can ensnare sea turtle hatchlings struggling to reach the ocean.
But out at sea, the sargassum is a floating buffet and camouflage for baby sea turtles and other marine species, providing sustenance and protection from predators. And on shore, it can trap sand and fortify eroding coastlines. It can even be recycled into fertilizer.
Good or bad, benefit or nuisance, the seasonal inundation on South Palm Beach County beaches is here to stay, scientists say.
“In the past seven years, starting from 2015, the waters around Southeast Florida experienced way more sargassum than before 2015. This is likely going to continue in future years,” said Professor Chuanmin Hu, an optical oceanographer at the University of South Florida in Tampa.
It’s not only a local issue. Florida Atlantic University researchers have concluded the large increases in sargassum in the tropical Atlantic Ocean, forming the Great Atlantic Sargassum Belt, are fed by vast amounts of nitrogen and phosphorus pouring into the ocean from the Amazon, Congo and Mississippi rivers, often resulting from deforestation and the rise of agriculture.
The nutrients also are carried in the wind on grains of sand from the Sahara Desert and from biomass burning of vegetation in Africa, according to a 2021 FAU study.
“We saw very clearly in our data that these plants respond to increasing nitrate and phosphate, particularly when they’re combined together,” said the study’s lead author, FAU Professor Brian Lapointe of the Harbor Branch Oceanographic Institute. The whole North Atlantic basin is being affected by major river plumes and atmospheric deposits, he said.
The brown sargassum reaching Palm Beach County passes through the Caribbean Sea first, where significant increases have been reported since 2011, leading to “mountains” of sargassum landing on island beaches there, Hu said. Some of the sargassum from the Caribbean travels to the Gulf of Mexico, the Florida Straits and north along the Gulf Stream — where a strong easterly wind and local tidal conditions can send it to Florida shores, Hu says.
“The past few years represents a new normal for future years, but every year will fluctuate. It could be higher or lower, but it will never reach the level we see in the Caribbean Sea,” Hu said of sargassum’s impact on the Southeast Florida coastline. “An individual beach may have a completely different story. … An individual beach may have more sargassum, even major sargassum, simply because of winds and tides. That’s a huge variable.”

A swath of sargassum 20 feet wide and knee-deep coats the beach south of the Boca Raton Inlet on Aug. 26. Tim Stepien/The Coastal Star

Tides of seaweed
Clayton Peart experiences the impact in south Palm Beach County, where the Gulf Stream’s proximity to land is at its closest, on almost a daily basis. His family owns Universal Beach Services, a Delray Beach company that contracts with condos and homeowners to clean the beaches in front of their properties.
One thing that has drawn Peart’s attention as he cleans beaches this year is just the magnitude of the large patches of sargassum offshore.
“It seems like islands of seaweed washing in,” Peart said. The frequency of sargassum landing on the beaches rose dramatically this year, he said.
“The normal conditions are three weeks off and then two or three days of bad seaweed,” Peart said. This year, the situation flipped, he said: “The seaweed is bad for two or three weeks, and then there’s a break for three days.”
Fortunately, the sargassum amounts are lessening as fall approaches. Heavy inundations should not be seen again until the spring. But even that is a change from the past.
Hu said that although 2022 doesn’t appear to have dumped the most sargassum on the Florida coast, the sargassum presence expanded, showing up as early as April, in the heart of tourist season, when the beaches are most crowded.
“The amount of sargassum is not the highest we’ve seen, but the duration is the longest,” Hu said. “Usually, the Southeast Florida coast did not experience large amounts of sargassum except in June and July, you know, two months, or sometimes May to June.”
The sargassum piles are particularly noticeable on the south side of jetties at the Lake Worth Inlet, the Boynton Inlet and the Boca Inlet, trapped after being pushed there by southeasterly winds.
“We have seen massive amounts, for example, accumulate on the south jetty at Fort Pierce Inlet, very similar to what has happened in the town of Palm Beach this summer. It can catch on the jetties, right, and accumulate and begin to rot and stink,” Lapointe said. “Those areas are becoming problematic, releasing a lot of toxic hydrogen sulfide gas that is a health issue at very low concentrations.”

Hatchling obstacle
The heaviest time for the sargassum reaching south Palm Beach County overlaps the sea turtle nesting season, posing potential problems for hatchling turtles.
A study by a Florida Atlantic University graduate student published in the Journal of Coastal Research this year said sargassum accumulations in 2020 “may have caused as much as a 22% decline in net hatchling production in Boca Raton.”
The study by Joshua P. Schiariti and Michael Salmon, an FAU professor, at one point looked at 101 hatchlings trying to reach the ocean and found decreasing levels of success as the height of the sargassum barriers increased. None of 16 hatchlings coming upon a sargassum wrack that was a foot or more high was able to cross it, the study reported.
Although it is a potential threat to hatchlings, the sargassum hasn’t stopped near records of loggerheads and other nesting sea turtles from coming ashore this year to lay their eggs. “They plow right through it getting to the beach,” said David Anderson, the sea turtle conservation coordinator at Gumbo Limbo Nature Center in Boca Raton.
“The biggest impact we have seen, because of the large amounts of sargassum, is hatchlings struggling to get to the high tide line,” Anderson said. “We have a lot of people wave us down on the beach where hatchlings are stuck in the sargassum.”
City and private crews hired to clean the beaches and bury the sargassum aren’t allowed to work until crews surveying the beach for turtle nests and wayward hatchlings give an all-clear. Peart said in early August that there were a couple of weeks when he had lengthy delays in his morning work schedule because of heightened concern about trapped hatchlings.
“The turtle people were requesting I come to work later, to make sure all the hatchlings were out,” Peart said. That meant instead of cleaning the beaches between sunrise and mid-morning, he couldn’t get started sometimes until closer to lunchtime, he said. The county has a hands-off policy for sargassum at its parks such as Ocean Inlet (above). Tim Stepien/The Coastal Star

Can’t you smell that smell?
Hatchlings aren’t the only ones affected by the decomposing sargassum — it bothers people, too.
Sargassum, by itself, isn’t toxic like red tide, an algal bloom that has been a particular problem on Florida’s Gulf Coast, Hu said. However, the hydrogen sulfide it emits while decaying can cause health issues for people breathing it in.
“Under Florida sunshine, after a couple of days, the sargassum plant gets rotten and smells very bad, like a rotten egg,” Hu said, especially when it’s in huge amounts. “It’s not good, maybe it’s harmful to your health, especially if you have breathing problems, asthma.”
And the sheer volume of the sargassum at sea is turning its presence from a vibrant living organism into a toxic “dead zone,” according to Lapointe’s study published in Nature Communications. It suggested the increased nitrogen availability is turning the critical nursery habitat for marine life into harmful algal blooms having severe impacts on coastal ecosystems and human health.

Keeping beaches clean
To handle the wrack locally, most beach cleaning in south Palm Beach County is done by private contractors because many towns don’t have a public beach to clean. The larger cities, including Boca Raton and Delray Beach, take care of their own public beaches.
Unlike Fort Lauderdale, which collects and composts its sargassum for use as a soil supplement, the private contractors and local communities here generally bury the seaweed at the beach. “I incorporate it into the dune system,” Peart said.
They must follow strict rules during the turtle nesting season, which runs from March through October, to ensure protection of sea turtle nests and hatchlings.
“We have two teams using a process where groundskeepers in a utility vehicle move forward to clear large debris and trash from the seaweed. As the groundskeepers advance, a tractor is brought in behind to dig a hole where needed and seaweed is pushed into the hole and buried,” Boca Raton spokeswoman Anne Marie Connolly said in an email to The Coastal Star.
“Cleaning is also limited to the last high tide line and our tractors are not permitted to clean the upper beach or dune line,” Connolly said. “The beach is cleaned daily, though at times we are hindered by an overwhelming amount of seaweed that is occasionally deposited during the change in tides or an occasional equipment issue.”
Palm Beach County takes a hands-off approach to the sargassum, because of the beneficial impacts it can have on beaches. That policy is in effect at county-owned beaches, including Ocean Inlet Park, Gulfstream Park, Hammock Park and South Inlet Park in South County.
“The county’s standard practice is to leave accumulation in place as it represents a critical part of the beach ecosystem providing food and shelter for wildlife, and nutrients and stability to sensitive dune habitat,” Andy Studt, the county’s program director for coastal resources management, said in an email to The Coastal Star.
“If necessary, Parks staff will work to clear open pathways through the sand down to the water for beachgoers at county-owned parks,” Studt said. 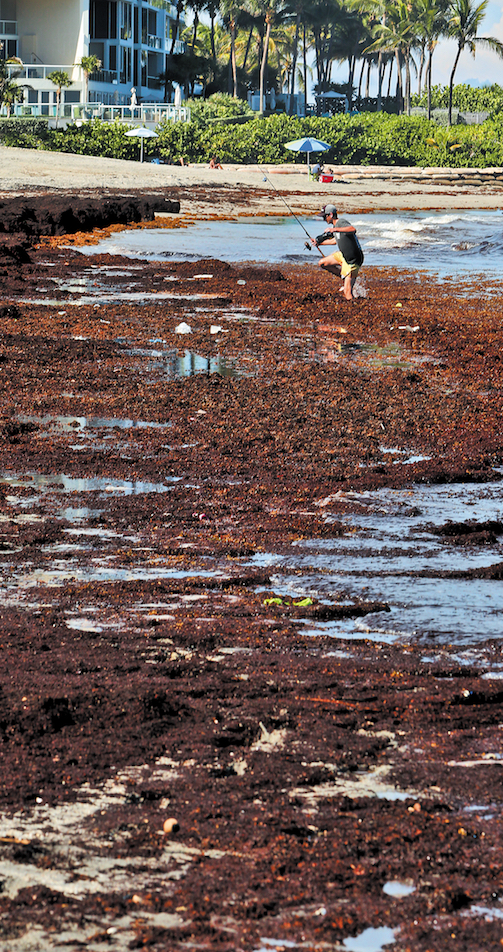 Adrian Guarniere, 17, a senior at Boca Raton High, wades through dense, floating sargassum on his way back to the beach on Aug. 26. He’d been fishing with a friend at South Beach Park. Tim Stepien/The Coastal Star