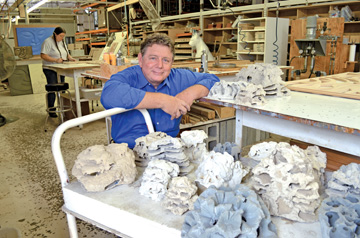 Christopher O’Hare first started worrying about the fish in Lake Worth Lagoon when he moved to Ocean Ridge in 1992 and saw the sea walls that had replaced the native mangroves that grew at water’s edge.
“Mangroves provide ideal habitats for fish. It’s one of the big issues facing environmental management of Lake Worth Lagoon,” O’Hare said.
The mangrove’s long, tangled roots reach through shallow water, creating crucial nursery areas for fish and shellfish, as well as food for a variety of marine life, including snook, snapper, tarpon, jack, oysters and shrimp.
Twenty years of research later, O’Hare, 58, has perfected his Reef Cells modules, intricately designed cast-stone (a concrete) artificial reefs.
His fourth reef, south of Phil Foster Park and the Blue Heron Bridge, was installed in August in 6 to 10 feet of crystal-clear water. Six of his reef modules — each 5 feet by 8 feet by 4 feet  and weighing 2 tons — were placed in a line of limestone boulders.
The 800-foot-long snorkel trail already is popular with divers — and fish.
O’Hare, a sculptor who now lives in Gulf Stream, is owner of Pineapple Grove Designs, which makes architectural art in cast stone for clients ranging from the Department of Defense to Notre Dame and Princeton universities.
It was natural for him to turn his experience with concrete and sculpture to underwater habitats for fish. His cast-stone reefs are a labyrinth of tunnels, half bowls, small and large cavities, and ledges that accommodate a wide variety of fish and mollusks.
“Fish are curious, and there were fish on the reef within a matter of four hours — a lot of lobster, snapper, snook, grunts, little blowfish, and parrotfish that nibble on the reef surface,” he said.
He studied marine life and habitats to determine the right materials for the reef, which he found to include silica sand and calcium carbonate, the same materials in seashells.
“It’s super-tough and will grow as coral attaches to it, and last as long as a natural reef,” O’Hare said.
Fish have vastly different house preferences, so there are no one-size-fits-all reefs.
“We had to find out what different species of fish require as far as shapes for that fish to survive. Sharks and barracudas are basically comfortable in the open ocean. Mollusks need a surface they can attach to, plus light and a water current to deliver food,” he said.
Goliath grouper, which are around 400 pounds when mature, would need a very large cavity to back into. Some fish like to have a back door — if there’s a threat they can escape.
“But a moray eel doesn’t want something to come from behind,” he said. “The general theory is to provide as much variety as possible and see what shows up.”
O’Hare’s first reef was the Firehock Memorial Reef, a tribute to firefighter Peter Firehock, founder of the Delray Beach Fire-Rescue Dive Team. Firehock was killed in December 2001 by a hit-and-run driver as he was bicycling in Boynton Beach. The second reef is in 30 feet of water due east of the Boynton Inlet, and the third is near the end of the pier on the northeast corner of Peanut Island.
O’Hare’s four artificial reefs were installed with the help of Jim Vance of Vance Construction, the chief marine contractor for Palm Beach County, and Carman Vare of the Palm Beach County Department of Environmental Resources Management. Paul Fitzgerald of Pinnacle Group International is planning to attach live corals to the Reef Cells to quicken colonization of the artificial reef.
“Everything we’ve done has been volunteered and donated,” O’Hare said. “We hope to teach people around the world how to build these habitats with materials they have at hand.” 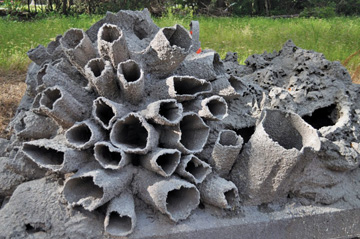 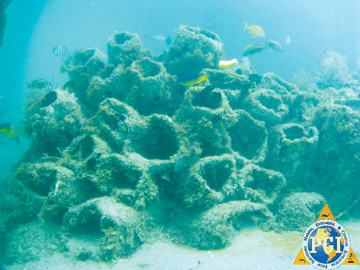 The artificial reef (left) was designed by O’Hare and placed near the Boynton Inlet. Six months later,  it is a thriving eco-system for marine life, at left.
Photos provided