SEPT. 15: On the morning of his release, a loggerhead turtle, named George Bush by his rescuers, swims in a holding tank at the Gumbo Limbo Nature Center. Jerry Lower/The Coastal Star

On the Friday after Hurricane Irma’s assault on Palm Beach County — a morning so wonderfully blue and breezy you almost needed those fallen trees to convince you it had really happened — a white Ford Explorer left the Gumbo Limbo Nature Center in Boca Raton and headed south to a private dock in Lighthouse Point.
Riding in the back was a 206-pound loggerhead turtle named George Bush.
Compared with what that turtle had already been through, it turned out the hurricane wasn’t that big a deal to him.

Nearly four months earlier, about 8 o’clock on Sunday morning, May 28, two paddle-boarders had been resting maybe 300 yards off Delray Beach, when a stranger joined them.
Will Vacha and Bryan Rydzewski are old friends and ardent oceangoers.
“The north end of Delray Beach is our home,” Vacha recalled. “We were just sitting on our boards talking when this turtle came up to us and surfaced and stayed there, checking us out.”
Vacha spotted a trail of blue fishing line dangling from the turtle’s left front flipper. They had no tools, but using the key to Vacha’s truck, Rydzewski was able to cut some of the line free.
The turtle sank to the ocean floor and stayed there.
“He’s pretty weak,” Rydzewski told Vacha. “He’s probably not going to move and eventually he’ll be prey to something bigger.”
Rydzewski adjusted his goggles, swam down and helped the turtle to the surface once more. As they debated what to do, Vacha spotted two jet skiers approaching. A pair of pliers was offered and still more line removed.
Now Vacha and Rydzewski tried to lift the turtle onto a paddleboard.
“Not knowing much about sea turtles, I was impressed that he wasn’t aggressive at all,” Vacha said.
After failing to get the turtle to ride the board, Rydzewski decided they should swim him to shore. As he pushed the turtle from behind, Vacha paddled alongside.
“He’s not fighting me at all,” Rydzewski said.
“We would rest every couple of feet, but at no point did it seem he was trying to get away,” Vacha recalled. “He was very cooperative.”
On shore they flagged down Sgt. Bernard O’Donnell of the Gulf Stream Police Department, patrolling on his ATV. Joan Lorne, a longtime volunteer turtle monitor, happened by and called for help.
“While we were waiting, we were able to really look at the damage done,” Vacha said, “and it wasn’t just a single line. A steel cable had wrapped itself around his armpit, basically.”
Whitney Crowder, the turtle rehabilitation coordinator at Gumbo Limbo, was home in Boca Raton when the call came. She and her husband, Andrew, a marine biologist, drove up to Delray Beach. They loaded the loggerhead into the back of O’Donnell’s four-wheel ATV and went as far as the Sandoway Discovery Center, where they transferred the turtle to Crowder’s Toyota.
Caitlin Bovery, also a rehab coordinator, met them in the Gumbo Limbo parking lot. The turtle was lifted onto a gurney and wheeled into the rehabilitation area. Dr. Maria Chadam, the center’s primary veterinarian for the past six years, was on the way.
The badly injured turtle had no name at that point. But he had been rescued almost directly off George Bush Boulevard. 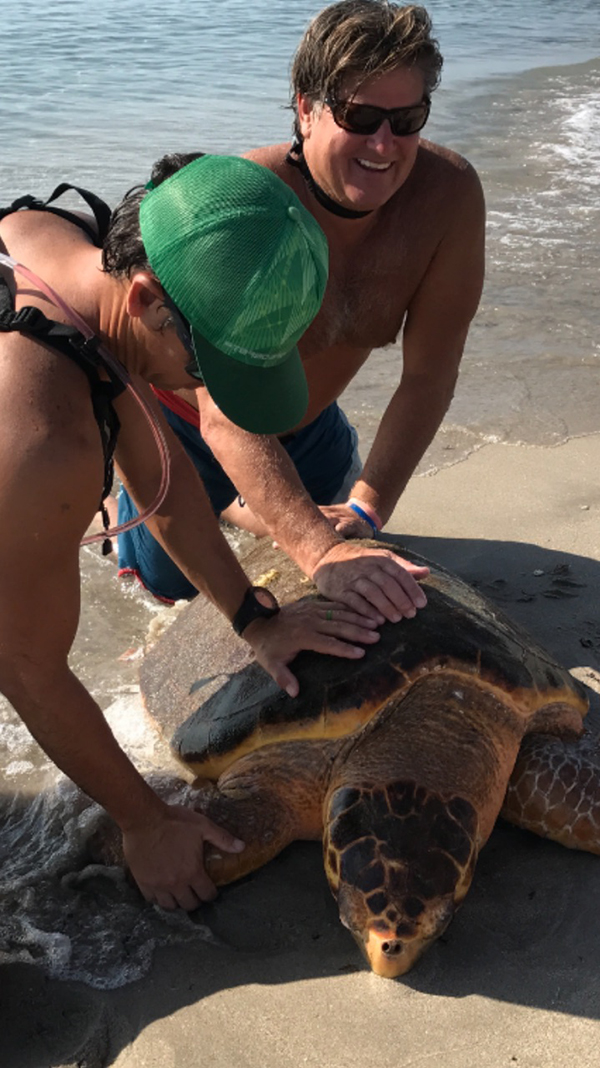 MAY 28: Will Vacha and Bryan Rydzewski coax the loggerhead to the beach so others can deal with his injured flipper. Photo provided by Joan Lorne 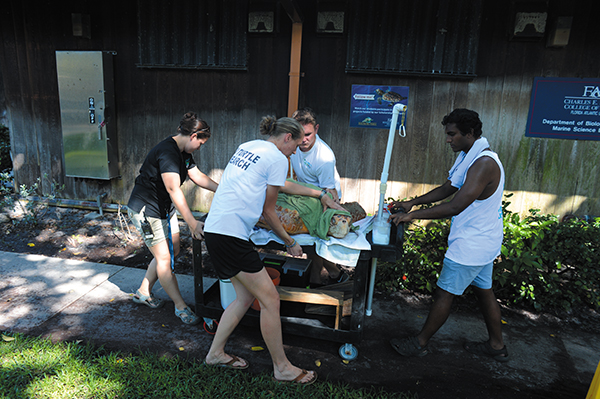 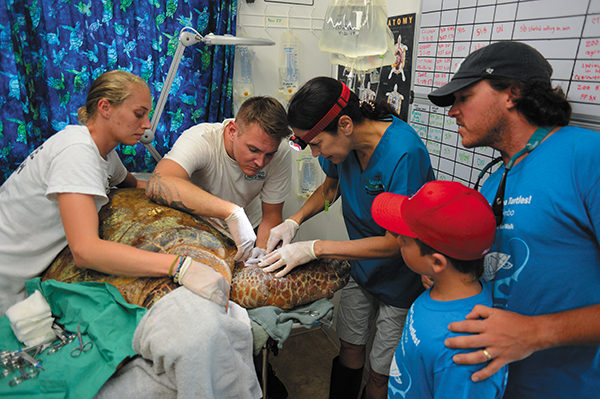 When George Bush arrived at Gumbo Limbo, he weighed 190 pounds and was estimated to be about 20 years old, a young adult. A healthy loggerhead can live to be 80.
The admittance notes said, “Lethargic. Severe entanglement around left shoulder. Prognosis on flipper poor.”
An X-ray of the left flipper found no broken bones, and Chadam was able to remove all the fishing line, but the deep cuts had become infected.
“This is a very lucky turtle,” Crowder reported a day or two later. “If we didn’t get him in when we did, he would definitely have lost his flipper.”
She spoke too soon.
By Tuesday, June 6, about 75 percent of the flipper had become infected and a wound culture found a flesh-eating bacteria attacking it.
The turtle was transferred to the Palm Beach Zoo, where Chadam performed a partial amputation, which took about an hour.
“A full amputation is a lot more invasive and difficult,” she explained. “We’re trying to save some part of his limb for help with steering, but we worry about the infection getting into the shoulder and bone and joint.”

Five weeks later, on July 11, he was back at the zoo for a second operation.
“The tissue had died off too much,” Chadam said.
The second operation, to remove the entire flipper and humerus bone, took two hours because a loggerhead’s muscles are so firmly attached, the tendons and ligaments so tough that cutting through them takes time.
“These guys are built like a pit bull,” Chadam said. “I must have dulled three scissors.”
George Bush was put under a general anesthetic and a tube was placed in his trachea, then attached to a breathing machine while the remaining flipper and bone were removed.
“He doesn’t like me too much now,” Chadam said when Bush was back in his tank and recuperating at Gumbo Limbo. “I’m the one who looks at his wounds and does things he doesn’t like. They’re not smart, but they’re instinctively intelligent.”
A turtle can navigate with only three flippers, she said. “But he may have trouble mating. They use their front flippers to hold on to the female.” 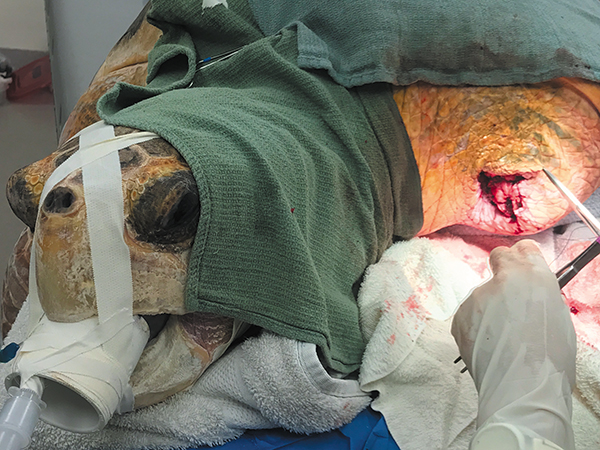 JULY 11: George Bush undergoes a second surgery, for a full amputation of the wounded flipper. The PVC pipe in his mouth protected the breathing machine tube that kept him going. Photo provided by Caitlin Bovery

On Friday, July 28, the sutures came out.
“He still has a bit to go with the healing process,” Chadam reported, “but he did eat one squid, so he’s feeling better.”
Through it all, George Bush was treated with antibiotics. His wounds were flushed with chlorhexidine, a disinfectant and antiseptic. Raw honey, a natural antibiotic, antimicrobial and antifungal, was applied.
Slowly he recovered. He ate. He began to move about his tank. He weighed 206 pounds now.
Finally, Chadam pronounced him well enough to go home. After nearly four months at the rehab center, George Bush would return to the sea on Friday, Sept. 15.
And then Hurricane Irma struck. 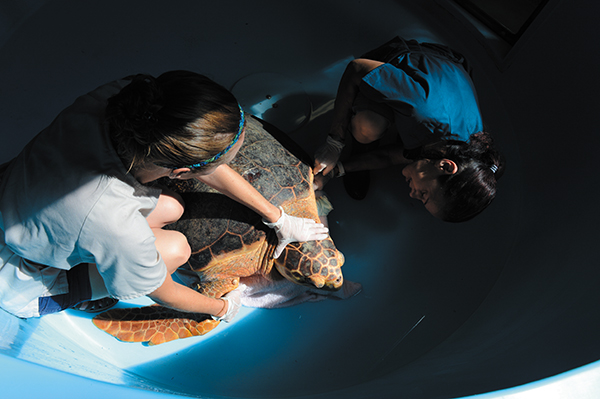 “The turtles are going to be evacuated,” Crowder announced. “It’s going to be exhausting.”
On Friday, Sept. 8, as residents wondered just where in Florida Irma would strike, the staff at Gumbo Limbo loaded up seven patients, including George Bush and a second loggerhead named Kraken, and drove them to the city’s Sugar Sand Park, well inland on Military Trail.
The smaller turtles were each placed in a tub in a large, windowless room. Nearby, a plywood corral was constructed for the two big loggerheads. A board down the middle kept them apart.
“We separate them because the males will kill each other,” Chadam said matter-of-factly. “They’re very mean.”
Gumbo Limbo survived without any major damage, and on Monday afternoon, George Bush and his fellow evacuees returned to the center.
Four days later, he was in the back of that Ford Explorer and on the way home.
He was not alone, however.
Following the Explorer was a white Ford minivan with thousands — thousands! — of hurricane refugees inside.

When Hurricane Irma struck, the waves off our coast were alive with hatchlings, newborn turtles, not 3 inches long, swimming like mad for the weed line, those thick islands of floating sargassum eight or 10 miles out.
The weeds mean safety. The brown algae provides a camouflage against predators. The tiny shrimp and crabs that lurk there provide a meal.
“It’s called washback,” Caitlin Bovery said. “When the hurricane struck, they all got kicked back onshore by the storm surge. The fact that they’re even alive now is amazing.”
After the storm, Gumbo Limbo got a call from the state Fish & Wildlife Conservation Commission. Dedicated volunteers from New Smyrna Beach to Boca Raton had been gathering the stranded hatchlings off their beaches. Could the center help these hurricane refugees finally reach the weed line?
The collected hatchings were delivered and inventoried, placed in 15 plastic bins and loaded into the minivan.
On that sparkling Friday morning after Irma, two Gumbo Limbo vans set out for Lighthouse Point, bearing 2,523 baby turtles and one big loggerhead with only three flippers.

Capt. Tom Campbell is a retired marine engineer with a 38-foot fishing boat called the Sand Dollar and an even bigger heart.
He is volunteering his boat today without charging Gumbo Limbo. He never does.
On board are Chadam, Whitney Crowder, Caitlin Bovery and the center’s rehab technicians Rebecca Mannen and Emily Mirowski, along with some family and friends.
The hatchling bins are stacked in the bow and George Bush at the stern, resting on a canvas tarp with straps for easy lifting.
“It’s super flat today,” Capt. Tom says as the Sand Dollar passes a 60-foot yacht that’s been tossed on its side by the storm.
Once through the inlet, he blasts the radio, The Beach 102.7, rock sounds loud enough to be heard above the engines.
The Sand Dollar bounds over the waves, then slows to a purr at the third reef out, a mile offshore.
At 11 a.m., Chadam,  Mirowski, Mannen and Capt. Tom’s friend Carmine Genovese each take a strap and lift George Bush to the side of the boat.
“One! Two! Three!” someone calls, and George Bush is gone, sliding into the murky water and disappearing beneath the waves without so much as a goodbye wave. 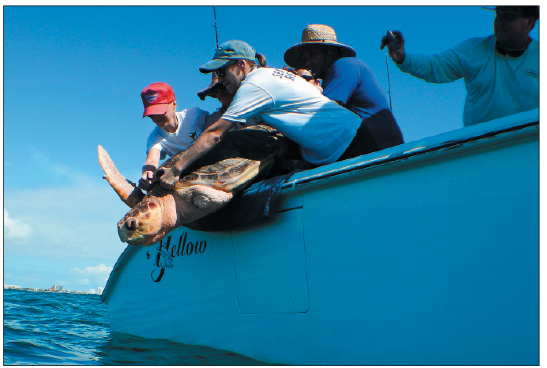 SEPT. 15: In 70 feet of water near a hospitable reef, George Bush is released over the side of Tom Campbell’s boat and is home again.| Video

A half-hour later, the boat is nearly 8 miles offshore. The tower of the Boca Raton Resort & Club is a tiny pink finger against the blue sky, and the sargassum is thick here.
Chadam, Bovery and a half dozen others leap into the sea and tread water as the bins are handed overboard, floating like small plastic lifeboats on the waves.
The rescuers gather round and place the hatchlings on the surface and watch them paddle frantically toward the weeds. Handful after handful until all 2,523 babies are in the water, in the weeds, home.
“That’s it!” And a cheer erupts.
They climb back aboard, and as Capt. Tom steers the Sand Dollar toward land, his radio starts blasting Celebration, by Kool & The Gang. 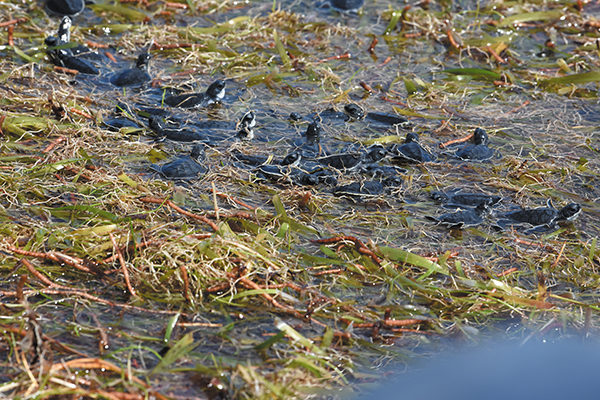 SEPT. 15: After the crew released loggerhead George Bush near shore for easy access to a safe reef, the boat traveled nearly 8 miles offshore from Boca Raton for the next release. These greens were among more than 2,500 turtle hatchlings released near mats of floating sargassum. Hatchlings naturally seek out sargassum for cover and food. Five of the seven species of sea turtles were represented in this release. Clockwise from the smallest one at top: loggerhead, hawksbill, green, Kemp’s ridley and leatherback. Photos by Jerry Lower/The Coastal Star

On the trip back to Lighthouse Point, Chadam sits at the stern in a floppy straw hat and dark sunglasses, watching in silence as the weed line shrinks in the distance.
What are the chances the hatchlings will make it, she is asked.
Well, she says, the experts estimate that only one out of every 1,000 sea turtles survives to adulthood.
Predators get them. Hurricanes get them. Blue fishing lines get them.
Of the 2,523 baby turtles they’ve just released, she says, only two or three will live to be as old as George Bush.