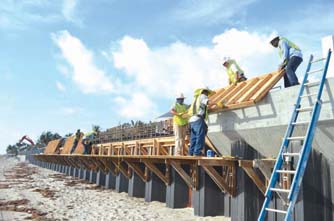 Workers prepare the concrete cap for replacement of one of many
seawalls damaged during Hurricane Sandy along the beach in Manalapan. 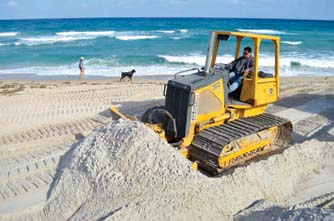 More than 150 truckloads of sand were hauled to the north end of Delray Beach. A massive project to pump in sand starts in March.

The U.S. Fish and Wildlife Service has asked for additional monitoring and reporting of wildlife, particularly sea turtles, since the Delray Beach beach renourishment project is scheduled to begin after turtle season’s start on March 1.

The additional tasks include shore bird monitoring, light monitoring at the dredge site on the beach, leatherback turtle monitoring from 9 p.m. until 6 a.m., nest relocation reporting and monitoring of the steep slope of cut off beach at the shoreline, called an escarpment. “We amended the opinion we did in September 2011 for the planned beach renourishment,” said Jeff Howe, biologist with the U.S. Fish and Wildlife Service in Vero Beach, who is working on the Delray Beach project. 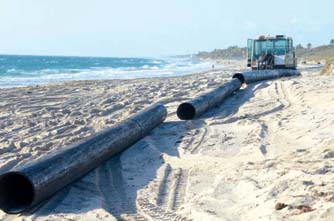 Sand dredged from the Boynton Inlet will flow through these pipes
to replenish Ocean Hammock Park in Ocean Ridge.

“We will have to do early morning sea turtle surveys,” he said, giving an example of turtle monitoring.

Additional tasks include extensive escarpment reporting with weekly surveys that will include mitigation for any escarpment exceeding 18 inches in height and 100 feet in length and submittal of annual summary reports for up to three years.

Increased lighting survey reporting and additional reproductive success reporting for each of the three turtle species also will be required.

In response to the additional monitoring tasks, John Fletemeyer, who will do the monitoring for the city, has requested more compensation to cover the added tasks in the amount of $12,600 in 2013 and $14,400 in 2014 to the existing yearly contract amount of $38,750. He asked the commission to authorize this amendment to the last two years of his three-year agreement for sea turtle monitoring through Oct. 31, 2014. 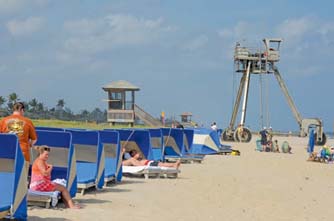 A 30-foot-tall tripod-like vehicle arrived on Delray’s beach to help
with survey efforts needed before sand can be pumped from the ocean floor.

A drop-off in turtle nesting might happen in the first year after dredging, but turtles will usually return the second year,” said Scott Pape, senior planner with the city of Delray Beach.

“You can’t predict what will happen, but we’ve experienced statewide a drop-off in turtle nesting in the first year after beach renourishment projects. I expect we will see a curve with the turtles coming back the second year,” he said.

The sand trucked into the dunes on the beach north of the city’s municipal beach was a response to the surge from Hurricane Sandy, he said, and not part of the long-range plan. For small dune projects such as that one, it is usual procedure to buy inland sand, he said.

The dune project won’t include the replacement of vegetation including sea oats lost in the storm, he said, adding that much of the vegetation is expected to grow back.

A convoy of trucks lined up on A1A Feb. 19 to deliver the 2,500 cubic yards of inland sand at a cost of $138,666 to the dunes to the north of the city’s beach as part of the city’s Emergency Dune/Beach Restoration Project, according to information released by the city. The city received a permit from the Florida Department of Environmental Project to use sand from a mine in Moore Haven, 90 miles from Delray Beach.

Funding for this project is expected to be included within the financing package to pay for the regularly scheduled dredge project.

The north beach is outside the routine 10-year renourishment plan. That $9.2 million project includes beaches that run from just north of Atlantic Avenue to 700 feet south of Linton Boulevard. More than 1 million cubic yards of sand will come from offshore dredging.

Beach property owners had asked the city to seek an emergency state permit to put additional sand north and south of the planned project because of sand loss in those areas and damage to the dunes.

There are no plans presently to bring sand to the beach south of the regularly planned renourishment.

The dredge that will be used offshore for the Delray Beach project is dredging the Port of Palm Beach and the Palm Beach Inlet. The red, 305-foot-long Texas is one of the world’s most powerful cutterhead dredges. The overall length of the big dredge with the idler barge is 594 feet, almost two football fields.

Richard Spadoni, executive director of Coastal Planning and Engineering in Boca Raton, the company that is directing the dredge work, said the dredge will move offshore Delray Beach around mid-to late-March with work continuing for about six weeks. Before dredging starts, pre-construction activity will include stockpiling of piping and other materials. The sand replacement will start near Atlantic Avenue and work south.

There are two miles of public beach in Delray Beach, and together the Atlantic Dunes Park and Delray Municipal Beach attract about 1 million visitors a year, a huge tourism draw, according to the Downtown Development Authority.

Sand is expected to be delivered in the first part of March. “It shouldn’t take long, at most 10 days, and the best case scenario is five or six days,” she said.

And, of course, storms may accelerate those schedules, like Sandy did for the north and central beaches, which are still recovering from Sandy.

“But we’re seeing sandbars offshore, and some of that sand will be coming back. And we look a lot better than beaches in other areas such as Fort Lauderdale,” she said.

At least part of the reason Boca’s beaches fared so well was the dunes. “We have such a great dune system, and that took a beating but that’s the dunes’ purpose,” she said.
Ocean Ridge’s beaches will get restoration next year. The Army Corps of Engineers approved the county’s assessment of damage at Ocean Ridge’s beach, according to Dan Bates, deputy director of Palm Beach County Environmental Resource Management.

Beach-compatible sand from the dredging of Boynton Inlet, which is under way,  will go to Ocean Ridge Hammock Park.

Many residents are worried about how beach restoration will affect turtle nesting season, which began March 1 and lasts through Nov. 1.

“In Boca, they won’t be doing any work at night and so that will have no impact. If they have a dredge in Delray, they will be pumping 24 hours a day, and generally for a project that size they will allow nests to be relocated,” said Kirt Rusenko, marine conservationist at Gumbo Limbo Nature Center in Boca Raton.

The first turtles to arrive on beaches are leatherbacks, but those are very few. Rusenko counted 33 leatherback nests last year from March to June, and 994 loggerhead nests from May 1 to Oct. 31. Rusenko said the permit from the Department of Environmental Protection allows him to move turtle nests if necessary.

Sandy’s surge left escarpments as high as 4 and 5 feet on Boca and Delray beaches. If turtle nests are found at the foot of cliffs and are in danger of being washed out, those nests will be moved, Rusenko said.

And turtles will most likely move along the shore until they can get onto the beach and find a place to nest. 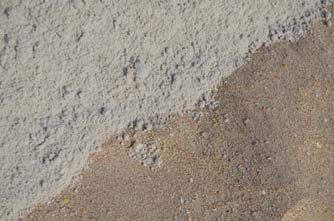 Imported sand trucked in from a mining site south of Lake Okeechobee is lighter-colored than the natural sand already on Delray’s beach.