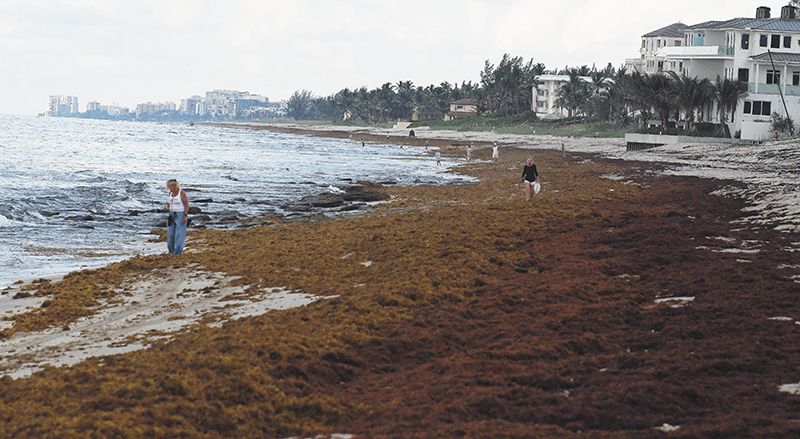 Mounds of sargassum, in places more than 30 feet wide and more than a foot deep, pile up on the beach in Ocean Ridge in mid-June. Since then some of the seaweed decomposed but then more arrived on the tide. Jerry Lower/The Coastal Star

experts, who see no threat to nesting turtles

Sargassum, the brown seaweed that is tossed onto South Florida’s beaches by Atlantic waves, has always been a mixed blessing: Environmentalists love it, beachgoers loathe it.
But this year, the piles of seaweed also have presented a mystery that has scientists baffled. It’s a new species of sargassum with larger leaves and heavier tangled mats than in years past. Where did this new sargassum come from and how did it get here? Scientists believe it didn’t take the usual path on the Gulf Stream.
It doesn’t seem to be carrying as many tiny shrimp and crabs that made the old seaweed species sources of food for seabirds.
And, most perplexing, this year there have been far fewer man-of-war that usually accompany sargassum. Could the new seaweed be keeping them away?
Sargassum started showing up on beaches in May, when it usually does. Beachgoers have to stake their umbrellas away from the mounds, which many consider ugly and smelly blights. Hotels worry about tourists’ reactions. Visitors from other parts of the country don’t know that seaweed is a beneficial part of Florida’s natural landscape.
Marine conservationists see its many virtues: It protects expensive replacement sand on the beaches, it bolsters sand dunes that help keep hurricane surges away from houses and roads, and it gives nourishment to beach vegetation.
Offshore, it provides crucial sanctuaries and nutrients to turtle hatchlings for the first years of their lives and offers safe havens for fish nurseries and protection for dolphins.
The sargassum of past years moved on currents around the Caribbean, through the Florida Straits to the Gulf Stream, and onward to the Sargasso Sea in the North Atlantic Ocean.
The new sargassum is thought to be from Brazil and did not come by currents. It most probably was blown here.
“More recently, I’ve heard a lot of it appears to possibly be a new species or a species that’s not found around here and they think it’s coming up from Brazil, which is very bizarre. I’m not sure what path it’s taken or even if it really is from Brazil,” says Dr. Kirt Rusenko, marine conservationist at Gumbo Limbo Nature Center in Boca Raton.
“If the currents are doing what they normally would do, it would be almost impossible for a floating plant to come here (from Brazil). So I would imagine it would have to be the winds. Possibly the mats are so thick that they would rise out of the water so they would be more affected by the wind.”
The lack of man-of-war normally associated with sargassum is a welcome surprise, but puzzling.
“We have no theories at all,” says Rusenko. “I don’t know if the sargassum is not allowing them to feed or it may be just too thick. I haven’t seen a man-of-war this entire summer.”

Not a threat to turtles
Even though the new sargassum has a larger leaf structure and makes bigger masses, Rusenko doesn’t think the seaweed is a threat to turtle nesting, which started in April.
“We scrape it away if it gets on a nest. Fortunately, there have been only a handful of hatchlings so far and the nests we’ve had didn’t have a lot of seaweed around,” he says. “A few days ago, it would have been a problem. There were 10- or 15-foot-wide mats they would have to climb over.”
Turtle monitors have been busy making sure the seaweed is not a problem for nests, which are often roped off.
Cleanup of beaches must follow strict rules spelled out in permits issued by the Florida Fish and Wildlife Conservation Commission and the Department of Environmental Protection. Regulations call for mechanized equipment to stay in the high-tide water line and to give turtle nests and beach vegetation a wide berth.
Clayton Peart, president of Universal Beach Services Corp., says he has seen a lot of sargassum this year. “It’s almost floating in on islands. It’s worrisome,” he says. He and his family have been doing beach cleanup since 1973 from Palm Beach to south Boca Raton.
Peart buries the sargassum in the waterline following the rules of his permits. “We level escarpments when requested, put seaweed in spots where there’s erosion when it’s not turtle season, and pick up trash. ... We’ve picked up everything from cigarette butts to boats, and a 9,000-pound net.”
Dave Rowland, owner of Beach Keeper, has been maintaining beaches for municipalities, including the beach behind the Eau Palm Beach Resort and Spa, for 21 years. He, too, has seen an upswing in seaweed.
“Three weeks of winds from the east brought in a lot of seaweed. This year has been in the top two years for seaweed. A couple of years ago,” he said, “seaweed was a foot thick from the beach to the end of the Lake Worth Pier.”
Joan Lorne of Delray Beach does turtle patrol with the nonprofit Sea Turtle Adventures on a 3-mile stretch of beach in Gulf Stream, Briny Breezes and Ocean Ridge with her daughter, Jacquelyn Kingston. Kingston has been monitoring sea turtles for 18 years, and her master’s degree research has been incorporated into the FWC’s Marine Turtle Conservation Handbook.
“I don’t have a concern about the sargassum. It’s beginning to dissipate,” says Kingston. “We usually see this. It’s nothing that’s alarming to me. The hatchlings can crawl over it. It’s part of our environment and plays an important role in our ecosystems.”
Betty Bingham has been watching sea turtles and sargassum in Ocean Ridge since her family bought a beach house here in 1959. Bingham, a former town commissioner, moved permanently to the house in 1985.
“In the old days, we would take the sargassum to the dunes to make it harder for the sand to wash out and to give nutrition to the dune plants. Sargassum is enormously nutritious,” she says.
Many towns are beginning to bury the sargassum on the beaches for the same reason — to stabilize replacement sand.
For people who don’t like the seaweed piled on the beaches, she tells them to tear off a piece and shake it into a snorkel mask, then look at the tiny shrimp and crabs that fall out. The seaweed feeds seabirds and is a nursery for sea creatures.
And to those who complain about it, she says: “Tough.”
The sargassum is dissipating, but as Rusenko says, “Who knows, it may come back.”
Michael Stahl, deputy director of Environmental Resources Management for Palm Beach County, says the seaweed “ebbs and flows, although it’s an upward trend. We’re seeing more. It depends on the shore winds and currents and it tends to get concentrated on some beaches.”
There is a lot of speculation on the causes of the larger amounts of seaweed.
“Warmer water would increase the growth rate,” says Rusenko. “We’re definitely concerned. Agricultural runoff, and pesticide and fertilizer pollution coming through the inlets are not helpful.”
As for the turtles, county officials are pleased with nest numbers, although they “won’t break any records,” says Stahl.
“The green turtles are definitely taking this year off. We’ve got five nests in Boca,” Rusenko says. “We haven’t been that low for at least 25 years, and it’s going to be statewide. For some reason, the turtles decided to nest every other year, which doesn’t mean they’re in trouble. This is just an off year. Leatherbacks had 18 nests, loggerheads 396. That’s better than it was 10 years ago. It’s a respectable number.”