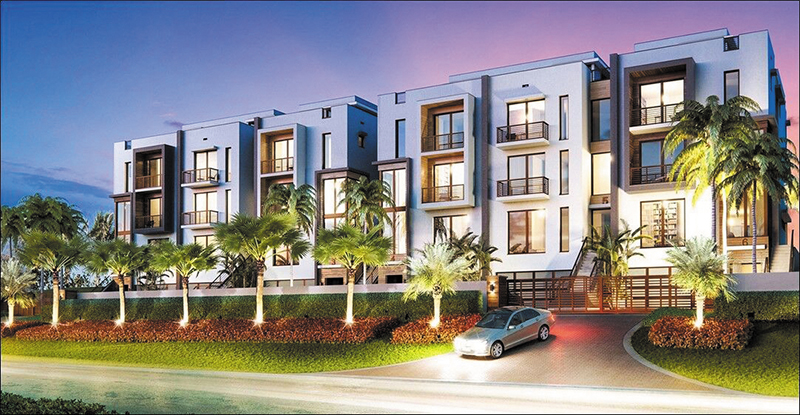 Briny Breezes residents will soon be neighbors with luxury townhome owners living on the south side of the oceanfront town.
In early June, Gulf Stream Views LLC paid $5.4 million for the nearly 2-acre site, according to county property records. The new owner, a division of National Realty Investment Advisors of Secaucus, N.J., borrowed $16.5 million to buy the parcel and build 14 townhomes.
“We have a luxury product. There are no other oceanfront parcels available in the area,” said Glenn La Mattina, senior vice president of National Realty and its new division, NR Living. “We have location, location, location.”
The price paid was almost 22 percent below the asking price of $6.895 million.
“The buyers came in and negotiated very friendly terms to the seller,” listing broker Steven Presson said. “My clients came to a point and made a business decision it was time to move on.”
David Rinker, who purchased the property in 2006 when it still housed the Pelican Apartments, paid $3.2 million for the parcel. The Old Florida-style, 11-unit complex was soon demolished. Rinker and investors planned to build Tuscan-style townhomes. He did not return phone messages.
The purchase is National Realty’s eighth in coastal Gulf Stream and Delray Beach, according to its website. Its divisions spent $37.3 million in the past year, according to county property records. National Realty’s website also lists one property each in Ocean Ridge and Delray Beach with a status of closing.
“We are building luxury units for sale or rental on the sites owned in southern Palm Beach County,” La Mattina said.
Most of the parcels have another local connection. Former Delray Beach Mayor Tom Carney’s law firm is listed as the registered agent for the limited liability corporations set up as the owner of each property. He declined to comment about his role, saying, “I don’t discuss my clients.”
National Realty also turned to a local lender for the bridge loan that covers acquisition and development of the townhomes near Briny Breezes. Trez Forman Capital Group was formed two years ago by Boynton Beach-based Forman Capital and Vancouver-based Trez Capital Group.
“I’ve known the borrowers for a long time. I started Forman Capital in 2004 in Delray Beach,” said Brett Forman, president and CEO.
His company is still optimistic about residential real estate in South Florida. “We look closely at the project and location,” Forman said. “People still want to move to South Florida.”
In mid-June, Trez Forman gave Sofa Partners a $20.6 million construction loan to build 111 First Delray, a boutique condo project in Delray Beach.
The name Gulf Stream Views comes from its oceanfront location, La Mattina said.
Site work will take place in July and construction will start in August, he said. The 14 luxury units will be ready in April 2020, La Mattina said. Preconstruction prices range from $1.8 million to $2.7 million.
Each three-story unit will have three bedrooms, an elevator, a splash pool, a two-car garage, a rooftop deck and 3,400 square feet of air-conditioned space.
Neighbor Mike Smollon, who lives in the County Pocket to the south, said, “It was inevitable that the parcel would be developed.”
He hopes the complex is constructed well and does not worsen the drainage problems in the County Pocket. With summer downpours the streets often flood, said Smollon, a retired Boynton Beach fire battalion chief.
“I believe in 10 years, we will look back on this as a landmark sale,” Presson said. “It not only will change the landscape but significantly increase property values in Briny Breezes and beyond.”

Ocean Ridge
• Closing on 6644 N. Ocean Blvd. The property now contains three condo units and sits across from the county’s Ocean Ridge Hammock Park. The parcel can hold four townhomes, according to Jamie Titcomb, town manager.
The condo owners have come in to discuss what can be built on the property. The land sits in a zoning district that is not subject to the town’s moratorium on building, he said.