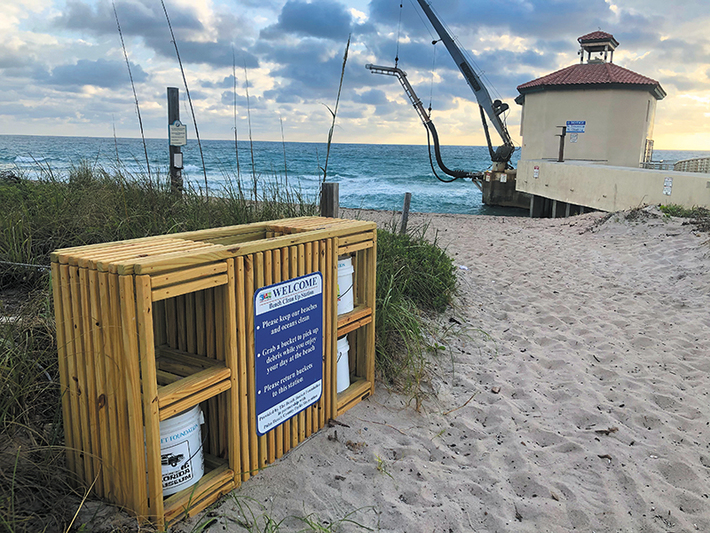 One bucket at a time, Andrew Abbott is making county-owned beaches cleaner. The Loxahatchee resident formed a nonprofit last year, Beach Bucket Foundation, to place plastic buckets in wooden containers or stations for beachgoers to use and collect trash on the sand.
“I have them installed in all of the Palm Beach County coastal parks from Tequesta down to Boca,” Abbott said.
In all, he has buckets in 15 parks with 25 stations, including at South County beaches: South Inlet Park in Boca Raton, Boynton Inlet and Ocean Inlet Park in Ocean Ridge, Gulfstream Park and Ocean Ridge Hammock Park.
Boynton Beach Oceanfront Park is the sole municipal beach on which Abbott has buckets. He’s hoping to add more.
The process is simple: A beachgoer takes a bucket, places trash in it, empties the contents in the nearest trash can and returns the bucket to the station from which it was borrowed.
“We have been getting phenomenal response from the public,” said Jimmy Davis, Palm Beach County director of aquatics. “It’s so simple, but it’s perfect. What a great concept.”
Abbott personally constructs the shelved wooden stations where the buckets are stored. Their size varies depending on the beach.
“People are using them. They are cleaning up the beaches on their own. It is working,” he said.
How does he know? Lifeguards tell him so. Some buckets are stolen, and Abbott replaces them. But, he said, “I am very surprised at how many haven’t gone missing. I’ve been very humbled by the honor system.”
Abbott buys the pails about 50 at a time from Home Depot. None of this costs the county a cent. That’s because he also finds sponsors.
“I’m a one-man operation, basically,” he said. “I reach out to the local businesses and ask them if they want to get involved. If they do, they send me their logo and I send it to my printer. I put my sticker on [a bucket] and their stickers on, and I place the bucket in a station.
“Without those guys, this wouldn’t be possible. When you get the businesses involved, you start building awareness in the community.”
Some cities have created their own beach bucket programs, or plan to. Boca Raton’s Community Coastal Cleanup provides metal buckets next to signs explaining the program at Red Reef, Spanish River and South Beach parks.
In the coming months Highland Beach plans to buy 40 to 50 buckets and place them at four sites along the beach. The buckets will have the town’s logo and a slogan on them.
Picking up trash addresses, in a small way, the enormous global problem of beach and ocean pollution, especially from plastics.
The nonprofit Ocean Conservancy has mobilized an annual international coastal cleanup for more than three decades. In 2018, 891,255 items were collected from Florida beaches, weighing nearly a half-million pounds, the group says.
The most common types of beach trash contain plastic. The most numerous items collected on U.S. beaches are cigarette butts. Even cigarette filters contain plastic, the conservancy says. Among the other most common litter picked up: bottle caps, beverage bottles, and straws and stirrers, all made of plastic.
Plastic ends up in oceans, and it doesn’t fully degrade. Marine animals, like sea turtles and fish, mistake small pieces for food. That can sicken and kill them, and be passed up the food chain.
And so, Abbott continues leaving buckets for beach visitors to do their small part to help.
“Usually, I’ll stop at a beach and do a little beach cleanup myself,” he said.
Mary Hladky and Rich Pollack contributed to this story.