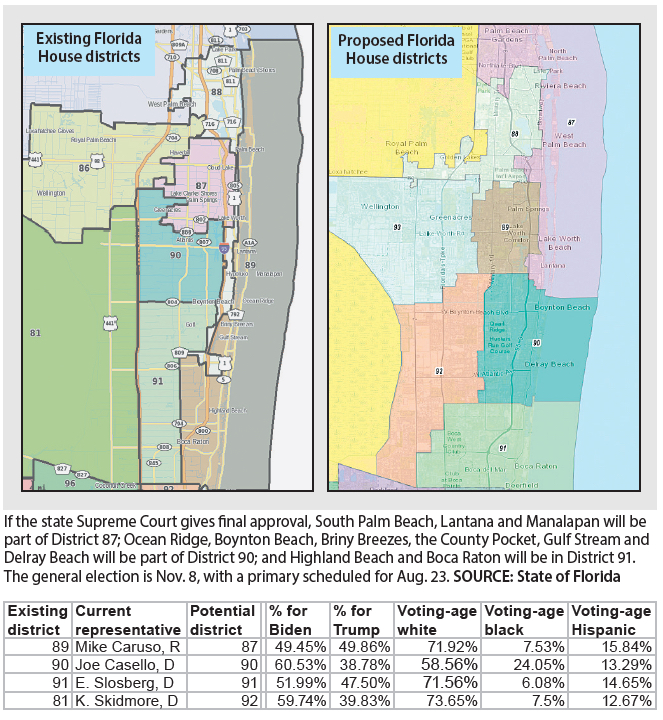 For the past decade, coastal residents have had a single Florida House member representing them in Tallahassee.
This year that’s going to change.
Somewhat mournfully, state Rep. Mike Caruso is saying goodbye to most of his long, narrow coastal district, which included voters from Boca Raton to South Palm Beach and beyond.
Those coastal communities instead will be covered by three House districts drawn horizontally, so that coastal residents will be competing for their representative’s attention with residents from as far west as Florida’s Turnpike in one district and Military Trail in another.
That’s not all bad, political observers say, pointing out that coastal residents will have three advocates in the state House where they now have one, as the House and Senate redraw the maps to account for population shifts identified in the decennial census.
“Having three representatives giving you attention is probably a bonus,” said Boca-based County Commissioner Robert Weinroth, who for years has seen that play out with three House members representing the city of Boca Raton and west Boca.
The key is that coastal residents vote and contribute to campaigns, said longtime campaign consultant Matthew Isbell. They are an especially important voting bloc in districts that aren’t dominated by a single political party.
“From a purely political perspective, both (Districts) 87 and 91 are going to be completely fine when it comes to beach issues because in those narrowly (split) districts every vote matters, whether it’s inland or on the beach,” Isbell said.
The downside is the loss of expertise required to master issues unique to the coastal communities, said Highland Beach Commissioner Peggy Gossett-Seidman, who is running as a Republican for the new House District 91 seat.
“That’s an advantage to have one person to affect the beach, intertributary canals and so forth,” she said. “Chopping it up will put a number of (representatives) in that same community so it would take the three working together to achieve what one person did previously.”
South County coastal residents will have three members in the state Senate as well, as the Senate maps approved by the Legislature in early February also cut horizontally, creating Senate districts for Boca Raton, Boynton-Delray and points north.
For Caruso, a Republican who represents District 89, it’s bittersweet. He’ll be forced to establish a residence farther north to run in a Republican-leaning District 87 that starts at the Boynton Inlet and covers Hypoluxo, Lantana, Manalapan and South Palm Beach, as well as large swaths of West Palm Beach and Palm Beach Gardens, before ending at Marcinski Road in Jupiter.
The district went 49.8% for then-President Donald Trump and 49.5% for Joe Biden in 2020, but as of 2020 had a slight edge in Republican registration, figures provided on the Legislature’s redistricting website show.
His new district’s voting-age population would be 71.9% white, 7.5% black and 15.8% Hispanic, legislative calculations show, which is less white than the 2010 figures for his current district (80% white, 7.6% black and 9.5% Hispanic).
“It saddens me the way that redistricting has come on forces me to have to move,” Caruso said.
Caruso has lived in the South County coastal area for 35 years, and he said he’s not ready to give up all his ties: He’ll hold on to his beachfront condo in Delray Beach.
Caruso has no plans to abandon the Republican Party after the county’s Republican Executive Committee censured him in February for his endorsement of a Democrat, Katherine Waldron, for a House seat in a predominantly Democratic district. The local party officials asked state party leadership to prohibit Caruso from running as a Republican ever again, a step he said the state party assured him it would not take.
The Democratic leanings of the new District 90 covering Delray Beach and Boynton Beach didn’t work for him. “They turned that into a plus-22 (point) Democratic seat,” he said. “So I can’t stay there.”
Legislative calculations show 60.5% support in the new district for Biden in 2020 and 38.8% for Trump.
That seat is where incumbent Joe Casello, a Democrat, plans to run. Coastal representation is new territory for Casello, who points out that his old District 90 didn’t go east of Interstate 95.
That being said, he pointed to his long ties to the area and his time on the Boynton Beach City Commission. “I’m excited about it,” he said.
The district would go from the northern tip of Highland Beach to the Boynton Inlet and west to Military Trail. The Legislature calculated the voting-age population as 58.5% white, 24% black and 13.3% Hispanic.
As for having three members? “We all work as a team up here. I don’t think it’s a bad thing. This way you have three voices here,” Casello said.
Farther south, Boca Raton and Highland Beach fall into District 91, Emily Slosberg-King’s seat that used to run entirely inland. The new map has it encompassing all of Boca Raton and much of west Boca, as well as the coast to nearly the Delray Beach line.
Slosberg-King, a Democrat, has announced she will not run again, setting off a surge of interest in the district that voted 52% for Biden in 2020 and 47.5% for Trump and has a voting-age population of 71.5% white, 6% black and 14% Hispanic.
A day after Slosberg-King’s announcement, Boca Raton Councilman Andy Thomson said he would run in District 91 as a Democrat. Gossett-Seidman and west Boca resident Christina DuCasse moved quickly, too, saying they would seek the Republican nomination.
A fourth South County seat, District 92, would be carved out of the area’s western fringe, running from the Broward line north to Hypoluxo Road. Rep. Kelly Skidmore, a Democrat, would be seeking her second term in that district.
The state’s 120 House districts contain about 180,000 people each while the 40 Senate districts contain about 538,000 people each. Legislators are required to redraw the maps every 10 years to keep the districts uniform in population.