Oct. 6: Lake Boca Raton crested over a seawall, flooding the Por La Mar neighborhood in Boca Raton and allowing mullet and other marine life to swim into the streets and yards of homes.

With king tides, Hurricane Irma and torrential thunderstorms still fresh in the minds of residents, a small group of representatives from area coastal communities is meeting informally in hopes of working together to address rising-water issues caused by weather-related events.
Known as the Southeast Palm Beach County Micro-regional Group, the representatives from small towns — among them Ocean Ridge and Highland Beach — are joining forces with members from Boca Raton, Delray Beach, Boynton Beach and Lantana to share information and ideas and perhaps make policy recommendations that multiple communities can adopt.
“Our goal is to have cities and towns work together to develop solutions related to climate change and sea-level rise,” says Nancy Schneider, the volunteer facilitator for the group and a senior program officer with the Institute for Sustainable Communities. “Sea-level rise and flooding are top issues.”
All the communities involved in the group share a common denominator — the Intracoastal Waterway — and previously took an individual approach to addressing rising-water issues, rather than regularly communicating with one another.
Yet, according to Schneider, actions of one community could negatively affect another. For example, rising water levels could cause a septic tank in one community to overflow into waterways shared by neighboring communities.
“What one community does impacts another,” she said. “We need to take a cohesive approach rather than an individual approach.”
During an informal meeting last month, the second time the group gathered, representatives from the coastal communities discussed ways to share information and best practices, and communicate a coordinated message. They also discussed working together to educate the public about the impact of rising water levels and what can be done.
The group discussed the possibility of creating an informational brochure that could be distributed to residents in all of the communities, presenting a consistent message and sharing costs. Members also plan to bring speakers to their every-other-month meetings who can provide information beneficial to all communities.
Ocean Ridge Commissioner Don MaGruder, who attended last month’s meeting, believes his town can benefit from hearing how communities are addressing rising water issues.
“You don’t want to waste a lot of time reinventing the wheel,” he said. “There’s a lot to learn from what other cities and towns have done to educate the public and mitigate the problems.”
In addition to sharing what’s been done in the past, the group talked about sharing studies rather than having each city or town hire consultants to do similar research.
Delray Beach, for example, is having a coastal engineering firm study seawalls in the community and make recommendations on how they can be improved. While the conclusions will be specific to Delray Beach, there may be findings that could benefit other communities.
“We want to share that information,” said Ana Puszkin-Chevlin, sustainability officer for Delray Beach, which is one of the local leaders in addressing sea-level rise.
In fact, Schneider says, the local group was formed after Delray Beach’s Rising Waters Task Force recommended it in a  report to the City Commission.
“The recommendations in the Rising Waters Task Force’s report could be beneficial to all the communities in the micro-regional group,” she said.
The area group, Schneider said, is a localized way to gain momentum for implementation on the Regional Climate Action Plan, the guiding document developed by the Southeast Florida Regional Climate Change Compact for all of southeast Florida.
“As a result of the cooperation within the micro-regional collaborative, cities will be better able to implement the regional plan recommendations by sharing best practices with city neighbors, being more efficient through economies of scale and taking a uniform approach to actual implementation,” Schneider said. 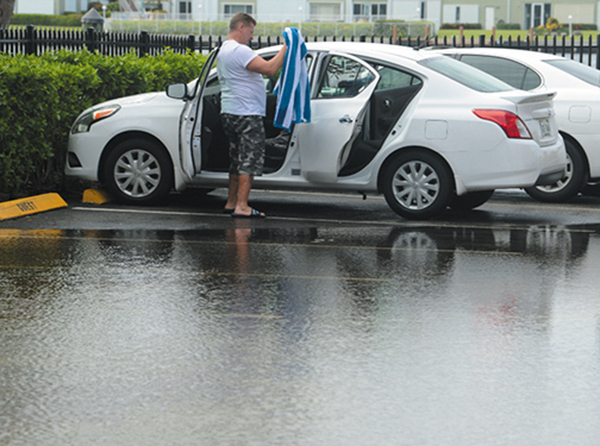 Oct. 6: Boca Raton resident Ralph Marazzo used a towel to dry out the rear foot-well of his rental car parked at the west end of Sweetwater Lane in Boca Raton. Not only did the high water created by the annual king tides drench the inside of the car, it also shorted out the battery