Related Story: Will our next beach renourishment use Bahamian sand?

Manalapan is stepping up efforts to block a proposed beach stabilization project that would install concrete groins to capture sand in South Palm Beach.
On July 18, Manalapan Mayor Keith Waters and Town Manager Linda Stumpf met with Palm Beach County Commissioner Steven Abrams to outline the town’s opposition to the project.
Waters told Abrams what he’s been telling his residents: The town is prepared to do “whatever it takes” to prevent the installation of groins that will “steal” sand from Manalapan.
The project, which county environmental managers hope to begin in November 2018, is going through a complicated permitting phase now that requires approvals from federal and state agencies. Waters said the town intends to intervene in that process and argue against granting the permits.
After the meeting, Abrams sent an email to Rob Robbins, director of the county’s Environmental Resources Management department, which oversees the project. Abrams’ remarks reflect the conflicted positions officials find themselves in as neighbors turn against neighbors in disputes over sand for their beaches.
“I am in the middle of this as the district commissioner for both them and South Palm Beach, as well as my responsibility to protect county interests,” Abrams wrote. “It would certainly be in everyone’s interest to resolve this matter without resort(ing) to any adversarial proceedings.”
Robbins responded to Abrams with a call for patience:
“Our applications are not yet complete and we have at least many months to go before they will be complete,” Robbins wrote in an email. “What I’m trying to convey is that the town should not feel rushed to intervene.”
Robbins said, “We hate to see the town spend money defending themselves from the county.”
Manalapan’s opposition is based largely on what the county and the U.S. Army Corps of Engineers don’t know about what the groins’ impact would be on the beaches south of South Palm Beach. 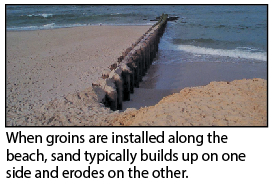 The fear is the concrete devices would greatly disrupt the natural north-to-south flow of sand, capturing so much that there’s not enough left to replenish the beaches in Manalapan and its southern neighbors. Waters points to Broward County, where Hillsboro Beach is dealing with severe erosion and is suing northern neighbor Deerfield for using groins to trap sand.
Stumpf says South Palm Beach has concern about the sand transfer station at the Boynton Beach Inlet, technically known as the Lake Worth Inlet. The man-made entry to the Intracoastal Waterway interrupts the natural flow of sand south. The purpose of the transfer station is to mechanically pick up sand from the north side of the inlet and pump it to Ocean Ridge on the south side.
“If we don’t get sand in Manalapan,” Stumpf says, “then we don’t have anything to transfer to Ocean Ridge.”
Manalapan officials warn of a cascading effect in which sand flow dies at the inlet, starving beaches not only in Ocean Ridge, but in Briny Breezes, Gulf Stream and Delray Beach.
Army engineers have offered little to allay this concern. In June 2016, the Corps released a 481-page Environmental Impact Study, detailing the plan and examining its potential effects. Manalapan was mentioned only 27 times, with nearly all of the references historical or perfunctory.
“We’re willing to pay for our own study to show the damage this project could do,” Stumpf said. 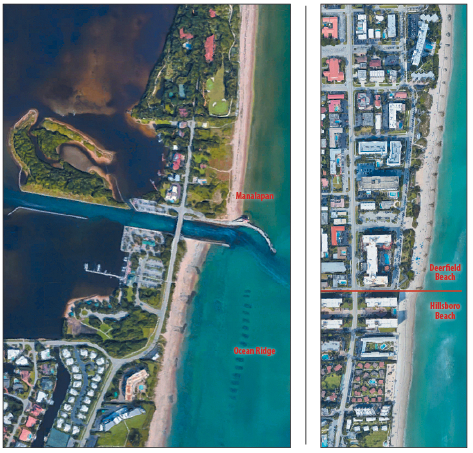 ABOVE LEFT: Beach sand naturally follows the predominant tidal action ‘littoral drift’ south along our coast. Physical barriers like groins and inlet jetties slow that drift, depriving the neighbors to the south. Manalapan is required by a judge’s ruling to allow the county to pump sand across the Boynton Beach Inlet to prevent sand starvation in Ocean Ridge. Ocean Ridge also benefited from a 2015 renourishment project to widen the beach on the south side of the inlet.
ABOVE RIGHT:  The town of Hillsboro Beach is suing the city of Deerfield Beach over the installation of groins along the Deerfield coast that are slowing the littoral drift and holding the sand captive. Google Earth photos