Republican state Rep. Mike Caruso has been the sole House representative for the South County barrier islands since 2018. That ended with redistricting based on the 2020 U.S. Census.
Now he’s running in Republican-leaning District 87, which includes the barrier islands north of the Boynton Inlet, hugs the coast northward through Palm Beach and Singer Island and takes in half of Palm Beach Gardens and a slice of Jupiter.
The change forces him out of his longtime Delray Beach base. He is keeping his oceanfront Delray home but moving into a downtown West Palm Beach condo to live in the district.
Caruso, 64, an accountant, beat back an August primary challenge from his political right, winning two-thirds of the vote against Jane Justice.
On Nov. 8, he’ll face Democrat Sienna Osta, who in her only previous race ran unsuccessfully for Florida House District 88 in 2020.
Instead of a single House member, as in years past, the barrier islands from Boca Raton to South Palm Beach will be represented by three House members under newly drawn maps approved by the Legislature in February.
In Boynton-Delray dominated District 90, Democrat Joe Casello takes on Republican Keith Feit. Boca-centered District 91, which encompasses all of Boca Raton as well as the coast nearly to the Delray Beach line, pits Highland Beach Town Commissioner Peggy Gossett-Seidman, a Republican, against Boca Raton Councilman Andy Thomson, a Democrat.
Osta, 34, a first-generation Lebanese-American lawyer who lives and works in downtown West Palm Beach, was spurred to run by a desire to do more than just post on social media as Black Lives Matter protests erupted during the coronavirus quarantine months.
Prompted by the media attention to the Gabby Petito missing persons case and lack of similar attention for cases involving Black and brown women, she is ready to propose legal requirements that police must meet within the first 48 hours of a missing-person report.
“We have Amber Alerts for minors up to 18 years old,” she said. “What about the rest of us?”
She also would focus on support for women’s rights and fixing Florida’s unemployment compensation system.
Caruso said he would emphasize measures to combat rising prices.
“This election comes down to inflation, inflation, inflation,” he said. “Whether gas, rentals, food or interest rates, people are concerned that if they’re feeling the pinch, their young adult children are really feeling the pinch.”
Steps the Legislature can take include suspension of the state gasoline tax, which it agreed to do for October, and reducing the commercial lease tax. Other actions: raising salaries and bonuses for teachers, police and firefighters.
Caruso said House leadership has asked him to examine ways to reduce property taxes and he’s confident Republicans can find a way to keep property insurers from canceling policies over such items as the age of a roof.
He supports the GOP-enacted 15-week ban on abortion as “good law.”
Through Sept. 9, Caruso had raised about $186,000, with about $61,000 remaining, to Osta’s $4,500.

District 90: Casello vs. Feit
Joe Casello has never campaigned in Delray Beach before.
He’s a fixture in Boynton Beach, where he served five years on the City Commission before jumping in 2018 to represent the city in the state House.
But newly drawn District 90 splits his district between Boynton and Delray and adds the barrier island from the northern tip of Highland Beach through Ocean Ridge.
As a Democrat, Casello, 70, is realistic about what he can accomplish in the state House.
“One party dominates,” he said. “To get things done, I take pride in working across the aisle, earning their respect. In the end, it’s the agenda of the House speaker or Senate president and DeSantis. That’s just how it goes.”
While he says he won’t “bad-mouth” Gov. Ron DeSantis, he criticized actions he called “self-promoting,” like sending migrants from Texas to Martha’s Vineyard.
“I will never be a Ron DeSantis supporter. I think he has control to do a lot more good than what he’s doing,” Casello said.
He objected to the Republican bill capping abortions at 15 weeks without exceptions for rape or incest and said he expects next year’s fight to revolve around a six-week ban, as approved in Texas.
He called his opponent, Keith Feit, “a far-right Republican.”
Feit, 47, a middle-school teacher at The Weiss School in Palm Beach Gardens with a home in Boynton Beach, took issue with Casello’s voting record.
“I’m not in this race because of any personal animosity toward Joe Casello. My concern is the way he voted,” Feit said. “He’s not representing the people.”
He cited Casello for opposing the Parental Rights in Education Act, educational choice and keeping critical race theory out of classrooms.
“I believe parents need to raise our children, not the government or administrators,” he said. “My representative votes against legislation that would keep that (sexual orientation) out of kindergarten to third grade. That’s not looking out for the kids. It’s a war on parents.”
DeSantis, he said, “hit it out of the park” on education.
Feit said he supports the recently enacted 15-week abortion ban, although he would make exceptions for rape, incest and the health of the mother. “Four months is enough time for a woman to decide whether or not to keep her baby,” he said.
While Casello raised $26,000 through Sept. 9 and spent $21,000, he has a political committee, JC PAC, that has raised $90,000, mostly from firefighters, and spent $11,000.
Feit has raised $20,450 and spent nearly $7,000. 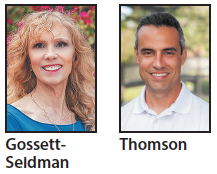 A Highland Beach Republican takes on a Boca Raton Democrat in the most competitive state House contest awaiting barrier island voters.
Peggy Gossett-Seidman, a 31-year Highland Beach resident and town commissioner since 2018, is running for the open House District 91 seat against Andy Thomson, a Boca Raton resident since 2016 and City Council member since 2018.
The Boca-centered District 91, formerly represented by Emily Slosberg-King, used to run entirely inland. Now it encompasses all of Boca Raton and much of west Boca, as well as the coast nearly to the Delray Beach line.
The 2020 presidential results, with District 91 voters going 52% for Joe Biden and 47.5% for Donald Trump, offer Thomson an advantage. He calls himself a moderate able to work across party lines in the Republican-controlled Legislature.
Gossett-Seidman says her ability to get legislative approval for three bills providing $1.1 million for Highland Beach projects indicates her ability to work in Tallahassee.
“This isn’t just a popularity contest in Boca Raton,” she said. “It’s about how you get things done.”
Thomson countered that DeSantis vetoed the spending. “I’m not sure I buy that she will be able to bring more resources back,” he said. “It’s not borne by recent history.”
However, in July, the town received $375,000 toward a new fire station and $275,000 to rehabilitate sewage lift stations from a joint legislative committee. Gossett-Seidman said the governor anticipated that money being available when he made his vetoes.
Gossett-Seidman, 69, a former newspaper reporter, defeated Christina DuCasse with 52.5% of the vote in the August primary. She credited her victory to knocking on doors and her work in Tallahassee.
She said she would focus on fighting inflation by reining in property insurance costs and fighting high housing costs. She pointed to her “reporter’s mentality” for helping to save Highland Beach $2 million a year by severing its decades-long relationship with Delray Beach for fire rescue services.
On abortion, Gossett-Seidman supports the state’s 15-week ban but said she doesn’t expect the Legislature to seek an outright ban.
Thomson, 40, a lawyer with a degree from the University of Miami, points out that the Florida Supreme Court has upheld the right to abortion through a privacy right in the state Constitution, making it difficult for Republicans to enact an outright ban. He said he would not support criminalization of abortion.
Thomson, who did not have a primary contest, is a father of five children, ages 1 to 10. He jogs 3 to 4 miles several times a week, picking up litter along the way and challenging himself to cover all 500 miles of city streets every year.
He said he would press for action on housing affordability. One key is to do more about property insurance than what emerged from a special legislative session earlier this year.
Gossett-Seidman too anticipates more action on insurance, saying legislative leaders already have indicated an interest in reconsidering the issue.
“That the Legislature is looking at it again tells you everything you need to know about how effective it was,” Thomson said.
He also would push for stricter gun background checks and red flag laws that would allow family members, not just police, to seek gun confiscation.
Through Sept. 9, Thomson had raised nearly $208,000 plus a $30,000 loan from himself. He still had more than $200,000 to spend.
Gossett-Seidman raised $95,000 and lent her campaign $200,000, about the amount already spent as she heads into the general election.

Senate races
Democratic-leaning District 26, which runs along the coast from Glades Road to the Boynton Inlet and spreads as far west as Belle Glade, pits state Sen. Lori Berman, a Democrat, against Steve Byers, a Republican. Berman, who has served in the Legislature since 2010, has raised $134,000. Byers raised $1,700 and lent his campaign $54,800.
Democratic state Sen. Tina Polsky is running against Republican William Reicherter in Broward-dominated District 30, which includes Boca and west Boca south of Glades Road. Polsky has raised $150,000 while Reicherter has raised $11,500.
The barrier islands north of the Boynton Inlet fall into Senate District 24. Those residents will choose between Democratic state Sen. Bobby Powell, who has raised $103,000, and Republican Eric Ankner, who has raised $3,300.

County Commission
The barrier islands from Boca Raton to Palm Beach fall into Palm Beach County Commission District 4, which features Democratic incumbent Robert Weinroth, a former Boca Raton councilman, against Republican Marcia “Marci” Woodward.
Woodward, who wrote on her website that she is running because she opposed county coronavirus pandemic mandates, raised about $45,000 through Sept. 9. Weinroth had raised $314,000.