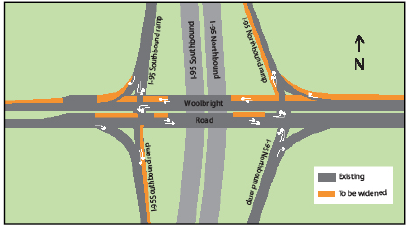 Improvements at Woolbright Road and I-95 are about to begin. Construction of the new Spanish River Boulevard interchange on Interstate 95 in Boca Raton will hit the two-thirds completion mark sometime this month, while work to improve the interchange at Woolbright Road in Boynton Beach is just getting underway.
Both projects are scheduled to be finished in summer 2017.
At Spanish River, 11 of the project’s 13 bridges are under construction, and “mechanically stabilized earth,” or MSE, walls are being built. Ponds are being excavated, new ramps are being constructed and work continues on widening, paving and drainage operations on the interstate between Glades Road and Congress Avenue.
The biggest change will be lane shifts the week of March 6 to permit work on the median, said Andrea Pacini, a Florida Department of Transportation spokeswoman. The lanes in both directions will be moved over between Spanish River Boulevard and Yamato Road, she said.
Pacini said Spanish River Boulevard will be entirely closed to traffic between Broken Sound Boulevard and Airport Road the week of March 6 from 10 p.m. to 6 a.m.
“We now have to demo the other half of the Spanish River bridge,” she said.
The Spanish River interchange, with a $68.8 million price tag, will be Boca Raton’s fifth entrance/exit on I-95.
While work goes on, the interstate between Glades Road and Congress Avenue may also have up to three lanes closed, as needed, from 9 p.m. to 5 a.m. Sunday through Thursday. The southbound I-95 entrance ramp from eastbound Yamato Road may also be closed as needed during those times. The project area is 2.5 miles long.
In Boynton Beach, nightly lane closures of Woolbright Road began the week of Feb. 28, Pacini said. One lane in each direction is closed from 9 p.m. to 4 a.m. Sundays through Thursdays, she said. The closures will continue through March.
Woolbright will be widened from Southwest 18th Street on the west side of I-95 to Southwest Second Street on the east. Plans call for twin left-turn lanes in both eastbound and westbound directions onto the interstate, widening the northbound ramp to receive the eastbound turn lanes and transition to one lane, and rebuilding the south exit ramp to allow traffic to flow freely onto westbound Woolbright.
The $9.1 million project stretches over 0.9 mile of Woolbright.
Farther off on the horizon are improvements to the I-95 interchange at Linton Boulevard in Delray Beach, scheduled to take place in 2019. But on March 15 the state DOT will hold a public information workshop on its plan at the Delray Beach Public Library, 100 W. Atlantic Ave. The workshop will be in an open-house format from 5:30 to 7:30 p.m. in the first-floor, large conference room.
The $11.2 million project will widen the on-ramps and move them closer to I-95, and add bike lanes to Linton Boulevard, among other changes. The work is expected to begin in spring 2019 and be finished by fall 2020.
The workshop is meant to let people comment on the proposed design and the social, economic and environmental effects of the planned improvements.