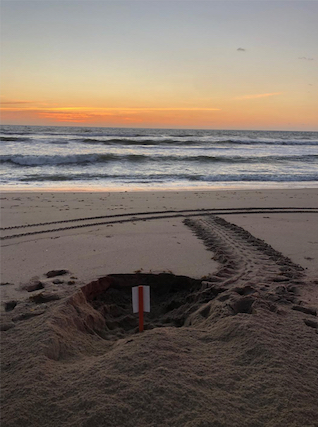 A late green sea turtle laid this nest Sept. 24 on the beach in Gulf Stream. The eggs were expected to hatch in about 60 days from then. Sea turtle season officially ends Oct. 31 and begins again March 1.
Photo courtesy of Sea Turtle Adventures

Navigating the perils of ocean pollution, watercraft, high tides and other hazards, sea turtles are concluding another robust nesting season on South County beaches.
“I think overall it was a good season,” said Joseph Scarola, senior scientist at Ecological Associates Inc., which monitors Delray Beach’s 3-mile shoreline.
Turtle nest monitors in Highland Beach, Boca Raton and elsewhere along the South County coast said much the same.
Three species deposit tens of thousands of eggs on local beaches — loggerhead, green and leatherback turtles.
Nesting season is March 1 to Oct. 31, although some species may venture ashore before or after those dates in very small numbers. At Highland Beach, for example, two existing nests likely won’t produce hatchlings until sometime in November, said Barbara James, who has the marine turtle permit there.
Leatherbacks are the largest sea turtle species and few of them dig nests on South County beaches, preferring oceanfront somewhat to the north. Only 13 leatherback nests were tallied on Boca Raton’s 5 miles of beaches, compared to 18 in 2019, said David Anderson, sea turtle conservation coordinator at Gumbo Limbo Nature Center, which keeps tabs on nests there.
That decrease was more than offset elsewhere, however. Last year a record number of 15 leatherback nests were found in Delray Beach. This year saw a new high with 21, Scarola said.
It was a similar story along a 3-mile expanse of beaches in Gulf Stream, Briny Breezes and a portion of Ocean Ridge. Nest monitors from Sea Turtle Adventures located a record-high 19 leatherback nests there. That topped the previous high of 16 nests in 2009, said Jackie Kingston, the nonprofit’s president and founder.
Green turtles are an anomaly in that they nest locally in much greater numbers in odd-numbered years than even-numbered. Last year, a record number of 393 green turtle nests were recorded on Boca’s beaches.
This season’s 132 nests are more aptly compared to the total in 2018, when only 19 nests were counted, or 2016, when there were 38 nests. In fact, this year’s count is a record for an even-numbered year, dating back to 1988 when nest numbers were first tabulated by Gumbo Limbo.
“We jokingly like to say it was a high low,” Anderson said.
Maybe there was an influx from Delray Beach. Green turtle nests there dropped from 58 in 2019 to 42 this year, Scarola said.
Kingston’s 3 miles of beach saw similar results to those in Boca Raton. She said “it was a high low year to our surprise … more greens than we expected for a low year.”
Loggerheads are the most prolific nesters on South County beaches. This year’s 756 nests fell short of last year’s 913 in Boca Raton, but exceeded the 686 nests found in 2018. “It was an above-average year,” Anderson said.
In Delray Beach there were 285 loggerhead nests this year — five shy of last year’s record high of 290, Scarola said. Like Anderson, he said numbers are preliminary, but unlikely to change much.
Although South Florida didn’t suffer a direct hit from a hurricane this season, Hurricane Isaias still managed to “wipe out a lot of nests,” Scarola said. In all, 76 nests were lost to erosion or inundation in Delray Beach this year, compared to 61 last year, he added.
On Boca Raton’s beaches, 108 nests were lost. About 80% of that was due to Isaias and high tides, and 20% to foxes and raccoons, Anderson said.
High tides that reached the dunes also adversely affected Highland Beach’s nests, James said.
Turtle monitors also assess the number of false crawls — instances where tracks indicate a turtle came ashore and then returned to the sea without nesting. Factors such as people on the beach at night, too many lights nearby and unsuitable sand can cause a turtle to delay laying eggs.
All three species had similar false crawl rates as last year in Delray Beach, Scarola said.
In Boca Raton, turtles that came ashore to make a nest returned to the sea more than 60% of the time, Anderson said. They almost always return to try again, he added.
It’s too soon to know the full impact of this season’s temperatures on hatchlings’ gender. FAU professor Jeanette Wyneken’s ongoing research has found that hotter temperatures during sea turtle incubations result in vastly more female hatchlings. In the past two years, she found no males at all in her samplings on Boca’s beaches.
However, a small sampling of hatchlings from two loggerhead nests this season offered encouragement. “We did find some males,” Wyneken said.