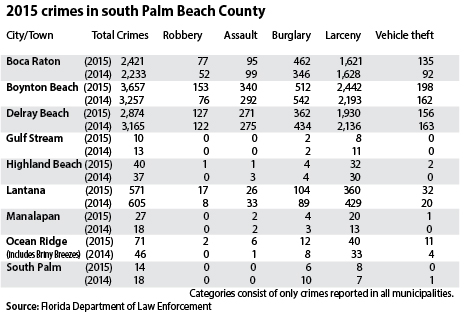 Crime in the small coastal communities of south Palm Beach County remained relatively low in 2015, although a rash of car break-ins and auto thefts carrying over from surrounding larger communities may have been responsible for what appears to be a significant increase in at least one town.
Overall, there were 162 combined major crimes reported in the six coastal towns of Briny Breezes, Gulf Stream, Highland Beach, Manalapan, Ocean Ridge and South Palm Beach compared to 132 in 2014, according to figures reported last month by the Florida Department of Law Enforcement.
While Gulf Stream and South Palm Beach saw small decreases in the actual number of crimes committed, Highland Beach and Manalapan had slight increases. In Ocean Ridge, however, the number of total crimes increased by 25, from 46 to 71.
The Ocean Ridge numbers include Briny Breezes, policed by Ocean Ridge, but very few of the crimes in the overall number were committed in Briny Breezes, according to Ocean Ridge Police Chief Hal Hutchins.
Hutchins said a number of factors contributed to the increase in overall crimes reported by Ocean Ridge, including thefts from primarily unlocked vehicles and burglaries committed by people coming from surrounding areas.
Those crimes, he said, in many cases reflected those that law enforcement agencies throughout South Florida have been experiencing in their jurisdictions.
“We had what we felt was a rash of thefts from vehicles,” Hutchins said. “We are working with surrounding agencies to try and combat this.”
Hutchins said the increase in the number of reported crimes is something residents should know but not be overly concerned about.
“It’s something for residents to be aware of so they can become more vigilant, which helps us bring the number down,” he said. “Perhaps their awareness and their vigilance will help us reduce the number of crimes in our community to zero.”
Like the other small towns that line the coast of southern Palm Beach County, Ocean Ridge did not have any reported forcible rapes or homicides.
The town, however, did have two reported robberies, which Hutchins said appeared to have occurred after people followed residents home from outside of town.
Like Hutchins, Highland Beach Police Chief Craig Hartmann says it’s important for residents to be on the lookout for things out of the ordinary and call police about them.
“We want to know when residents see something that doesn’t look right,” Hartmann said.
In Highland Beach, the number of total crimes increased from 37 to 40, with a couple more larcenies and auto thefts reported than in 2014 but two fewer assaults. There was also one reported robbery in 2015, with none reported the previous year.
Hartmann said visibility plays an important role in deterring crime and says that there’s no way of accurately knowing how much crime has been prevented.
“There’s no measurement for what doesn’t happen,” he said.
Overall crime in Palm Beach County remained fairly flat in 2015 with an increase of less than 1 percent. In all, there were 47,769 crimes reported in the county, 450 more than reported in 2014.  Homicides   countywide, however, increased from 78 to 97 and rapes jumped from 473 to 523.
Among the larger cities in southern Palm Beach County, Boca Raton saw an 8.4 percent increase in reported crime in 2015, Boynton Beach saw a 12.3 percent increase and Delray Beach reported a 9.2 percent decrease.
There were one homicide and 30 rapes in Boca Raton in 2015, up from no homicides and 16 rapes in 2014. In Delray, the number of homicides dropped from five to three while rapes fell from 30 to 25, and in Boynton Beach the number of homicides rose from four to eight, while rapes declined from six to four.
Statewide, overall crime dropped about 1.6 percent, due largely to a 10 percent decrease in burglaries, while the state saw an increase in the number of homicides, rapes and motor vehicles thefts.