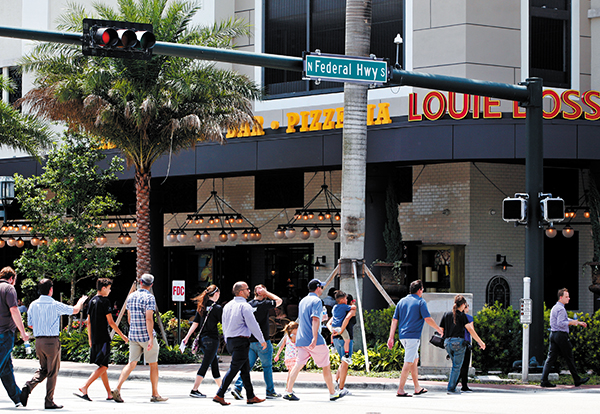 As part of its research of U.S. 1, the Transportation Planning Agency held walking workshops in Boca Raton and other cities. File photo by Tim Stepien/The Coastal Star

After more than a year of study and hours of research, the Palm Beach Transportation Planning Agency has come up with a draft report for improvements to 42 miles of U.S. Highway 1 in Palm Beach County.
The 176-page report focuses on roadway improvements that can make travel along the corridor safer for pedestrians, bicyclists and motorists. It also focuses on creating a branded express bus service that would be safe and convenient for people using public transportation.
“Our core goal was to improve the corridor for all users and make it safer,” said Valerie Neilson, the Transportation Planning Agency’s deputy director for multimodal development and the project manager.
The draft of the U.S.-1 Multimodal Corridor Study, scheduled to be presented to the agency’s board this month, includes dozens of recommendations for improvements that could be implemented by the Florida Department of Transportation. The agency also makes improvement recommendations to municipalities along the route.
A blueprint of sorts, the plan is just one of the first steps in a long process that would include reviews by other agencies and could take several years before many of the most extensive recommendations could be implemented.
“We need to do further analysis,” Neilson said.
In looking at roadway improvements along the corridor, the staff members and consultants behind the report recommend changes such as connecting sidewalks in areas where there are gaps and creating bike lanes where they don’t exist. The report also looked at areas where landscaping could provide shade for pedestrians as well as those using public transportation.
In some cases, the study recommends reducing speed limits to enhance safety and in other instances recommends reconfiguring roads to make room for bike paths and walkways.
On the stretch of U.S. 1 from Camino Real to Southeast Mizner Boulevard in south Boca Raton, for example, the study’s authors recommend the roadway be narrowed from six lanes to four lanes to make room for on-street parking and a protected bike lane. In coming up with the recommendation, the team considered many factors, including projected traffic volumes along the roadway in 2040.
In some areas, the team does not recommend lane changes but does suggest narrowing landscaped or green areas to add two-way bike paths on either side of the roadway.
In some cases, the report recommends that bike paths be buffered from traffic by a structure or barrier.
In areas where lanes would be reduced — including sections of U.S. 1 in Hypoluxo and Lantana — approval from local municipalities would be required, in addition to consent from FDOT.
Neilson said while the study was being conducted, the team found areas where improvements could be made that were outside the FDOT right of way, which is the area under study. In those cases the FDOT is making recommendations to the local municipality.
For example, one recommendation to the city of Delray Beach for a portion of the road near Linton Boulevard would be to add trees and landscaping for additional pedestrian comfort.
In looking at public transportation, the report’s authors took comfort and health factors and convenience into consideration when recommending where bus stops along the rapid transit system’s line would be.
Locating a bus stop near a grocery store, for example, would add convenience and perhaps safety for those who use public transportation.
The report also concluded that well-connected bicycle, walking, and transit safety and comfort features can contribute to increased rates of physical activity, which has multiple benefits.
Neilson said after the report is presented to the board, coordination with other government agencies and organizations will continue, as will additional analysis.
To view the report or find out more, visit www.palmbeachtpa.org/us1