State Rep. Mike Caruso easily won re-election to his District 89 seat, buoyed by in-person votes both early and on Election Day.
The final margin was 56% for the Republican incumbent to 44% for Democrat Jim Bonfiglio.
With 98% of the vote counted (the last point that election officials posted a breakdown), Bonfiglio outpaced Caruso in the vote by mail, 28,673 to 21,121. But Caruso was the early voters’ choice, 20,918 to 11,312, and the Election Day favorite, 13,427 to 4,335.
“Delray seaside I basically tied, and Delray Beach is a Democratic stronghold, so I feel pretty good about that,” Caruso said. 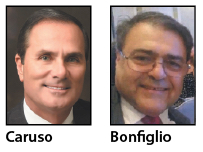 Bonfiglio said pre-election polls showed him winning and led his campaign strategy astray.
"The messaging was wrong and we didn't get the votes we thought we were going to get," he said.
The outcome was a far cry from their first matchup in 2018, which included an automatic machine recount, a state-required recount by hand and a lawsuit by Bonfiglio to have the result tallied before the governor’s contest was counted. Caruso won by just 32 votes out of 78,474 cast.
This year’s official ballot total, with 100% of ballots counted, was 101,577, and Caruso enjoyed an 11,241-vote cushion.
House District 89 extends north from Boca Raton along the barrier island to Singer Island.
Caruso said he’s had little chance to wind down from the campaign following the decision by his wife, Tracy, to run for mayor of Delray Beach.
“What I thought was going to be a calm post-election proceeding has turned into a pre-campaign crisis for lack of a better term,” he said.
Bonfiglio said it was "not definitive but probable" that this was his last political campaign.
"I'm 67 and it's time for me to take some time off," he said.Ú