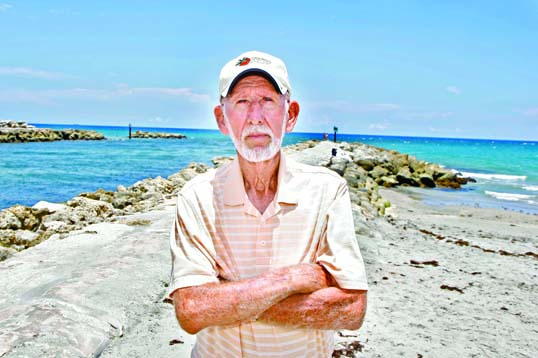 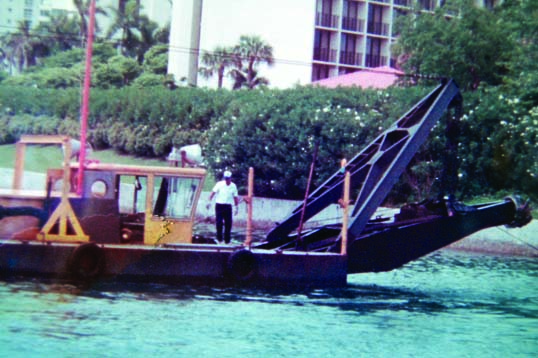 Capt. Al Bitterling stands on his barge sometime in the 1980s.

When Capt. Al Bitterling was hired to dredge and maintain a navigable water depth in Boca Raton Inlet back in 1972, he had to start from scratch. The inlet was silted over.
“It was shut down,” the retired dredge captain recalled recently from his home in Boca Raton. “I had boats running through in two months, and it’s never been closed since.”
Bitterling retired in 2013 after nearly 41 years as the city of Boca Raton’s first dredge captain. He helped the city launch its first dredge and tugboat used to keep the inlet clear in 1972.
Bitterling recalls assembling the first dredge at Lake Wyman Park and pushing it into the water with a bulldozer.
The city assumed responsibility for maintaining Boca Raton Inlet in 1972, the year the Arvida Corp. deeded it to the city.
Before the city’s dredging program, the inlet would fill with so much sand from time to time that it was not navigable, Assistant City Manager Mike Woika said.
The city hired its second dredge captain, Juan Garland, in February 2013, a month before Bitterling retired.
Born near the ocean in Egg Harbor, N.J., Bitterling worked with boats most of his life. He studied Naval architecture as a young man, worked as a fireman on a Navy tanker after World War II and operated his own boat yard in the island city of Brigantine, N.J., in the early 1950s.
He learned to scuba dive back when scuba technology was still new and worked as a police officer for the city of Brigantine.
His ability to dive made him the underwater search-and-rescue man for that coastal area of New Jersey.
Bitterling built himself a dredge in 1953 and used it to create water deep enough for boats to reach slips at his boat yard.
Waterfront property owners took notice. They stopped by the boat yard and asked him to dredge behind their homes. Before long, Bitterling was doing more dredging than boat repair and became a dredging contractor.
After a New Jersey developer went belly-up, leaving Bitterling with no money for work performed, he decided to move to South Florida in 1968, partly to escape the cold of his native New Jersey.
He worked for a friend in the air freight business at Miami International Airport for several years until he spotted Boca Raton’s advertisement for the dredge captain’s job in 1972 and was hired.
Bitterling said his starting pay was $4.50 an hour, but he was allowed to work overtime that first year. After a few years maintaining the inlet, he began to supplement his income by skippering drift-fishing boats.
He ran several boats from the Helen S fishing fleet based near Hillsboro Inlet and the Sea Mist III drift boat based in Boynton Beach, working in his spare time from 1974 until the late 1980s.
Bitterling fell in love with fishing, and so did his wife, Marie.
“I never fished one day without her,” Bitterling said while staring at a wall in his living room filled with photos from fishing trips with his late wife.  “She was my pal.”
The two of them caught a tiny 4.5-pound blue marlin in the 1970s and sent it to billfish researchers at the University of Miami. A skin mount of the tiny marlin hangs on his back porch next to a Miami Herald column about the catch.
Bitterling had time to fish because keeping Boca Raton Inlet free of sand was not always a full time job.
The inlet usually requires about 100 days of dredging a year, he said.
Work required of the dredge captain and his crew includes maintenance of the dredging equipment. And the need for dredging is dictated by weather. Heavy winter winds or hurricanes can  in a short time move enough sand into the inlet to make it too shallow for navigation.
Bitterling said there were times when he left work on a Friday and returned Monday to find the inlet filled with sand.
A black-and-white photo on his wall shows Bitterling walking across car tires that were strewn across the beach south of Boca Raton Inlet following a hurricane — remnants of the Osborne artificial reef project that placed 2 million tires into the ocean in 65 feet of water south of Boca Raton in Broward County.
“You could walk from (Boca Raton Inlet) to Deerfield Beach without touching the sand,” Bitterling said while showing the photo of a beach littered with tires.
The tires broke loose from the reef during storms and wound up on far-away beaches. They were eventually removed in a 2007 cleanup.
Bitterling lives on a canal in Boca Raton with his 32-foot Albin Sportfisher tied to a small dock in his backyard, ready to head offshore to fish for golden tilefish and other deep-water fish.
Even though his wife has died, Bitterling still has family members living nearby to accompany him on fishing trips.
Daughter Sharon Manos lives in western Boca Raton, and daughter Linda Bitterling lives in Delray Beach. He also has five grandchildren and two great-grandchildren living in South Florida.
Even though he’s 85, Bitterling still plays golf, considers himself in excellent health and is not even thinking about selling his boat.
“I’ve never been without a boat since 1953,” Bitterling said, “and I’ve owned six boats at one time.”